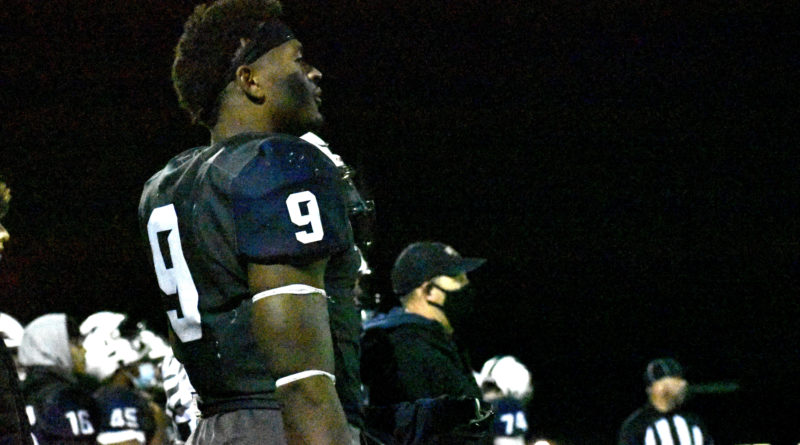 BELLINGHAM, Wash. — After overcoming a nagging ankle injury to get back to the field in the middle of the season, Ben Schlenbaker said he felt about “97 percent” healthy on Friday night.

Oh, what a fright that final three percent must be.

Two weeks after becoming the program’s all-time leading rusher, Schlenbaker ran 14 times for 231 yards and six total touchdowns — 5 in the first half — to lead 4-seed Squalicum to a first round playoff win over state 2A newcomer 13-seed Highline, 49-14, at Bellingham’s Civic Stadium.

The win sends the Storm (6-2) to its first 2A state quarterfinal appearance since 2015, the last time they made the playoffs. They face the winner of No. 5 Ridgefield and No. 12 Orting, which play at 5 p.m. Saturday.

“It’s exciting,” Schlenbaker said. “That’s our goal for this year, to keep pushing, making it to the ‘ship. That’s all we want right now.”

Schlenbaker, who suffered the ankle injury in Week 3, missed the following week and has played at less than full strength since, was every bit the 6-foot-2, 210-pound running back Pac-12 coaches lined up to offer.

The Pirates opened the game with a 12-play, 60-yard drive that ended in a missed 23-yard field goal attempt.

From there, Squalicum took control.

Schlenbaker ran 63 yards untouched on his second carry of the game and quarterback Leyton Smithson hit Kai Posey for a 17-yard touchdown pass on 4th and 11 on the next drive to go up 14-0 early in the second quarter.

Highline’s night went haywire two drives later after a head-scratching fourth down decision. Facing 4th and 1 from its own 11-yard line, the Pirates opted not to punt, and were stuffed short on a run up the middle.

Schlenbaker scored his second touchdown — and 11-yard run — on the next play. He scored four more times in the final 5:42 seconds of the first half on runs of 17 and 50 yards and pounced on a forced fumble in the endzone to help Squalicum take a 42-0 lead into halftime.

His night on offense was done when he took the second play from scrimmage in the second half 45 yards for touchdown.

“It was clear there was a D-I body out there,” Highline coach Deontae Cooper said.

Highline’s defense put as many as 10 players in the box to combat the 6-foot, 215-pound Washington State commit in the backfield.

“The offensive line did their thing, kept working and they just started being very powerful and moving those guys,” Schlenbaker said, “going to work, I guess.”

After dropping consecutive games to Lynden and Lakewood by a combined four points while short-handed in Weeks 3 and 4, Squalicum has gotten healthy — and is looking like a 2A contender.

TANDEM OF SCHLENBAKER, LAMB YEARS IN THE MAKING

Before Schlenbaker and senior linebacker Bryson Lamb lined up next to one another in the linebacking corps leading the Storm’s defense, they struck a friendship started as fourth grade youth football teammates.

In the years that followed, they built an on-field chemistry that is taking the state by … storm.

“Our chemistry’s always been there,” Schlenbaker said. ‘He’s always been blocking for me on offense, so I always know I can trust him, and on defense we can trust each other, because we’re both the biggest guys out there. We do our work.”

Lamb was responsible for the death-blow defensive play of the night, in addition to several tackles for loss.

With 7.7 second left in the first half, Pirates backup quarterback Marcus Postlewait went to roll on a run-pass option and was met by the 6-3, 225-pound Lamb, who jumped the fake to perfection after studying the quarterbacks tendencies in film throughout the week, and delivered a booming hit that jostled the ball loose in the endzone.

Schlenbaker pounced on it for six points to send the game to running clock with a 42-0 lead.

“He knocked that dude so hard,” Schlenbaker said.

Whether it’s Lamb and Schlenbaker causing havoc in the middle of the defense, or Lamb serving as Schlenbaker’s lead blocker on the O-line, the two are in sync.

Burlington-Edison (5-3), Sedro-Woolley (6-3) and Lakewood (5-4) all sat at home, team gear already returned, while the Storm’s point fast-growing point total lit up the scoreboard like a slot machine.

That’s because of how the WIAA district allocations broke for the 2021-22 school year, which shrunk the 2A Northwest Conference’s usual three berths to two.

It created one of the most compelling storylines in 2A all season: the battle for the Northwest Conference’s much-coveted two spots.

Lynden and Squalicum won out, while the WIAA RPI’s No. 12 Lakewood, No. 15 Burlington-Edison and No. 18 Sedro-Woolley (which beat Lakewood 44-0) were sent packing, and an allocation system designed to represent the state proportionately left playoff-caliber teams in the lurch.

“I hope we can figure out a way to at least get another team or two an opportunity to cross over in Week 10,” Squalicum coach Nick Lucey said. “But there are some things that need to take place at the WIAA level … I feel for those teams.”

BEHIND FORMER HUSKY, HIGHLINE HAS EMERGED FROM ‘DARK DAYS’

When Cooper, a former University of Washington football tail back, was hired at Highline in 2019, more than 20 years had passed since the program’s last winning season.

Five players showed up to his first team meeting.

His second year — the pandemic-shortened spring 2021 season — the Pirates went 2-2.

This year, they moved from the 2A SPSL to the 2A KingCo and ran the table (6-0) in league play with just five senior starters and the bulk of its core returning, led by its freshman quarterback (Rasmussen), sophomore wideout Marquawn McCrany and junior running back Maki Piper.

“We’re coming with a purpose next year,” Cooper, who is beloved by Husky fans despite a career marred by injuries, said. “This is going to be a place that we get used to being in an environment that is familiar to us.”

During that first team meeting, Cooper felt a little in over his head when only five players showed up. Coming from a California powerhouse in Citrus High School, he only knew high school football as a big deal within the high school setting.

Still, that night, he rounded up the five players, they put their fists together in a huddle and he gave them their first pep talk.

On the field in the pregame Friday, they joined fists in the same way — this time with a full team on a playoff stage.

“Just to see them get through the dark days and see some light shine, that’s encouraging,” Cooper said. “And they also set the foundation to see what it looks like. They went through a lot of ugly days and saw some fruit, and now our young guys can reap those benefits. We set a really strong foundation.”