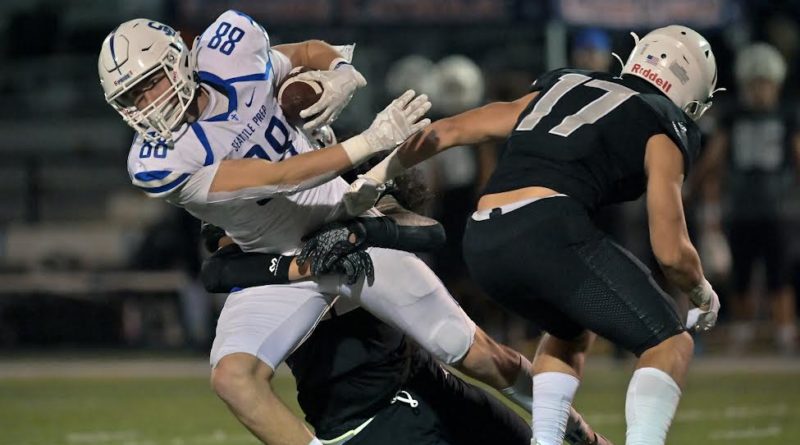 Seattle Prep linebacker Austin Harnetiaux’s approach to the playoffs called for a little dose of mental amnesia in the moments after an emotional round-of=32 road win over Mountain View on Saturday.

“Flush it,” Harnetiaux said. “Flush this victory … we want to keep this jersey on for as long as we can.”

It’s an approach he may have heard from his coaches. But a clear memory might serve the Panthers — or any of the five Metro League teams in the WIAA Class 3A state-tournament field — well this month, tapping into close-game experience and strength of schedule in what’s been regarded as the classification’s toughest league in recent years.

The Metro League has five teams ranked No. 21 or higher in the WIAA’s RPI Index’s. Seattle Prep is the only team without a win over a team in the 3A field (though it beat 1A 8-seed Mount Baker), and its four losses are against the other Metro League teams in the bracket.

In a classification seemingly dominated by a Metro League presence, this year’s 16-team state field has the most teams (five) from that Seattle-area league in more than a decade.

It’s not out of the realm of possibility, but to happen, will call for a few upsets.

In order to do so, 2-seed Eastside Catholic must slow No. 15 Stanwood’s high-octane ground attack, and 3-seed O’Dea must beat red-hot No. 14 Kelso, No. 9 Rainier Beach must win on the road at 9-seed Peninsula, as do 12-seed Garfield (at Marysville-Pilchuck) and 13-seed Seattle Prep (at Yelm).

If you consider this a long shot possibility, consider this: A non-Metro League team hasn’t played in a 3A state championship game since Kamiakin in 2015.

So, will five of the surviving eight state quarterfinal teams all hail from the same league?

Don’t be surprised if that happens.

What to watch for: After running the table in the 3A PCL in the spring, the Sentinels built a postseason appetite – but had to wait months for another shot to play their first meaningful playoff games in years. COVID pauses and cancelations have kept Spanaway Lake off the field at times, but here they are. Four-star receiver/defensive back Jasaiah Wagoner is a load to keep track of, and breakout sophomore power back Josh Collie will run into the biggest defensive front its seen all year — led by the MCC lineman of the year (Ayden Knapik), the conferenced defensive player of the year (Bronson Childs) and Myles Mayovsky, who earned all-state praise as a sophomore leading the Lions to the 3A. state semifinals in Randy Affholter’s first year at the helm. That defense is giving up 10.9 points per game.

What to watch for: After back-to-back midseason losses to Mountain View and Skyview, the Hilanders have won four consecutive games, and recently sent undefeated Auburn Riverside home after a round-of-32 road victory in Week 10. Ground game is flourishing behind Conner Noah and Judah Calixste. How will that fare against O’Dea’s sturdy defensive front? And can Kelso stop Jason Brown Jr (203.6 rush yards per game)? The Fighting Irish, who have played in three of the past four 3A state championships (won in 2017), are still searching for consistency on offense.

What to watch for: Arlington sent shockwaves across the state when it dealt streaking. No.  5 Marysville Pilchuck its first (and only) loss. But the Eagles themselves weren’t overly surprised. Two standout seniors and multi-year starters lead the way on offensive (Trent Nobach) and defense (Quinton Yon-Wagner). What happens when they host a Mount Spokane defense that will turn you over and shut you out (20-0 over Gig Harbor in Week 10)? Wildcats Texas A&M-bound placekicker Ethan Mocskulski could be the difference in a close game.

What to watch for: Watch out – this Crusaders’ defense at full strength is a scary sight. It’s forced 30 turnovers in eight games, logged 29 sacks, 37 tackles for loss, scored six defensive touchdowns and holds opponents to a 17 percent third-down conversion rate. They face a tall task in Stanwood, which has scored 43 points per game in its past three contests. RB Ryder Bumgarner averages around 158 yards per game, and is coming off of a 284-yard Week 10 outing in a state play-in victory over Lincoln of Tacoma. Stanwood is playing its first playoff game since 1996.

Side note — Crusaders DC Marcus Ungaro and Spartans coach Jeff Scoma overlapped briefly on Bellevue’s coaching staff in 2019, before Ungaro was offered a coordinator role with the (now-defunct) Seattle Dragons of the XFL.

Statistical leaders: Garfield — Jacolby Cochran is the team’s most dynamic weapon, as a route-running wideout, a lockdown DB and return specialist. Kicker Marcus Merkelbach has range and could be the difference in a close game. Denali Dukes is the lead rusher and two-sport standout Raphael Justice has come into his own as a lockdown corner. Marysville-Pilchuck: QB: Jace Luton (22-42, 377 yards, 2 TD, 3 INT); RB: Dylan Carson (144 carries, 1,859 yards, 38 TD), Jordan Velasquez (56 carries, 887 yards, 14 TD).

What to watch for: Know what’s more defeating than knowing what Marysville-Pilchuck is going to run? Knowing it’s the slot-T attack and not being able to stop it. Dylan Carson and Jordan Velasquez are approaching a combined 3,000 yards on the ground running behind a senior-laden line to an average of 49.2 points per game. The Bulldogs only start four seniors, but don’t let age fool you. A balanced, aggressive offensive attack helped net them wins over No. 12 Seattle Prep and Ferndale – and a close loss to No. 2 Eastside Catholic. High-motor WR Jacolby Cochran gets defense’s best cover man – and usually comes out on top.

What to watch for: Get your popcorn out and say a prayer for your team’s stat-keeper – these are two high-octane offenses colliding. Yelm ran the table, including early-season wins over round-of 32-qualifying opponents (Lincoln, Mount Si, Mead), behind standout wideout/cornerback/return specialist Kyler Ronquillo, linebacker/running back Brayden Platt and standout linebacker Ray Wright. The Panthers counter with big-play quarterback Braeden Smith, who is capable of just about anything.

What to watch for: Peninsula enters the playoffs relatively unproven in big games this fall. The Seahawks appear much improved from their season-opening drubbing from No. 1 Bellevue, but the would-be 3A SSC title-game against No. 4 Yelm was canceled (COVID-19). Meanwhile, Rainier Beach’s resume for a home playoff game was convincing enough on paper — a 41-0 win over No. 14 Garfield and 46-35 win over No. 12 Seattle Prep and one-point losses to 2-seeds Eastlake (4A) and Eastside Catholic – but not by the selection committee. Still, a tough-as-nails defense and offense coming into form spell trouble for any opponent.

What to watch for: Top-seeded Bellevue hits opponents with a heavy dose of Wing-T – the old-school variety. And even though the Wolverines might not be doing it with recruit chart-topping talent, they are still getting it done convincingly. Bruising running backs William Wang and Blake Teets, speedy junior Ishaan Daniels around the edge and a more than reliable pass-catcher in sophomore tight end Hogan Hansen lead a collective approach. Their opponent is no ordinary 16-seed – playoff-mainstay Lakes. This Dave Miller-led Lancers group has overcome a series of early-season injuries to make the state field, and boast a talent-laden offensive operating under the steady hands of fifth-year quarterback Justin Brennan.