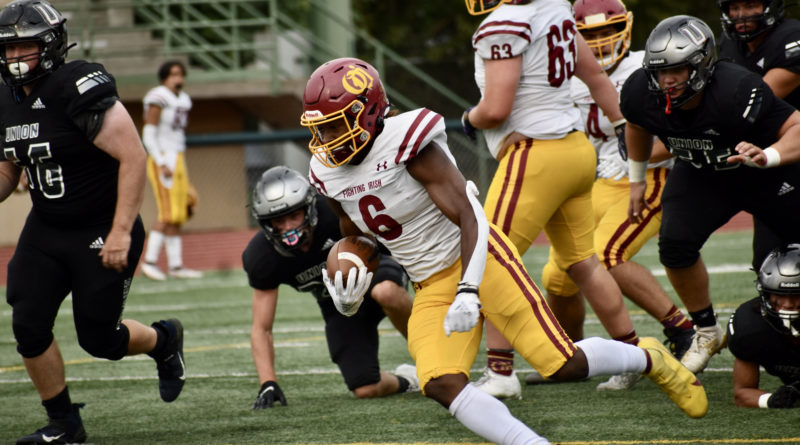 SEATTLE – Once they stole momentum, the O’Dea Irish never gave it back on Friday night at Memorial Stadium in Seattle.

O’Dea rushed for 411 yards against visiting Kelso, and ran away with a 52-13 WIAA Class 3A state first-round playoff victory. The win sends the Irish into a state quarterfinal either Nov. 19 or 20 against the winner of the game Saturday between Spanaway Lake and Kennewick in the Tri-Cities.

Kelso opened the game with an efficient drive that saw the Hilanders (8-3) move from their own 28-yard line to the O’Dea 11, where they had a third-and-1. Trying to throw for it, quarterback Hunter Letteer was sacked for a loss of seven.

On fourth-and-8, Letteer was sacked again to end the threat.

“The defense, once they got their feet under them, got up to game speed, they just did a nice job all night,” O’Dea coach Monte Kohler said.

Here are four observations from the O’Dea-Kelso game:

It took the Fighting Irish all of four plays to traverse the 79 yards in front of them, thanks to a 54-yard burst off the left interior from senior Khalil Holiday.

The next five O’Dea possessions began at the 50-yard line or better. The Irish took advantage of the field position to score on the first four of those drives.

The fifth, which began at the Kelso 35-yard line, came with just 25 seconds remaining in the half and didn’t even net a first down. It didn’t matter as O’Dea took a 31-0 lead into halftime.

Two of the five drives came courtesy of Hilanders’ fumbles. The first set up Jason Brown’s only score of the night, to make it 14-0. The second extended the lead to 31-0 on Saverino De Simone’s 26-yard field goal with 1:21 remaining in the half.

PAST RUSHES INTO THE PRESENT

Overall, 10 O’Dea players ran the football for a total of 411 yards. Four of those guys scored touchdowns, led by Holiday’s pair of scores in the first half. Holiday also gained all but 14 yards of his game-high 117 on the ground in the first 24 minutes, while super sophomore Brown contributed all of his 67 yards in the first half, too.

“It’s amazing,” Holiday said. “Just give thanks to the ‘O’ line. They’re just great. They do their job and that’s what we do.”

The big rushing numbers aren’t just a continuation of this year, but of a history between these two schools. Friday was the fourth playoff meeting between the Irish and Hilanders since 2013.

MOMENTUM CAN BE TOUGH TO GET BACK

As the Hilanders took the opening kickoff and started to move the ball, this one looked like it could be competitive. But then the two consecutive sacks happened, and all was lost.

And Kelso managed just 29 yards of offense the rest of the first half after that.

“You get down to third-and-1, you’re moving the ball,” Kelso coach Steve Amrine said. “If you don’t score against a good team, take advantage of the opportunities, they’ll take advantage of it and they obviously did.”

By the time Letteer hit Zeke Smith for a 30-yard touchdown pass to put Kelso on the board with 7:56 to go in the third quarter, the Hilanders trailed it, 38-0. Kelso’s only other touchdown came after the running clock was in play.

Christian Winn had made the mercy happen with a 28-yard run to put O’Dea up, 52-6, with 10:53 to go. One play later, Letteer threw outside to Colby Cooper, who immediately pitched the ball to a charging Conner Noah.

Noah took the pitch and raced 53 yards down the sideline to make it 52-13 with 10:01 remaining. Neither team scored again.