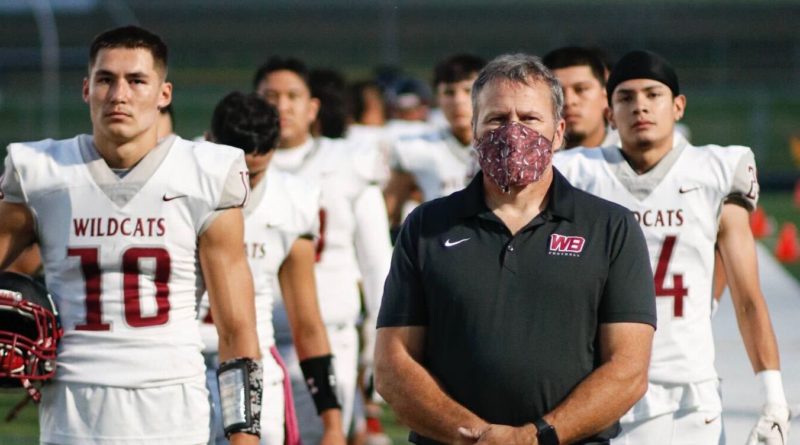 It was the fall of 1996, and Smith was a recent Western Washington University grad and first-year high school football coach at Mount Baker. He was sent out to study the Golden Eagles’ vaunted Wing-T attack as a part of Mountaineers coach Ron Lepper’s efforts to install the same offense at Mount Baker the following season.

Smith’s stint on Lepper’s staff was short-lived, but his connections to Mount Baker run deep. His brother, Jesse Morris, played for Lepper in the late 90s. His mom, Melody Morris, taught in the Mount Baker School District for decades.

Since then, Mount Baker has deployed one of the most prolific Wing-T offense in Class 1A.

And this week, Smith is gearing up to defend the very system he helped construct.

When No. 9 Toppenish (10-0) takes on No. 8 Mount Baker (6-3) at Bellingham’s Civic Stadium in the first round of the 1A state playoffs on Saturday, it will be the first time Smith, now the Wildcats’ coach, goes head-to-head with one of his foundational coaching mentors.

Toppenish hasn’t made the state playoffs since 1996. In 1997 — Lepper’s first year running the Wing-T — Mount Baker made its first state playoffs.

After a year on Lepper’s staff, Smith moved to central Washington and spent two years coaching at Selah. He left coaching for more than a decade, but when the Toppenish job opened up in 2008, he jumped back in and has led the Wildcats ever since.

Smith knows as well as anyone that defending the run-heavy, misdirection-based attack is more about staying disciplined on defense than knowing what the other team is going to do.

Stopping — or even slowing — the Mounties present a whole new challenge.

On Sunday, Lepper broke the news of the WIAA seeding matchup to him in the form of a text.

“It adds a little more to the intrigue” to the matchup, Lepper said. “He’s put a lot of time and effort into that program and I’m really happy for them. You’ve got to take advantage of that. Undefeated seasons don’t come around very often for programs.”

“When you’re going against your mentor, and he knows everything you do because he told you everything to do, that’s a little intimidating,” he said, with a laugh.

What to watch for: Contrasting styles clash between the Beavers’ run-heavy offense (432.5 yards per game) led by Oregon State-bound Takari Hickle takes on more of an RPO led by junior first team all-1A Northeast dual-threat QB Boen Phelps. Both teams have taken narrow losses to teams in the field — Tenino a two-point loss to No. 2 Eatonville, Freeman with losses to No. 4 Lakeside (20-17) and No. 7 Riverside (24-14). Beavers are battle-tested in the loaded 1A EvCo.

What to watch for: After opening the season with lopsided losses to strong 2A opponents, the Lyncs are hitting their stride defensively with three consecutive shutouts, including one of No. 8 Mount Baker. Offensively, Will Colwell’s calm handle of the offense and ability to pass and take off on his feet has been complemented by Kade Eldridge flourishing as a thundering rushing option after moving over from tight end following a season-ending injury to starting RB Kayden Mellema. Granite Falls needs to establish the run to succeed, but can it against a Lyncs group playing with newfound confidence?

What to watch for: Outside of a narrow 6-0 loss to No. 4 Lakeside, the Rams have beaten two playoff teams (2A Shadle Park, No. 11 Freeman) and won in a variety of ways. But the streaking Bulldogs may present the Riverside defense with toughest task to date — slowing Isaiah Pierce, who torched La Center for 295 all-purpose yards in the district round. Montesano, a perennial 1A EvCo power, is playing its best football yet, overcoming offseason (major injuries) and early-season (COVID pause) obstacles to win three games in a row. Free advice to the Bulldogs’ offensive staff — don’t throw Jordan Nortz’s way (10 picks).

What to watch for: The Cruisers’ offense (41.5 points per game) doesn’t appear to have a weakness, and only needs an ounce of space to make a house call. But East Jefferson — a second-year Chimacum (2B)/Port Townsend (1A) co-op — isn’t afraid of the challenge under first-year coach Tony Haddenham. To compete, it will need to take a page out of La Center and Tenino’s book and establish its well-oiled ground game and keep Eatonville’s offense off the field — and out of the end zone.

What to watch for: The Leopards had to pivot quickly when the player its power-spread offense was built around — four-year starting QB Clay Delp — broke his collarbone midseason. They’ve utilized a rush-heavy offense behind two-way standout Braydon Flood and a quickly expanding playbook for new starter Jon VanCleave to string together a late-season run. Can its Zan Delp and Flood-powered defense, which has allowed fewer than 10 points per game, hold up against a balanced Knights group, which took its first loss by seven in a tune-up against 2A Lakewood, and has outscored opponents by an average of 34 points per game?

What to watch for: It’s as much a battle between leagues as it is opponents. Both teams have swept their own backyards, but are largely unproven out of area. The Eagles boast as balanced an offense as you’ll find in 1A (187.8 yards passing, 169.3 yards rushing per game) with as steady a signal-caller as there is statewide in 1A Northeast League MVP Kole Hunsaker, and a defense that has accounted for 20 interceptions on the season. The Pioneers, a state quarterfinal team in 2019, holds a postseason experience advantage over the playoff-newcomer Eagles, and has a 1,000-yard rusher in do-it-all senior Kessler Fjellman and an up-and-coming dual-threat quarterback of their own in ninth grader Beau Sackman.

What to watch for: This may be the best game in the first round. The Wildcats thought going 10-0 was good enough to secure a first round home game. Instead, they must hit the road and take on a 1A playoff mainstay. Toppenish has playmakers everywhere, including a state player of the year candidate in WR/DB Jason Grant. But its wins haven’t come as easy against run-heavy teams and the Mounties might be the best they’ll see to date. After moving linebacker and another state player of the year candidate Davin Beason under center, Mount Baker found a rhythm on offense and has two running backs — Jesse Sande and junior Marcques George — who can go the distance on a moment’s notice.

What to watch for: Royal has been on top of 1A for long enough (haven’t lost since 2018) to intimidate an opponent by just stepping on the field. This year, any initial concern that its offense wouldn’t be quite as prolific without QB Caleb Christensen were silenced — quickly. All-state linebacker Derek Bergeson has been masterful under center, and the Knights defense hasn’t allowed a whole lot of traction. The 1A Nisqually runner-up Vikings have their work cut out.