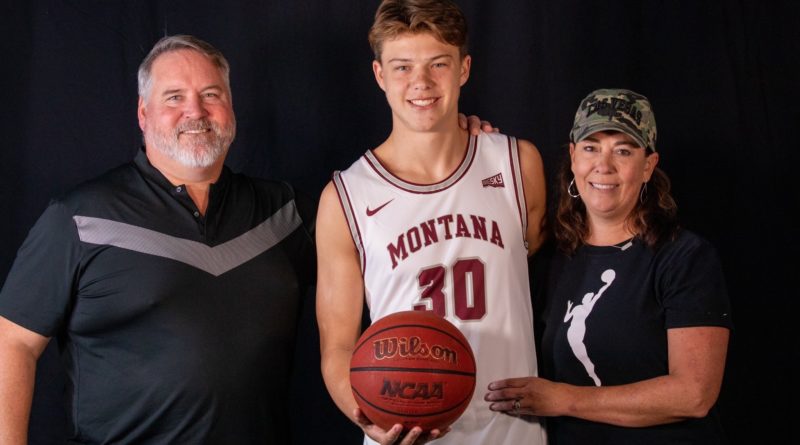 If you knew Jaxon Nap, and hadn’t seen him since before the COVID-19 pandemic, there’s a chance you might wonder if it was an older cousin, or a body double signing his national letter of intent on Wednesday afternoon.

Nap, a 6-foot-7, 200-pound senior, who made his pledge to the University of Montana men’s basketball program official in a ceremony at Hazen High School on National Early Signing day, hit a seven-inch growth spurt over the course of a year and a half when few eyes were on him — and fewer opportunities to play even existed.

“It’s definitely set in,” Nap said, “but it hasn’t soaked in. It’s still crazy that in seven or eight months I’ll be headed off to a college campus to play college basketball still.”

At a time when recruits have been impacted by colleges giving active players more eligibility, and college coaches were sidelined by a recruiting dead period as a result of the pandemic, Nap’s recruitment stands out as a success story.

He stood 6 feet tall at the onset of the pandemic in early 2020 and grew from an under-sized guard who wasn’t receiving any college interest, to an NCAA Division I-caliber prospect.

It’s a physical change he’s still getting used to.

In March 2020, since school, basketball and much of life was shut down because of COVID-19, Nap started to feel sharp growing pains and his appetite expanded to where he felt like he was eating twice the food he was previously.

He describes being in constant pain and always tired. He’d sleep well into the afternoon and grew nearly four inches in three months.

“My whole body felt worn down all the time,” Nap said. “But it was the perfect time to feel like that. Nothing was happening.”

Basketball gyms, schools and even many outdoor parks were shut down in the early days of Washington’s prolonged stay-at-home order. So most days, he drove to Sumner, where his grandfather had bought and renovated a middle school to turn into a workspace.

Nap discovered two hoops and a small indoor court in the old school. For months, he organinzed pick-up games with friends and pent-up college players. The gym became his laboratory, and his pandemic sanctuary.

“That really helped me, especially through my growth spurt,” Nap said. “It allowed me to go through the growing pains of trying being a guard and being taller in the shadows.

“I made some pretty big strides.”

As he hooped daily, he also lifted weights to try to add muscle to his growing frame. As his game in his new from developed from awkward to presentable, he spent months in 2021 waiting for the opportunity to show the world — and college coaches — the new him.

Once he returned to the court, first for the shortened seven-game high school season in the spring, then for a summer playing AAU with Friends of Hoop, people who saw him marveled at how much he’d grown.

By July, word reached Montana head coach Travis DeCuire. After seeing Nap one weekend at a tournament in California, he went out of his way to fly to Beaverton, Ore. to watch him play the following weekend. FOH added a game to its schedule against the top team in the tournament — Idaho Select — just so DeCuire could see more of Nap up close.

“It was the first time I had really seriously been looked at,” Nap said.

“His touch around the rim, he had one of the better floaters and his advantage then was he was a bigger guard,” Friends of Hoop coach Donald Brady said. “Then everyone caught up to him physically.”

Playing without a size advantage forced nap to tighten up his handle, and find ways to score and defend that didn’t just hinge on length and athleticism.

Said Brady: “Then all of a sudden that growth spurt came and his game came back.”

Playing for Hazen, he averaged more than 30 points and 10 rebounds per game in an unofficial high school fall league hosted by Bellevue College, and had a 54-point outing against Jackson.

His growth spurt has accentuated skills he already developed as a smaller guard.

At 6-7, he can get his shot off easier and release higher on contested jump shots. He takes defenders off the dribble more willingly, drives into the paint with more confidence and utilizes his length and brawn physically on defense.

“Now I feel like I have a size advantage over a lot of people,” Nap said. “Even big men, I feel like I can put a little bit of a hurt on them if I put my body and chest into them.”

Nap admits he still has a long way to go — and maybe even more growing to do, but plenty of time to do it. His development as a player stemming from his growth spurt has re-defined his basketball goals.

After college, Nap now aspires to play professionally and “see where basketball can take me.”

Here are the other Washington high school boys basketball players who signed letters of intent to play for Division I basketball programs on National Early Signing Day:

Bilodeau was the breakout player of the shortened spring season in Washington, elevating from a solid rotation guard/forward to a dominant 6-foot-8 difference-maker who can shoot from deep, bang down low with and finish around the rim. He’s the son of Cass Bauer-Bilodeau, who played it the WNBA, and Brent Bilodeau, a former first round NHL Draft pick, and a preseason 4A state player of the year candidate in 2021-22. He committed to Wayne Tinkle and the Beavers of the Pac-12 Conference in late October and signed and faxed his letter to Corvallis, Ore. on Wednesday afternoon.

Hansen has been a four-year contributor for the Knights and played an instrumental role in the team’s 1A state title run in 2020 and returns as one of the top high school players in 1A statewide.

As a sophomore, Patterson came off the bench and scored 14 points in the 4A state semifinals and helped the Wildcats win the state title. He’s grown into a gifted scorer, facilitator and is poised to be among the top 4A players in the state in 2021-22.