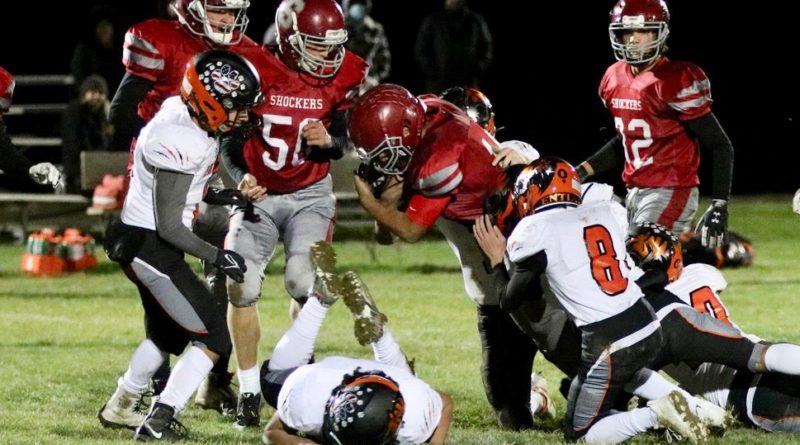 The dream has become reality for Waterville-Mansfield. The Shockers have returned to the promised land of the WIAA state football playoffs for the first time since 2006.

“Great players make coaches look good,” Shockers coach Tayn Kendrick said. “All credit goes to our three four-year seniors who have stuck with us. They’ve created a culture that other kids want to be a part of.”

Those seniors – Jack Katovich, Braydon Murison and Kaneem Island – won only one game in each of their first two seasons as Shockers. They “caught lightning in a bottle,” Kendrick said, last spring during the COVID-delayed and truncated season, and went 2-2.

This fall, Waterville-Mansfield has capitalized on that bit of spring success by winning five games (5-3) and advancing to the playoffs for the first time in 15 years. The Shockers have lost only twice since opening weekend, both to district champion Liberty Bell.

The second loss to the Mountain Lions came three weeks ago, and cost the Shockers their leading receiver to injury – tight end Marshall Mires. He will not play against the speedy Comets on Saturday.

“They are worthy of a high ranking,” Kendrick said of the Comets. “We need to make sure to get a hat on a hat, and stay in control of ourselves.”

What to watch for: Will it be the passing game of the Irish or the multi-threat running game for the Cardinals that ultimately will prevail. Winlock has allowed just 18 points total in its past two games, seemingly peaking at the right time.

What to watch for: The Mountain Lions can throw the ball as well as gain with their run game. But the Panthers only losses this season are to two teams waiting for winners of this week’s first round games – Almira/Coulee-Hartline and Odessa – and playoff-bound Wilbur-Creston-Keller.

What to watch for: The Shockers like to run downhill and don’t attack the perimeter much, while the Comets have a strong defensive line and speedy linebackers that flow to the ball. That speed for Naselle has resulted in quick possessions all season for the offense, and will require Waterville-Mansfield to stay disciplined.

What to watch for: The key this week will be who wins in the trenches, which may seem strange for the 8-man brand, but the Wildcats have used a power inside running game to score more than 50 points in all but one game this fall. The Red Devils must curtail that attack to have a chance.