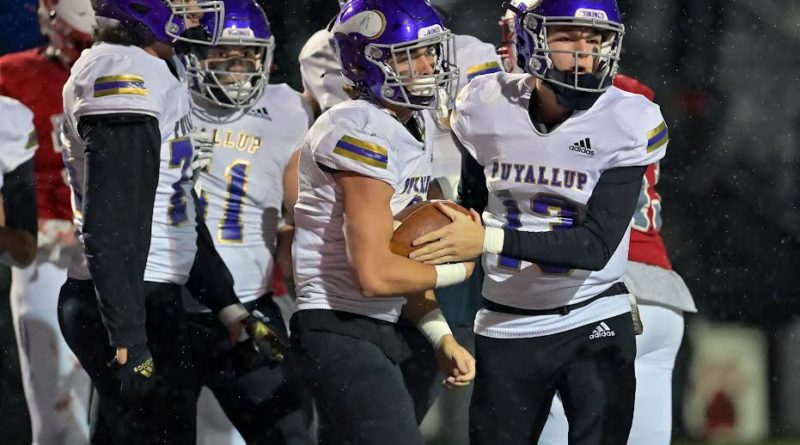 SNOQUALMIE – The 10th-ranked Puyallup Vikings felt under-appreciated by the Week 10 playoff seeding committee after learning that as the No. 3 seed from the 4A South Puget Sound League they were being sent on the road to play Mount Si.

The Vikings thought they should have had a home game for the preliminary round.

Puyallup made the best of the situation, however. The Vikings forced four turnovers, Grant returned two interceptions for touchdowns and Puyallup raced away with a 35-14 victory that puts it in the WIAA state bracket, which will be released Sunday.

Here are four observations from the Puyallup-Mount Si game:

WE DON’T NEED NO STINKING OFFENSE

Both of Grant’s interception returns went for the same 68 yards. Both came during the third quarter.

And at least in part because of those interception returns, the Vikings never ran an offensive play in the quarter while still extending their lead from 14-7 at the half to 28-7. Grant’s first came with 8 minutes, 13 seconds to go in the quarter – on Mount Si’s first possession to open the second half.

The Wildcats (5-5) had moved the ball smoothly from their own 25 to the Puyallup 36. Quarterback Avery Walker completed four of his five pass attempts on the drive for 28 yards, but Mount Si faced a third-and-8 situation.

The Wildcats tried to run an out route and Walker threw the ball from the far hash across the field. Grant jumped the route.

“I went under him (the receiver), juggled the ball and caught it,” Grant said. As he looked up, all there was in front of him was green turf.

The second happened almost exactly in the same manner, though it came on a fourth-and-5 play from the 33. Same out route, though. Same jump for Grant. Same 68-yard return result.

“Donte just got in a great position,” Puyallup coach Brian Grout said. “It also helps he has some natural talent, plays baseball. He used those talents to make the catches and go.”

The Vikings (8-2) forced four total turnovers. And while Puyallup did turn it over twice itself, the defense did enough so that those didn’t hurt much.

Mount Si scored just one time off those turnovers, getting an Avery Walker to Liam Christensen 27-yard touchdown connection after a second-quarter interception to tie the game at 7-7. The Vikings responded two possessions later, getting Ryan Cramer’s second 1-yard scoring plunge of the game to retake the lead, 14-7, with 1:20 to go in the first half.

Puyallup held Mount Si to just 103 total yards in the first half. The Wildcats managed 196 yards in the second half, but thanks to the two interception returns never got closer than 14 points.

Mount Si coach Charlie Kinnune got what he wanted. On a few occasions during the regular season, Kinnune said all he wanted was to get into the postseason tournament and see where it would take the Wildcats.

They’d been a low qualifier before and made runs, including to the semifinals in 2019. Mount Si beat Puyallup in this Week 10 game back in 2018 – against a Vikings staff on which Grout served.

The Vikings’ offense didn’t really get rolling until the second quarter. Cramer finally put Puyallup on the board with 10:19 to go in the first half, his 1-yard run completing a six-play, 46-yard drive for a 7-0 lead.

“In the playoffs, you’re playing really good teams,” Grout said. “There is a, I don’t want to say feeling out, but a process to finding your playoff identity, your momentum to try to get rolling.”

Cramer was the workhorse, carrying the ball 20 times for 73 yards and those two touchdowns.