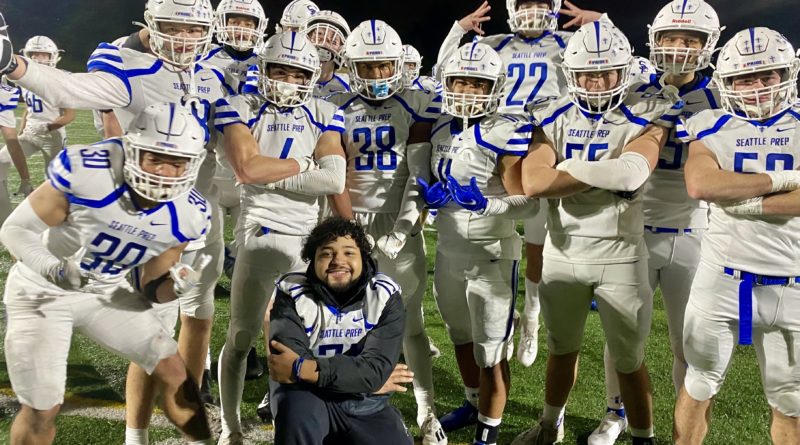 More state playoff berths were punched across the state on Friday and Saturday night — some done in dramatic fashion.

Teams that advance to state will be seeded into brackets on Sunday by WIAA seeding committees in each classification.

Here is a closer look at four compelling round of state preliminary round results:

No matter what was thrown its way — either by Mountain View or by mother nature — Seattle Prep always had an answer.

With an offense that runs like a high-speed locomotive, operated by a conductor (senior quarterback Braeden Smith) who seemingly hasn’t found a jam he can’t escape, the Panthers (6-4) extended their season into the 3A state playoffs with a 38-27 win over Mountain View (7-3) on Saturday night at McKenzie Stadium.

“We all balled out tonight,” senior linebacker Austin Harnetiaux said. “I’m really proud of this squad.”

Prep hopped up to a 14-0 lead when Harnetiuax caught a line-drive punt and returned it 38 yards for touchdown, but that hot start was cooled off by a 90-minute lightning delay late in the first quarter.

Facing 3rd and 37, Smith evaded pressure and heaved a pass downfield into a pile of defenders, bounced off one of them and landed in the lap of Panthers receiver Will Floyd for a first down.

When Harnetiaux wasn’t flying around the field on defense, he was used out of the backfield to wear down the Thunder defense out of the hurry-up offense. His one-yard touchdown run with 10:52 left in the fourth gave Prep enough cushion to hang on, but the Thunder stayed close.

Mitch Johnson hit Cayden Wotipka for a 15-yard touchdown pass to pull within 11 and the Thunder recovered the ensuing onside kick with under six minutes to play. But Prep junior safety Cooper Stephens and sophomore safety Jaden Archer both picked Johnson off in the final minutes to help the Panthers hang on.

“The control aspect was in our defense,” Harnetiaux said. “We smothered them, and I think that was the key for us.”

Stanwood felt slighted when the 3A round of 32 ranking committee sent the Spartans on the road to compete for a state bid.

So they responded, loud and clear — by outscoring and outlasting the potent Lincoln Abes offense.

Ryder Bumgarner rushed for more than 300 yards, three touchdowns and an interception and the Spartans (6-4) escaped Lincoln Bowl with a 40-35 win over No. 7 Lincoln (of Tacoma) to clinch its first 3A state berth in 25 years.

“It puts Stanwood on the map,” Spartans head coach Jeff Scoma said. “A lot of people don’t know where Stanwood is, who we are … A lot of the kids just grew up tonight in a big way.”

It’s also may be a warning sign, Scoma said, that the 3A Wesco North is overlooked. The Spartans finished fourth in the league standings, its losses coming to Arlington (8-1), Marysville-Pilchuck (8-1) and Ferndale (7-2), who all tied for first in the division.

With the loss, the Abes (7-3), a season-long Top 10 mainstay led by several high-major Division I prospects, fall short of reaching the 3A state playoffs.

Otto Wiedmann’s 25-yard touchdown run put the Spartans up 40-35 with 3:35 left. Isaiah Hughes, a 6-4 senior corner, picked off Gabarri Johnson seconds later and the Spartans converted on a fourth down to hold on.

“He’s a tenacious on-ball defender,” Scoma said of Hughes. “I think he had like four or five games in a row with a turnover in Wesco. He just went up and made a play, wanted the ball more.”

Bumgarner was the first to pick off Johnson in the third quarter with the game tied at 28-28. His third touchdown — a three-yard run — came on the ensuing drive.

The 5-9, 180-pound back has been one of the state’s most productive rushers this fall, and few saw it coming.

When Scoma, a first-year head coach who spent several years at Bellevue, installed the wing-T upon arrival in the shortened offseason, he moved the slot receiver-turned wing-T fullback already broke his school’s single-season rushing record.

Neither defense made a stop in the first half. So at halftime, Stanwood decided to send more help near the line of scrimmage to slow the run game, and help mitigate the Abes’ significant size advantage.

On the most important play of Kentwood’s season, coach Mike Bush didn’t leave it up to scheme – or chance.

He gave the football to his best offensive player, which happens to be a ninth grader.

Antoine Lee scored the game-tying touchdown on a 5-yard rumble with 4:45 remaining in regulation, and Thomas Allam kicked the winning field goal in overtime as the Conquerors upended Woodinville, 17-14, in a Class 4A state play-in game Friday night at Pop Keeney Stadium in Bothell.

Kentwood (6-4) had dropped a pair of regular-season games to 4A KingCo opponents — Bothell and Eastlake — before toppling the Falcons (6-5).

“Our guys, all year, have been resilient,” Bush said. “We’ve had our ups and downs, but we’ve had a lot of growth.”

Once trailing 14-0, Kentwood faced a fourth-and-goal play from the Falcons’ 5-yard line.

Lee, who rushed for 362 yards and four touchdowns in his first start this fall, got the handoff – and the play appeared in trouble for the get-go after a few missed blocking assignments.

“But he made some people miss,” Bush said.

Lee scored — and the game eventually went into overtime.

Kentwood stayed conservative on its drive, setting up Allam’s 36-yard field goal attempt, which he drilled with ease

“I feel we have one of the best kickers in the state,” Bush said.

And now the Conquerors, who started 0-3, are one of the top 16 teams remaining in 4A.

“It’s been a lot of good times, and a lot of times we asked, ‘Where do we go, and how do we get a little bit better?’” Bush said. “But we always stayed with the plan, and continued to develop.”

“He made a hulluva play to the house,” Watson said

A week after the offense was stagnant and predictable loss to Toppenish, the second-year head coach was going to let it fly.

The Leopards (6-3) scored 24 unanswered first half points and beat Connell 24-7 to earn a playoff berth; The Eagles, whose season ends at 4-4, got a 167-yard rushing performance from SCAC East offensive player of the year Carson Riner, were kept out of the endzone until the game was out of reach.

The win came four weeks after starting quarterback and 1A all-state candidate Clay Delp broke his collarbone, forcing Watson to scrap the power spread offense he built around the versatile four-year starter and revert back to his run-heavy ways.

On Friday, he let junior quarterback Jon VanCleave do more than just hand off and run. On the Leopards’ second play, VanCleave took a shot downfield and connected with Jared Nunes for a 52-yard touchdown pass.

“It feels pretty damn good to see these kids fight through adversity and keep it rolling,” Watson said.

Leopards running back Brayden Flood rushed 21 times for 79 yards and a nine-yard touchdown run to go up 21-0 in the second quarter.

Alonzo Vargas’s 43-yard second half field goal that bounced on the upright still went through the uprights and the defense held firm lift East Valley of Spokane to a 10-7 win over Clarkston and nab a berth to state.

Vargas, a 6-1, 280-pound defensive end, gave East Valley what became the winning margin in a three-team tiebreaker for the 2A Greater Spokane League second seed.

Kelso runs past Auburn Riverside on road (3A)

Resiliant, physical Skyview turns up defense in win over Kamiak (4A)