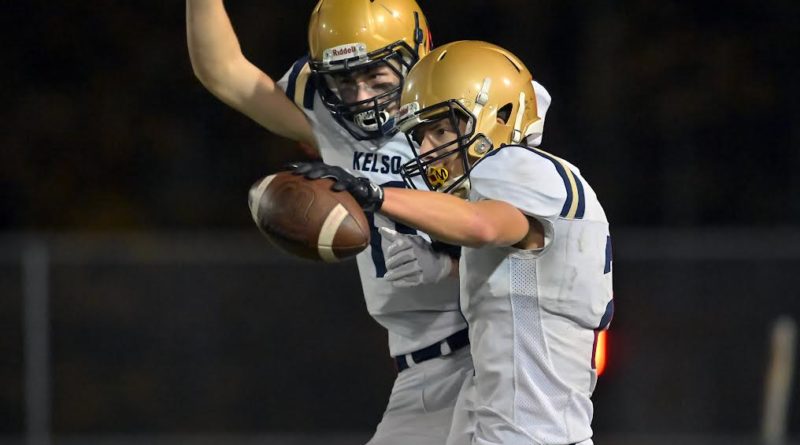 The Hilanders quickly erased the early deficit and ran away for a 41-21 victory in a Class 3A state play-in playoff game at Auburn Memorial Stadium.

Kelso did most of its damage on the ground, though once the running game got rolling, the passing attack followed as a compliment.

The Hilanders (8-2), the No. 2 seed out of the Greater St. Helens League, advance to the state round of 16. They will wait until a Sunday draw at the WIAA offices to find out who their first-round opponent will be.

“It is what it is,” Kelso coach Steve Amrine said. “Our guys were excited to come out and play. They sure proved it. Hopefully we did enough tonight, we come up on the road and beat a league champion, to get us up into an 11 (seed), 10 or 11. We’re a good football team.”

Here are three observations from the Kelso-Auburn Riverside game:

KELSO HAS A DUAL THREAT ON THE GROUND

The Hilanders ran the ball up and down the field, racking up 320 total yards and five of six touchdowns on the ground.

Both Conner Noah and Judah Calixte ran for more than 120 yards and two touchdowns. Noah finished with a game-high 128 yards rushing on 17 carries, while Calixte tallied 123 yards on 14 rushes.

Calixte gained 52 of his yards on Kelso’s second possession, including a 21-yard touchdown that tied the game at 7-7 with 2 minutes, 45 seconds to go in the first quarter. He toted the ball on five of the Hilanders’ seven plays on the drive.

That seemed to jumpstart Kelso, which scored again just over three minutes later when quarterback Hunter Leteer snuck in from 1 yard out to give the Hilanders the lead for good, 14-7, with 11:05 to go in the first half.

“When he (Calixte) makes big plays, it just brings that energy to everybody,” Noah said. “Then, ripple effect.”

THE RAVENS HAD NO ANSWERS

Auburn Riverside went 76 yards on the game’s opening possession, and took a 7-0 lead with 9:18 remaining in the first quarter when quarterback Payton Accetturo found Jace Villers for a  6-yard touchdown pass. But the Ravens (7-1) managed just 68 total yards the rest of the half while Kelso pulled away to a 21-7 lead after two quarters.

“Playoff football, you’ve got to play 48 minutes,” Auburn Riverside coach Greg Herd said. “You can’t give things away for free. You have to take advantage of every opportunity. I think we gave away some opportunities tonight.”

“That’s them taking opportunities from us,” Herd said. “Those hiccups in those games, when you’re playing teams like Kelso, they’ll come back and bite you.”

The Hilanders ran through tackles on several occasions, taking advantage of creases that their runners turned into even bigger plays by not going down. Included was Kelso’s lone passing touchdown – a 42-yarder from Leteer to Zeke Smith with 7:23 to go in the first half.

That play staked Kelso to a 21-7 lead at the half, when Smith wrestled the ball away from Ravens defender Carson Brown at the goal line. The Hilanders never would let Auburn Riverside closer the rest of the night.

“I just kind of ran up there, saw the ball and went up and got it,” said Smith, who also had two of Kelso’s three interceptions of Accetturo.

“It’s playoff football,” Herd said. “Whoever is stronger and tougher, both physically and mentally, and that’s how you win games in the playoffs.”

“The drive that ensued, we started to be really physical,” Amrine said. “Boy, that was really good. Once we did that, then it opened up our passing game.”