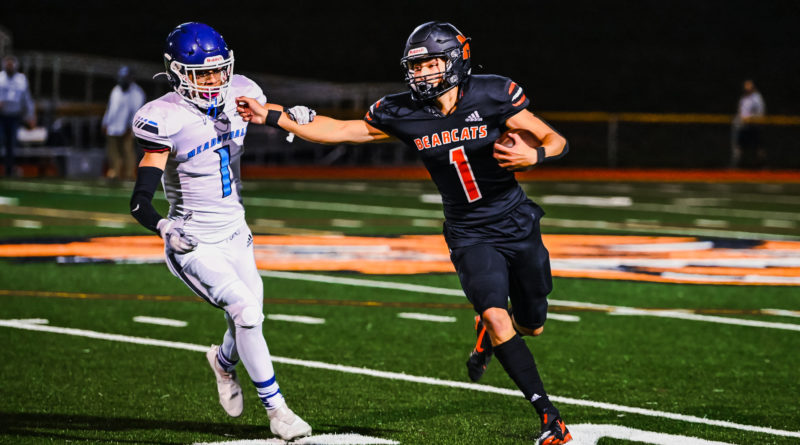 The words were on the tip of Evan Leggett’s tongue, but speaking them felt like an impossible task.

Born with a speech disorder, Leggett didn’t say his first words until he was seven years old.

He grew up wanting to play quarterback, a position that requires a near-mastery of verbal skills. It’s widely regarded as the toughest position in sports, in part because of how crucial it is to communicate clearly in high-pressure situations.

Now a senior at Monroe High School, Leggett is seeing his years of hard work pay off. And little did he know how his perseverance would prepare him for adversity in other parts of his life.

On Saturday, Leggett threw two touchdown passes out of trick plays, including a 48-yard fourth quarter heave to help Monroe (6-3) beat Ferndale, 29-27, to claim its first Wesco title in 30 years. The Bearcats have won four games in a row entering a Round of 32 loser-out matchup at Lakes (6-3) on Saturday at 1 p.m.

Leggett was born with Childhood Apraxia of Speech, a motor speech disorder that interferes with the brain’s communication with the mouth. His twin brother, Ian Leggett, was also born with the disorder. Evan recalls being in preschool and watching peers talk clearly, while no matter how hard he tried, he could only muster a mumble. He communicated mostly by mumbling, pointing and the help of an electronic box that could dictate and enunciate words he wanted to say.

“I had such a good inner-voice, but I just couldn’t speak,” Leggett said.

“It made me very frustrated, but it motivated me so much to accomplish that feeling, you know? I wanted that feeling of (accomplishment). It still is to this day.”

His desire to become a quarterback was fueled in part by a want to be “normal,” he said, along with his natural arm talent, and a desire to lead. He fell in love with the idea while playing catch with his grandfather, Jay Hayes, throughout his childhood. Hayes was a star wide receiver and safety at Everett High School in the 1960s.

When the two would throw the ball back and forth for hours, Evan recalls counting down the days until the start of sixth grade, when he could start playing tackle football.

It took work, and diligent repetition to master the right words.

“I just kept going, because I couldn’t stop it,” he said. “It was very frustrating. But then I got control of it. And it was just muscle memory from there.

That experience has helped him develop into the football player he is today, from offseason training, to weightlifting, to learning a new playbook when he transferred from Snohomish to Monroe for his junior season.

It also helped prepare him to endure and overcome tragedy.

In June, the home the Leggett family was living in burned down, taking with it most of his family’s belongings. Flames consumed the home in a matter of minutes, the fire department told Rachel Leggett, all while the Monroe football team was wrapping up a nearby preseason football practice. Players and coaches could see the fire from the field. They didn’t know it was Evan’s home.

Then, his mom came running onto the field screaming. Evan took off running to be with his family. They lost two pets, but the family was safe.

“In that situation, you can’t freak out,” Evan said.

The cause of the fire has not been determined, according to Rachel Leggett.

In the aftermath, the football team stepped up, and the town’s community helped them put the pieces back together.

The football coaches organized a car wash that raised nearly $6,000. The program’s booster club started a GoFundMe that raised $5,950, helping the family relocate to a hotel. Some 50 Bearcats players showed up, head coach Scott Darrow said, and washed a continuous line of cars for more than six hours. Running backs coach John Little bought Evan new shoes and clothes, to help replace what was lost.

The experience brought Evan closer to his new teammates.

“It’s crazy, because I know if I can’t trust them, the job’s not going to get done,” Evan said. “Through this whole process, I trust them. If they do their job, and I do my job right, it all works out in the end.”

One thing that wasn’t lost in the fire — new football equipment Evan’s mom had recently purchased for him. He took that as a sign, and used football as his outlet in the ensuing days and weeks.

“That’s what we told him,” Rachel Leggett said. “God’s already decided what you’re going to do. Now go do it.”

Darrow noticed an intensified focus in Evan the rest of training camp. He beat out talented up-and-coming sophomore quarterback Blake Springer for the starting job.

The two split time under center throughout the regular season. But as the postseason approached,  Springer continued to shine. In the week leading up to the 3A Wesco championship game against Ferndale, head coach Scott Darrow moved Leggett to receiver to fill in for an injured player — and ended up utilizing his arm talent anyway.

Now, he’s lining up in the same position his grandfather played, in the same county, more than 50 years later.

His dreams of being the team’s full-time quarterback haven’t panned out the way he hoped, but the move has allowed him to spread his athletic wings. In addition to his two touchdown passes on Saturday, he also hauled in a 20-yard touchdown catch and returned a kickoff more than 40 yards.

By all accounts, he has come a long way. By the end of November — around his 18th birthday — he will no longer need to see a speech therapist for the first time in his life.

“We all rally around Evan, because we believe in him so much,” Rachel Leggett said.

Added Darrow: “What he’s overcome is so incredible. He’s such an inspiration to all of us.”