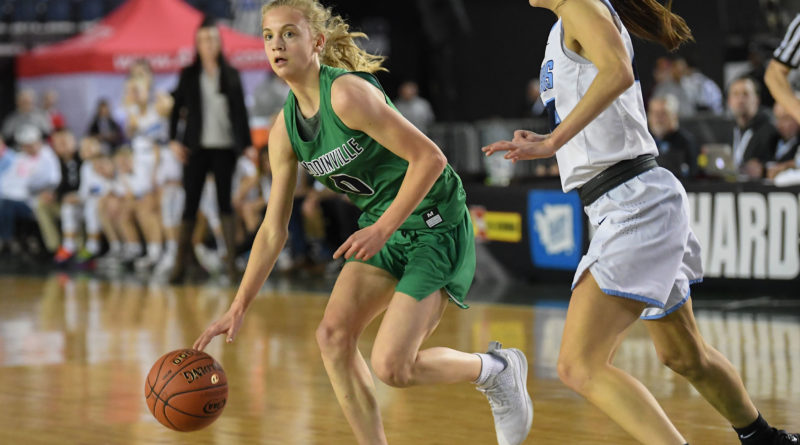 In fact, the do-everything forward for the Falcons’ girls basketball team rose above it – literally.

Thompson grew a few inches (up to 6-foot-1) for the state’s preseason Class 4A favorites, and recently found a dribbling home for college – Boise State University. She gave a verbal commitment to the Broncos in mid-October over American University, Nevada-Reno and Northern Arizona.

“I am super excited,” said Thompson, who averaged 17.2 points, 7.0 rebounds, 4.4 steals and 4.0 assists in five 4A KingCo games last spring as a junior. “They are kind of rebuilding. Four of their starters were freshmen, so by the time I get there, they will be juniors and seniors.”

Even with two-time 4A KingCo player of the year Mia Hughes in tow, Thompson and her high-ceiling athleticism always generated quite a buzz.

She is easily the team’s best jumper, but has the versatility in her game to play on the wing, or handle the ball behind touted point guard Veronica Sheffey.

And the more exposure she got playing with Barbara Berry’s “The Way to Win” AAU gold team, the higher her stock soared.

“It was last year around this time after the AAU season, I started getting a couple of offers,” Thompson said.

This fall, she started visiting the campuses of some of her finalists, including Boise State (with Sheffey).

Accompanying her was a spreadsheet of select criteria, ranging from players’ chemistry, to how practices were conducted – to even if the coaches were yellers or not.

A couple weeks ago, Thompson sat down to literally calculate the spreadsheet’s points system – and the Broncos came out a winner.

“All the schools were super close,” Thompson said. “And it was painful to tell the other three schools I wasn’t going there.”

Now, all she has to focus on is her senior season at Woodinville.

“It feels like a long time since we’ve had (a full season),” she said. “I think we will all have a good run at a state championship.”