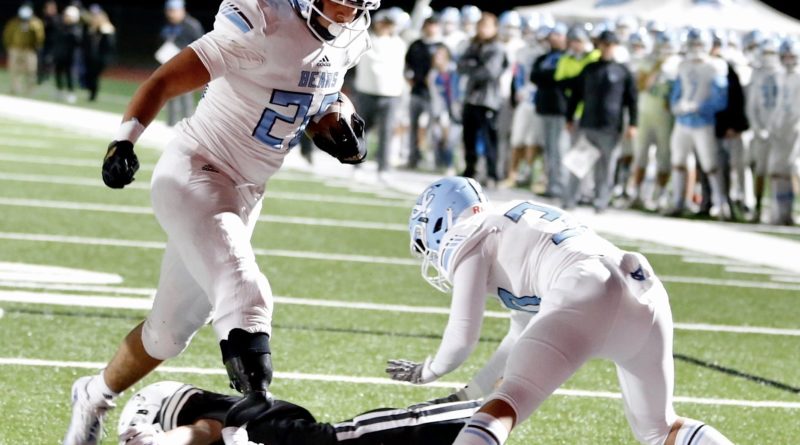 SPOKANE — Lined up in the “Wildcat” formation, Brandon Thomas took a direct snap to the left, followed blockers and stiff-armed his way into the end zone for a touchdown run in Central Valley’s regular season finale win over Ridgeline on Friday.

They were the first points scored in a new district rivalry in Spokane Valley, with neighboring Ridgeline having just opened its doors this school year.

It was also Thomas’ first high school varsity touchdown, and the latest in a growing line of achievements in his return to football this fall following his recovery from osteosarcoma, a type of bone cancer that cost him his lower right leg.

Over the course of the last 18 months, the linebacker, who was a first team all-Greater Spokane League pick (the lone underclassmen selected by coaches) as a sophomore, spent many days wondering if he’d ever have the opportunity to find another end zone, let alone suit up to play football again.

“He’s taking snaps and you’re going, ‘wow, this is incredible,’ ” Devon Thomas, Brandon’s father, said. “It truly is incredible, and he does it all with a smile on his face.”

Lately, there’s been a lot to smile about.

He returned to football in August, shortly after being cleared to play and started in the Bears’ season-opener. His first rushing touchdown came Friday. On Sunday, he stood on the turf at Lumen Field as an NFL honorary captain for the Seattle Seahawks. And on Monday, he received a cancer-free MRI scan on the one-year anniversary since his last chemotherapy treatment.

“Honestly, that’s the biggest change whenever these scans come up every three months,” Brandon said. “It (reminds) me of the bigger things in life, the more important things in life. Helps me have more focus on it.”

Now, as Central Valley prepares to face Richland on the road in a Class 4A District 8 crossover game Friday at 7 p.m. with the season on the line, his family can hardly wait to fill the stands to watch him feature in the middle of the defense — and maybe, elsewhere.

If you look closely during games, you can see him smile through his helmet while he’s playing.

Behind that smile is an understanding of just how far he’s come.

In early 2020, Brandon received his cancer diagnosis after experiencing lower-leg pain during an offseason track workout. Not long after, the world was besieged by a global pandemic. By the time Gov. Jay Inslee issued the state of Washington’s first stay-at-home order, Brandon’s treatment was well underway.

He spent more than 100 days in the pediatric oncology unit at Providence Sacred Heart Children’s Hospital in Spokane. Because of COVID-19 restrictions, only his parents could visit him — not his brother, Josh Thomas, with whom he shares a tight bond.

Luckily, cancer was detected in Brandon before it reached his lungs. According to St. Jude’s Research Hospital, the longterm survival rate for osteosarcoma is 70 to 75 percent if it doesn’t spread to the lungs. It drops to 30 percent if it does.

There were long days and nights in the hospital. His father said Brandon would suffer recurring seizures, which triggered a fear in his son that another could come at any moment.

But he spent even more time in recovery at home.

At a time when his social life was next to nonexistent during his fight with cancer because of risks associated with the coronavirus, friends and coaches would sit outside his bedroom window, drop off snacks and check in with his parents when Brandon wasn’t responding to text messages immediately.

But, for the most part, he was limited to seeing just family while he fought the disease.

During his toughest days, that’s all he needed.

“I still couldn’t really see my friends, which did suck, but I was also very scared and uncomfortable in my own skin at that time,” Brandon said. “What did help a lot was having my family with me, fighting with me.”

He gained around 30 pounds during treatment, and though his weight fluctuated, it was never in his control.

“I was not familiar with my body,” he said.

Then when doctors told him the best chance to prevent the cancer from returning may require amputating his lower right leg, he was confronted with what would be a permanent physical change.

An amputation would give him a chance to play football again — with a prosthetic. Without it, there was a chance he might limp when he walked, and his dreams of playing college football would be over.

Once his amputation was scheduled, friends and teammates organized a drive-by parade at his house. They brought signs, customized shirts and even came with a police escort. It turned out, the love and encouragement was just what he needed.

“It was huge. It changed my mind,” Brandon said. “I was like, ‘Well, if they’re supporting me now, they’ll definitely support me when I have the amputation.'”

He underwent a successful surgery in late May of 2020. For the next five months, he underwent chemotherapy treatments.

And in August, right before Central Valley’s preseason camp, he was cleared to play football.

Each step toward his return to the gridiron — from grueling workouts in his yard with his older brother, who was a former Central Valley standout and Eastern Washington basketball player, to his first practice, then to his first game in September —  has reinforced that.

At school, his prosthetic isn’t noticeable if he’s wearing pants. On the field, it takes a close-up look to see. But Brandon wears it proudly. Now, it’s a part of who he is.

He’s representing all amputees when he’s on the field.

In the Bears’ season opener, Brandon’s first game back, a student manager, who is also an amputee, approached him and told him how inspiring it was to see him perform at such a high level.

“I think about the impact I can make on people, just by (my) work ethic,” Brandon said. “If you’re dedicated enough to something you love, and work on it enough, you can accomplish a ton. I want people to realize my story, and the choices I made to better myself. I want to prove my work ethic and the choice I made didn’t set me back.”

In addition to the added spark he brings to the Bears’ defense — he’s played linebacker and defensive end — he’s resumed his usual vocal leadership in the locker room.

“Seeing him battle back the way he has, never losing his loving smile and laugh he has, never getting down on himself and always staying up has been super inspirational to everyone,” Central Valley quarterback Luke Abshire, Brandon’s longtime close friend, said in September. “That’s our reason to keep fighting … just keep fighting for Brandon.”

On one hand, the memories of his family’s trip to the Seahawks’ game the day before were fresh. Through Footprints of Fight, a Seattle-based nonprofit organization that provides services to families going through pediatric cancer treatment, Brandon was named Seahawks honorary co-captain for their home game against Jacksonville.

Devon, Josh and Melanie — Brandon’s mother — drove to Seattle and watched as Brandon joined the Seahawks’ pregame show, received a signed jersey from linebacker Bobby Wagner (Brandon’s favorite player) and had his name announced and his story told over the stadium’s public-address speakers.

It was a welcome distraction ahead of Monday, the day Brandon was scheduled to go in for his first of three recurring tests, an MRI scan. It was also the one-year mark after his last round of chemotherapy. If his MRI, CT and bone scans came back cancer-free — the latter two are set to take place the following Monday — he goes from needing testing every three months, to every six.

In the past, results with bad news attached tended to come back quicker in the family’s experience, so when word got back right away Monday, there was initial pause.

“It’s nerve-wracking,” Devon, a Senior Associate Athletic Director at Gonzaga University, said. “For the last year, every three months, you’re paralyzed just getting that phone call. And while we didn’t have any indication that anything is wrong, you’re concerned.”

When Melanie called with the news that Brandon’s results were clean, Devon leapt around, high-fiving his co-workers in Gonzaga’s athletic office.

Said Brandon: “The quick turnaround of results scared me, but the news lifted my heart.”

Brandon’s approach to his scans has been the same as everything over the last two years: one step at a time.

It’s the same approach he’s taking to working toward his goal of playing college football — a dream that now has renewed meaning. He has one more year to make that happen. Since his battle with cancer kept him out of classes during much of 2020-21, he’s reclassified to the class of 2023, making him a junior.

Now, as he prepares for his first postseason game in two years, the question now isn’t if Brandon is going to play, rather where.

Can Richland expect to see all 6-foot-2, 230 pounds lined up in the backfield? Or potentially under center?

“I honestly have no clue yet,” Brandon said. “Hopefully.”