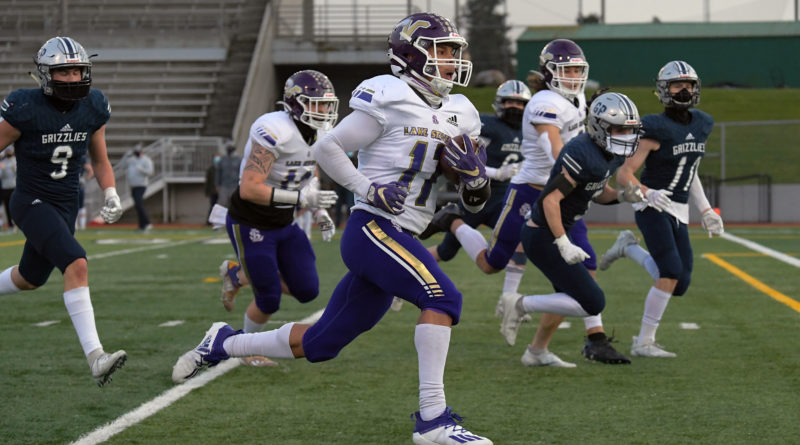 SNOHOMISH – It was far from a snap, but the Lake Stevens High School football team delivered just like it had for so many seasons of its tradition-rich program.

The Vikings, playing without injured starting quarterback Grayson Murren and struggling early in the passing game with sophomore backup Kaden LaPlaunt, managed to collect their ninth consecutive 4A Wesco championship.

That’s because they were ready to alter course when the passing game was iffy, turning to junior star running back Jayden Limar out of the Wildcat formation, taking direct snaps.

The 5-foot-10, 185-pound Limar stirred the Vikings’ offensive success, piling up 203 yards rushing on 27 carries and adding a 50-yard touchdown catch-and-run as second-ranked Lake Stevens brushed off No. 9 Glacier Peak, 34-28, on Friday night in clash that decided the league title at Veterans Memorial Stadium.

“We executed tonight, and I’m very blessed for it,” Limar said. “I give (Kaden) 100 percent props. To throw in a sophomore that’s never played in a varsity game, or got real minutes in a varsity game, it’s hard on anybody. Once I saw how that was going, I was going to kind of have to take over and take the lead.

“I knew we were going to handle it and get our business done.”

The Vikings (7-0 overall, 4-0 WesCo 4A) brushed off early-game offensive struggles and started to thrive on big plays from Limar. That allowed Lake Stevens to post its 50th win in a row against 4A Wesco competition.

All the success wasn’t a surprise, but Limar’s first time taking snaps in a game looked to keep Glacier Peak off balance.

“I definitely felt like I had a lot of control, but if I did one thing wrong I knew it could mess up the whole offense,” Limar said. “I just tried to focus on my assignment and get that done.”

“We faced adversity last week, and I really think that helped us this week,” said longtime Lake Stevens coach Tom Tri, whose team trailed for the first time on Friday since being down 3-0 to 3A power O’Dea in a season-opening 20-3 victory on Sept. 17. “It helped us not really worry about the score and just keep playing and keep doing our job.”

The Vikings were without starting quarterback Murren, who emerged with a fractured leg after playing in all of last Friday’s 35-28 win over Kamiak. LaPlaunt got the start, but threw the first of two interceptions less than four minutes into the showdown with the Grizzlies.

Then, Lake Stevens turned to Limar more out of the Wildcat formation.

“It’s terrible when any player goes down, but Grayson he had to wait until his senior year just to start and to see him go down that was devastating to everybody,” Limar said Murren, who has a hairline fracture.  “We know he’s going to battle back and come back with us in the playoffs, but honestly it didn’t change us much. We just knew we were going to have to keep me in the backfield, because I was most comfortable back there, playing there the last two years.”

The district playoffs loom next week and the Vikings won’t know who they are playing until matchups are drawn on Sunday.

Here are four observations from the Lake Stevens-Glacier Peak game:

VIKINGS SHOULD GIVE THANKS TO HANKS

With Limar stretching the defense his way all night, that freed up speedy and shifty senior wide receiver Trayce Hanks to run free on pass routes and fly sweeps.

In the end, Hanks accounted for three touchdowns, rushing for two and catching another. Perhaps his biggest play came on third-and-9 at the Grizzlies 26-yard line with 8:25 to go in the game and the Vikings clinging to a 26-21 lead.

The 5-foot-9, 175-pound Hanks got loose in the left flat and jetted down the left sideline for a 26-yard touchdown pass delivered by the pressured LaPlaunt, who exited the game after a helmet-to-helmet hit that was penalized on the momentum-swinging toss. Freshman Jayshon Limar, the little brother of Jayden, added a two-point conversion run for a 34-21 cushion.

“That (fly sweep) was working amazing,” Jayden Limar said. “We talked about that play a lot this week, because they have to make a choice.”

When Tri found out that he wouldn’t have Murren at quarterback over the weekend, he knew with LaPlaunt’s lack of experience that he might need an alternative option to trigger the Vikings’ offense.

Even with Jayden Limar on a recruiting visit at the University of Notre Dame, he knew his star running back could potentially have a different role in the offense.

The Wildcat offense, with Limar at the controls, was the focus his star returned from South Bend, Ind.

“We put (the Wildcat formation) in on Sunday night as a staff,” Tri said. “We started to implement it on Monday at practice. We didn’t have Jayden or Jayshon there because they were back at Notre Dame.

“I didn’t anticipate us being in (the Wildcat) near as much as we were tonight. It was just supposed to be a complement package, but it ended up being pretty much our primary offense today.”

Added Tri: “I don’t feel like (Glacier Peak) ever really stopped us, so we stayed in it.”

Jayden Limar’s value grew even more after Friday’s performance as Lake Stevens amassed 414 yards of total offense, including 310 yards rushing. Limar is the seventh-ranked running back nationally in the Class of 2023, according to 247Sports.

“He’s our rock on offense,” Tri said. “We’re going to keep riding him for as long as we can.”

VIKINGS COULD BE DOWN TO THIRD-STRING QUARTERBACK IN PLAYOFFS

With LaPlaunt going down with a possible head injury late in Friday’s win, and with Murren out indefinitely with a leg fracture, Lake Stevens could be down to its third-team quarterback or full-time focus on the Wildcat formation when the playoffs start next week.

“We’re down to our third-string quarterback with Kaden getting hurt tonight,” Tri said. “We’ll start all over again on Monday and start putting all the piece together and start figuring out what we can do.”

It might be a lot of running, especially out of the Wildcat.

“(Glacier Peak) knew it was run, we knew it was run, and yet we still ran the ball between the tackles and moved the chains and scored when we needed to,” Tri said. “We’ve got to give credit to our O-line.”

PEAKING AHEAD FOR GRIZZLIES?

Even though Lake Stevens emerged with it’s sixth consecutive victory over Glacier Peak and hiked its all-time series lead to 7-3, the Grizzlies gleaned plenty of confidence from hanging with the reigning 4A Wesco winners.

“We had our chances, but we just didn’t take advantage when they were right there for us,” said Glacier Peak coach Shane Keck, whose team took over with 4:14 remaining in the game but went backward on seven plays and then punted. “We feel, if that’s the No. 2 ranked team in the state and realistically we had a chance to win right there, then I think we’re as good as anybody. We’ve got dynamic guys and we can move the ball.

“I really feel like we’ve got a chance to go make some noise and make a run (in the state playoffs).”

For now, the Grizzlies will have to play second fiddle to Lake Stevens.

“It’s kind of our reputation to win Wesco every year, and that’s because of our great coaching,” Jayden Limar said.