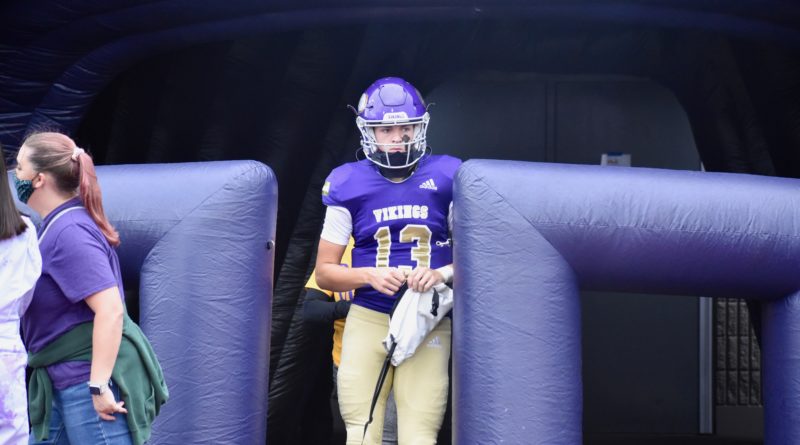 TACOMA – Ryan Cramer rushed for 120 yards and three touchdowns, Jordan Dwyer added eight catches for 158 yards and another two scores as the Puyallup Vikings completed their regular season with a 42-7 victory over host Bellarmine Prep on Saturday night.

Both teams, along with 20 other west-side Class 4A participants, will find out on Sunday who they will play, what day and game times. A seeding committee will determine the 11 matchups for the games affecting Districts 1-4.

“It’s been a little strange,” Lions coach Brian Jensen said. “We do know that we have a playoff game next week. And we’ll be at home, we’ve been told that much.”

Through 2019, a scheduling formula determined Week 10 matchups. The switch to a seeding committee only happened this fall.

When the Vikings began practicing in August, Cramer wasn’t a part of the mix. The junior initially had determined not to return to the football field after last spring’s COVID-19 truncated sophomore  campaign.

“I thought I’d focus on some other sports, and academics,” Cramer said. “But I talked to the coaches, and some other people. I decided late to come back. I’m glad I did. I love this team.”

Cramer was the workhorse against Bellarmine Prep, rushing 17 times for 120 yards. He scored three of the four Puyallup running touchdowns.

Ziere Ford had a nice night himself running the ball, adding 54 more yards on nine carries.

“Our line is just great,” Cramer said. “They really got their assignments in. I gotta buy them some donuts or something next week.”

The pair of tailbacks gives Puyallup a hard-hitting 1-2 punch in the running game.

“Running the football certainly is part of what we want to do,” Puyallup coach Brian Grout said.

DWYER IS A THREAT

Of his 158 receiving yards, 76 of those came on a single play for Dwyer. Quarterback Micah Balzarini feathered a ball to the right sideline and Dwyer tapped it to himself before turning the corner.

Dwyer then stepped out of one tackle along the sideline and out ran two more Bellarmine Prep defenders to score the go-ahead touchdown with 2 minutes, 47 seconds to play in the first quarter. The catch gave Puyallup a 14-7 lead and started the deluge of first-half points.

Puyallup actually trailed this one, 7-0, after a shanked punt led to an 18-yard punt return for a touchdown from Lions running back and returner Gage Hicks with 8:47 to go in the first quarter.

On the ensuing possession, Puyallup went 80 yards (and put up 94 yards of offense after a 14-yard holding call early in the drive pushed the Vikings back to their own 6) in 10 plays, tying the game at 7-7 on Cramer’s first touchdown run from two yards away.

The Vikings went on to outgain Bellarmine Prep, 321-106, in total offense during the first half, scored four more times and took a 35-7 lead by the half.

“We felt like we had some answers for what they wanted to do,” Grout said. “Our defensive unit has been playing really well.”