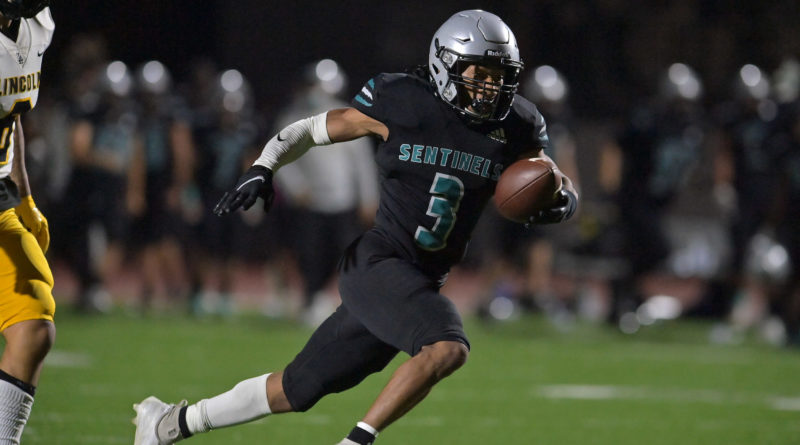 SPANAWAY – Ninth-ranked Spanaway Lake capitalized on the fourth turnover of the game from visiting Lakes, and erased a late third-quarter deficit to earn a 32-21 victory in a 3A Pierce County League regular-season finale Friday night at Art Crate Field.

The victory catapulted the Sentinels into the No. 2 spot in the PCL heading into next weekend’s preliminary state playoff round. Lakes will get the third and final league playoff berth to the round of 32.

The Lancers took a 21-20 lead on the second scoring connection between quarterback Justin Brennan and Leo Pulalasi with 3 minutes, 2 seconds remaining in the third quarter. The play went for 60 yards and came on a third-and-18 situation from the Lakes’ 40-yard line.

Lakes stopped the Sentinels on their ensuing possession, but three plays later, fumbled the ball away at the Spanaway Lake 33. Lakes then looked to have put the Sentinels into a third-and-long situation, but got called for an unsportsmanlike conduct penalty that gave Spanaway Lake new life, and a first down inside Lancers’ territory.

Three plays later, D’Aryhian Clemons burst up the middle for 12 yards and the go-ahead score, 26-21, with 10:45 remaining in the game.

Here are four observations from the Spanaway Lake-Lakes game:

RUN FOR THE MONEY

The ground game served Spanaway Lake well all evening. Most of the damage done came from sophomore back Josh Collie.

It was Collie who broke several tackles on a game-clinching 87-yard touchdown run with 8:42 to go to extend the Sentinels lead to two possessions, 32-21. That run put the cap on Collie’s 226-yard, three-touchdown night – all on just 18 total carries.

Collie, who got injured as a ninth grader and missed most of the shortened spring campaign last school year, was playing in just his fifth overall game.

“I told him this was his coming-out party,” Spanaway Lake coach Cameron Robak said. “People would know about him after this game. We’ve been waiting to let him loose. He’s had a couple of games, been beat up a little bit. But I knew tonight he was going to go wild.”

SENTINELS CAN GET DEFENSIVE

Staked to the two-score lead, the Spanaway Lake defense took things over down the stretch. After Lakes gave up the lead, the Lancers had three more possessions in the game.

Lakes amassed all of six yards of total offense in those final three tries with the ball. And Brennan was sacked three times on the last two possessions.

“We had to just tell our guys, ‘Beat them on the scoreboard,'” Robak said. “It doesn’t matter what they say, what they do. We’ve just got to believe.”

The Sentinels came from behind twice Friday. Lakes scored first with 2:04 remaining in the first quarter on the first Brennan-to-Pulalasi strike from 30 yards out. Spanaway Lake scored the game’s next two touchdowns before the teams settled for a 14-14 tie at the half.

The Sentinels scored first in the third quarter on Collie’s second touchdown from 4 yards out, but missed the PAT kick for a 20-14 lead. The 60-yarder from Brennan to Pulalasi put Lakes in front for the second time.

The Lancers, however, took it another step on Friday. Of their 13 penalties for 105 yards, seven were false starts that pushed their offense behind the sticks.

On top of the penalties, there also were the four turnovers. Brennan threw two interceptions and the Lancers lost two fumbles. The last lost fumble directly led to Spanaway Lake’s go-ahead touchdown early in the fourth quarter.

Lakes did manage to do a few good things, especially with its back against the wall early on. Each of the Lancers’ first two touchdowns came on fourth-down plays.

The first Brennan to Pulalasi strike went for 30 yards on a fourth-and-7 call. Brennan then got the game tied at 14-14 with 3:46 to go in the first half when he hit David Wells Jr. on an inside slant that went for a 26-yard touchdown on a fourth-and-4 play.

Even the third Brennan touchdown pass came late, again to Pulalasi, on third and 18.