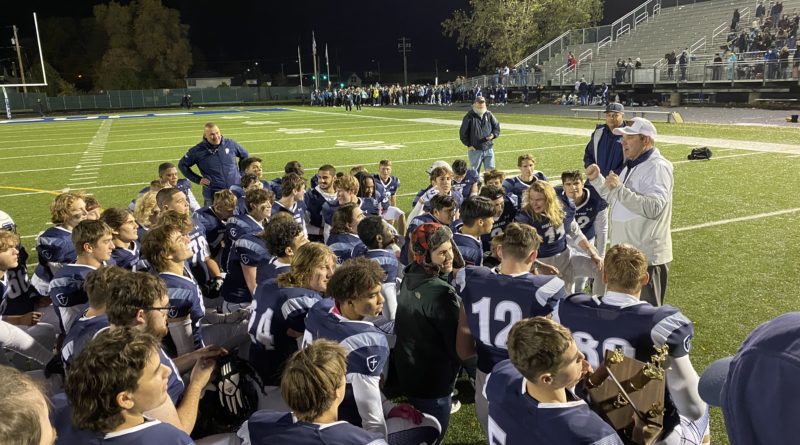 SPOKANE, Wash. — Gonzaga Prep already knew its fate. A Week 10 crossover game against Chiawana was in the books before kickoff.

So, the third-ranked Bullpups’ 28-20 victory over the Mt. Spokane Wildcats was the cherry on top of an undefeated regular season.

For Gonzaga Prep, they end the season undefeated at 8-0 and claim the de facto 4A/3A Greater Spokane League title. The Bullpups earned the No. 1 seed in the league and will take on Chiawana with a berth to the state round of 16 on the line.

Mt. Spokane finishes the regular season 6-2 and nabs the GSL 3A top seed heading into Week 10. Unlike the other three classifications, those matchups will be determined by a ranking committee on Sunday.

Here are four observations from the Gonzaga Prep-Mt. Spokane game:

McKenna’s legs carried the Bullpups. His arm sealed the deal

To the surprise of no one, Ryan McKenna’s legs proved to be the difference maker in the de-facto 4A/3A GSL title game.

Coming off a season-high 224 yards on the ground with five touchdowns, the senior was looking to replicate that performance were his Bullpups to remain undefeated. Safe to say he answered the call. McKenna rushed for 164 yards and three touchdowns on 31 carries.

After fumbling on the opening possession of the ballgame, it didn’t take McKenna long to shake off his mistake. Up 7-0, McKenna extended the lead after bursting up the middle, shaking off would-be tacklers, and sprinting 65 yards to the end zone.

After getting the ball back on downs following a muffed punt from the Wildcats, McKenna iced the game. He hit senior Dylan O’Keefe from 24 yards out, putting the game out of reach at 28-13. It was just his second pass attempt of the night.

There are three phases of the game, and Mt. Spokane made the most of its opportunities on special teams.

Mt. Spokane, the No. 7 team in 3A, needed momentum following McKenna’s 65-yard scamper to make it a two-touchdown game, and had two punts and a costly interception by Kellen Flanigan on third and 16 to Junus McGraw II to show for the previous three drives.

But on the ensuing kickoff, the Wildcats found life. Speedster Blake Speer fielded the kick and tip-toed his way down the Bullpups’ sideline to the 1-yard line. It took three more plays for Speer to find the end zone, which came in the form of laser from Flanigan on third and goal.

With the score 14-7 in the second quarter, the Wildcats turned to a little trickery.

“We have a good kicker, a Division I guy, so he can put it in a spot,” Mt. Spokane coach Terry Cloer said. “We put our two fast guys on that side and they went and caught it.”

Just before half, Moczulski cut the deficit to four with a 44-yard field goal.

Coming out of halftime, the Wildcats appeared to have found a solve for the Bullpups’ defense looks by taking to the air.

On second and five from his own 31-yard line, Flanigan found his favorite target, senior Jordan Sands, for a 14-yard gain over the middle. Two plays later, the duo connected again, this time for a 29-yard pass down to Gonzaga Prep’s 1-yard line.

The Bullpups defense bent, but they didn’t break.

A jet sweep on first and goal was blown up as Aiden Prado was tracked down on the sideline before he could turn the corner. Two quarterback keepers from Flanigan were stuffed, and in a blink of an eye, it was fourth down.

Moczulski hit a 22-yard field goal to make it a 14-13 game, but the thought of what could’ve been loomed large on the Mt. Spokane sideline.

A late touchdown from Speer proved to be too little too late.

Game decided in the trenches

The GSL 4A/3A title game was headlined by both team’s interior defensive lines. For Gonzaga Prep, it boasted a 1-2 combo in Kaz Melzer off the edge and Ephraim Watkins up the middle.

The duo had a combined 11 sacks on the season heading into Friday’s game.

And on Friday, stopping the run became the number one priority. The Wildcats were limited to 34 rushing yards on 16 attempts from five different players. Flanigan alone was limited to 1 yard on the ground on four carries.

While the Bullpups’ defensive line held its ground, the offensive line dictated the line of scrimmage. The combo of Lilo Mikalcle and Matteo Saccomanno racked up 111 rushing yards combined, averaging just over 4 yards a pop out of the backfield. As a team, the Bullpups rushed for 290 yards, with all three touchdowns coming way of McKenna.