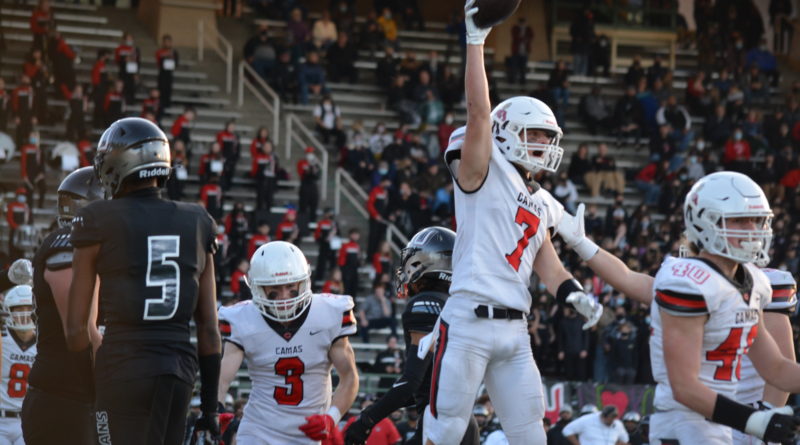 When the Camas linebacker trounced into the backfield and crunched Union quarterback Mitch Ratigan in his own end zone for a safety with 4:16 left in the third quarter, Phillips sensed the Papermakers’ grip tightening, with each celebratory flex of his muscles.

“I could feel it as soon as I was making the hit,” Phillips said.

Camas, which started the season 0-4, beat Union 17-7 on Friday night at McKenzie Stadium to win the 4A Greater St. Helens League title outright, secure the first of two league postseason berths and eliminate the chance of a modified Kansas City tiebreaker on Monday.

Ultimately, the win, Camas’ fifth in a row, validated the team’s belief that being battle-tested matters this time of year.

The Papermakers (5-4, 3-0) were led by a defense and special teams units that forced three first half turnovers — two interceptions and a forced fumble — capped by Phillips’ safety.

“We’ve leaned on our defense quite a bit this year,” Camas interim coach Jack Hathaway said. “They’ve kept us in every game. That’s a dangerous side of the ball.”

Offensively, they controlled the game on the ground. Senior running back Jon Schultz rushed for more than 160 yards for the second consecutive week.

Union took a 7-3 lead when Jaydon Jones punched in a one-yard run with 7:41 left in the second quarter.

Minutes later, Camas pulled within one with a 26-yard field goal by Ethan Ouchi, then a Mark Thorkelson interception set up a 15-yard touchdown pass — Taylor Ioane to Sam Stark — to put Camas up 12-7 in the final seconds of the first half.

Thorkelson finished with two defensive takeaways. He also recovered a fumble in the first quarter.

Considering an offseason that graduated most of its line, a star quarterback to the Pac-12 and its future hall of fame coach Jon Eagle to the FCS college ranks, Camas could have wilted against a nonleague schedule that included teams ranked No. 1, No. 2, No. 5 and No. 6 in SBLive Oregon’s Class 6A rankings.

While Camas was playing Friday night, two of those opponents — Central Catholic and Clackamas — were playing a nationally televised game on ESPNU on the other side of the Willamette River.

Instead, the Papermakers leaned into it.

“Our schedule, yeah we’re 5-4, but we’re peaking right now, and I think that’s important,”  Hathaway said. “The mission was to win one game at a time and once we got rolling, and here we are.”

The Papermakers’ Week 10 opponent will be set on Sunday when a committee of athletic directors and coaches rank the 22 teams that nab postseason berths from the west side of the state — Districts one through four — and determine matchups from there.