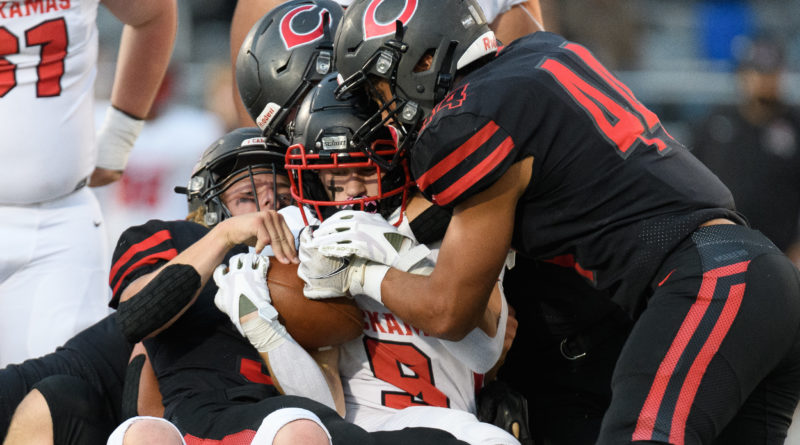 Some of the biggest leagues in the state – the 4A Wesco, the 4A KingCo Conference, the 4A Greater St. Helens League and the 4A/3A Greater Spokane League – are coming down to the final week of the regular season to crown their champions in exciting head-to-head matchups.

Plus, Moses Lake also has an opportunity to clinch the 4A CBBN title outright with a home victory over West Valley of Yakima.

Here is a quick recap of last week’s highlights, and a look forward to Week 9 storylines and games to follow:

THREE THINGS WORTH REVISITING FROM WEEK 8

Over the years, 4A Wesco powerhouse Lake Stevens has made a habit of steamrolling league opponents. So, when the No. 2 Vikings had to survive against Kamiak, 35-28, last Friday, was a weakness or two exposed? “We have to fix them quickly,” Vikings coach Tom Tri said. “We made some mistakes – blown coverages – that they (Kamiak) took advantage of.” More bad news – the Vikings will go into this week’s showdown against No. 9 Glacier Peak without QB Grayson Murren (leg).

Once a quarterback, Kamiakin standout doing everything

At some point, Payton Graham just wanted to be a quarterback (like his father, ex-DeSales standout Pat Graham). But Kamiakin has diversified his role by lining him up at tailback, receiver and even quarterback. Last week against Hanford, he accounted for touchdowns receiving, passing, rushing and special-teams returning. “It’s a big key in our offense because … we can line up in so many different formations and sets, and not have to (substitute),” the Gonzaga baseball commit said.

It was a brutal start for Camas, which lost all four non-league games against Oregon powerhouses. But now, the Papermakers are on a four-game winning streak after a 17-7 win over Skyview last Friday, and now have a chance to clinch another outright 4A GSHL title against Union. “Going 0-4 … doesn’t matter,” Camas interim coach Jack Hathaway said. “In the end, it’s all about our league and winning those games. … Figuring out who we are helped us (in a win over Skyview).”

4A CBBN race coming to a frantic close

With four schools still in the 4A CBBN title hunt, West Valley of Yakima coach Dan Eyman used one word to describe the league chaos. “Parity,” he said. If Moses Lake and first-year coach Brett Jay can defeat the Rams on Friday, the Chiefs will win their first league title since 2017. A Rams’ victory puts them tied for first place in search of their first league crown in the 4A ranks. “You play as Pee Wee, junior high, high school and college players to play in meaningful games,” Eyman said.

No team has had more stop-and-start weeks to their season than No. 9 Spanaway Lake (3-1). And after being off last week because of a COVID-19 cancellation (Stadium), the Sentinels now must get it together to face Lakes for the No. 2 spot in the 3A PCL. They spent the off week engaged in various team competitions to keep an edge. “We will have played more games last spring than we will now,” Sentinels coach Cameron Robak said. “It is hard to keep the kids motivated.”

Rematch on tap for 3A Wesco championship

Monroe pulled out a 42-40 overtime thriller over Snohomish to capture the 3A Wesco South title, and will have a rematch with North champion Ferndale for the league championship Friday. The Golden Eagles beat the Bearcats, 55-35, to kick off the season. If Monroe wins, it would be its first 3A league title since 1991. “Week 1, it was hard to simulate the Wing-T of Ferndale,” Bearcats coach Scott Darrow said. “But at this point, we have guys who are a little more coached-up.”

Skinny: Since Wolves captured last 4A KingCo crown in 2001, Bothell has won it seven times. Cougars’ front seven might have hard time getting stops this time around.

Skinny: Mount Spokane’s ability to attack edge – and deep – gives league’s top 3A team a chance. Bullpups have won five of the past six meetings, and QB Ryan McKenna on mission.