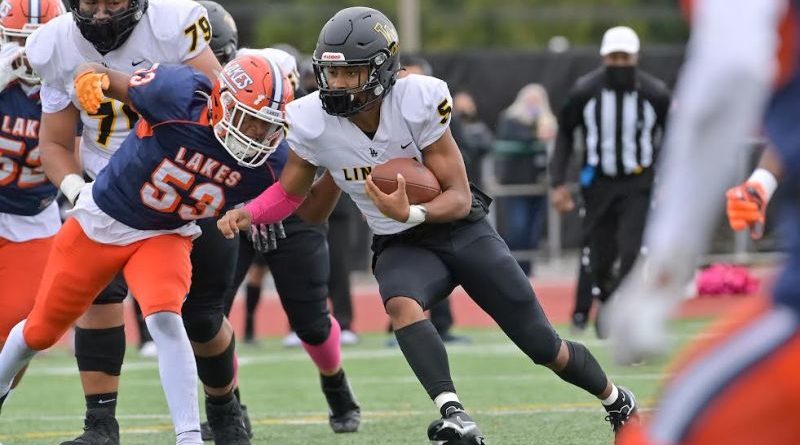 From a game-saving defense stand, to an impressive one-handed touchdown catch, SBLive narrowed down 10 standout highlights from Week 8 of the high school football season across the state of Washington.

Now you can decide which one rises above the back. Cast your vote below. Voting ends on Friday at 9 a.m. and the winner will be announced shortly thereafter.

Here’s a breakdown of the top plays

• Gabarri Johnson, Lincoln (Tacoma) (3A): Yes, it was called back for a flag, but marvel at the standout dual-threat QB’s playmaking ability in this long would-be touchdown run.

• Kennedy McGill, North Creek (4A): Exploded for an 80-yard touchdown run in a 38-21 win over Skyline, setting a new school record for longest touchdown run.

• Avery Ellis, Royal (1A): Linebacker jumped a screen pass with perfect timing and jogged in for a pick-six in Royal’s 56-6 win over Ephrata.

• Trayce Hanks, Lake Stevens (4A): Continues to flex playmaking abilities, here with his 95-yard kick return for touchdown in a 35-28 win over Kamiak.

• Payton Graham, Kamiakin (4A): Watch two of Graham’s four touchdowns scored in all different ways in a win over Hanford — a long reception, a punt return, a pass and a run.

• Monroe defense (3A): After forcing overtime, the Bearcats stuffed Snohomish on a two-point conversion attempt to secure a thrilling win and a share of the 3A Wesco South title.

• Wyatt Redding, Sumner (4A): Is that the kicker? Sumner’s standout leg, one of the state’s top kickers, shows he’s more than just that, catching a 42-yard touchdown pass in a 35-7 win over Bellarmine Prep.

• Levi Giles, La Center (1A): Hauled in diving catch on a long pass in a big win over Seton Catholic.