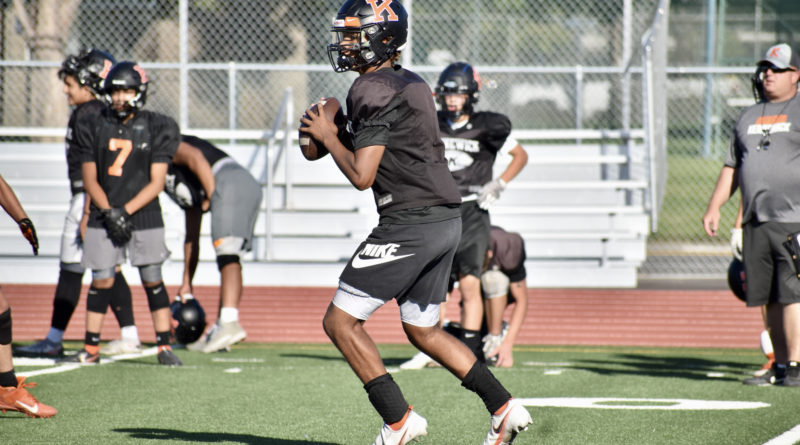 PASCO – Kennewick High School senior Myles Mayovsky hopefully gets to sleep in on Saturday morning after he led his visiting third-ranked Lions over Chiawana, 27-10, at Edgar Brown Stadium on Friday night.

The workhorse running back had 31 touches, rushing for 140 yards on 29 carries (scoring on two 11-yard touchdown runs), and catching two passes for another 77 yards.

As a linebacker, Mayovsky led the Lions defense too, collecting six tackles and a pressure on Chiawana quarterback JP Zamora.

Even though winning the Mid-Columbia Conference contest over the defending league champions was important to Mayovsky and the Lions (6-1 MCC play, 7-1 overall), it doesn’t change their playoff status. They’ll still be the top Class 3A seed out of the MCC.

“t’s already playoff season for us,” Mayovsky said. “(Beating Chiawana on Friday and Richland next week) is 100 percent the key for us. We need to win these two games. We got Chiawana tonight. Hopefully, we can do that against Richland.”

Two weeks after losing 34-20 to Kamiakin — “that was like a flick to our nose,” said Mayovsky — the Lions have worked their way back into a team to be reckoned with.

“We want to turn things up,” said Mayovsky. “Coach Aff (Randy Affholter) has been hard on us since that loss.”

Affholter said he has a purpose.

READ: Behind a breakout season at Kennewick, a father-son bond forged through hardship

“We’re just trying to get the kids prepared and focused for the games,” Affholter said. “We talked about this type of team (Chiawana) is the kind of team we’ll play in the tournament.”

Class 3A will have a 32-team regional bracket statewide, said Affholter, in Week 10, and the WIAA’s Ratings Percentage Index will play a part in the pairings.

To beat Chiawana on Friday, Affholter said he wanted the Lions to establish the run. That they did with what Mayovsky accomplished.

Zamora got the Riverhawks (4-3, 4-4) on the board first by marching Chiawana 79 yards on seven plays, culminating in a 4-yard touchdown pass to Darion Johnson.

But the Lions answered in their first series, going 65 yards in 10 plays and Mayovsky scoring his first 11-yard TD run — knotting the game at 7-7.

Chiawana re-took the lead on the next series, as Michael Kot kicked a 37-yard field goal.

It wasn’t until there was 1:31 remaining in the first half that Kennewick took the lead for good, when Lions quarterback Dayton Davis connected with Erick Mora on a 6-yard touchdown pass and a 14-10 halftime lead.

Davis would finish with 176 yards passing with two scoring strikes.

“Dayton has really stepped it up this year,” said an admiring Mayovsky. “All of his hard work this past summer is basically paying off.”

In the second half, Kennewick opened the third quarter with a 15-play, 83-yard scoring drive. Davis connected with Simeon Howard on a 22-yard touchdown pass and a 21-10 lead.

Howard also had a good game. The senior caught five passes for 79 yards, had a fake punt that gained 24 yards, added two tackles (one for loss), a pass breakup, and an interception.

Zamora was harassed enough that he finished 9-for-20 for 95 yards. He did add 61 yards rushing. But he was forced to run as Kennewick’s secondary and linebacking corps did a good job of blanketing Riverhawks’ receivers.

Perhaps the Lions’ best defensive effort came with its offense. That long third-quarter scoring drive chewed up 8:13 of time out of the gate.

That didn’t give Zamora — who has committed as a preferred walk-on to UCLA — much time to do anything.

“Our defense did a great job,” Chiawana coach Scott Bond said. “But how many times did they have third-and-long and we gave it up?”

Eight times, to be exact — and a fourth-and-long situation to boot.

Linebacker Luke Leavitt led the Riverhawks with seven tackles (one for loss) and a quarterback sack, while teammate Lane Hedrick, a defensive lineman, added six tackles.

Chiawana is pretty much locked into the No. 3 seed for Class 4A regionals, and will likely play at Gonzaga Prep in a few weeks.

“This game has been the epitome of our year,” Bond said. “We struggle to do the little things, so when we can do the big things, we cant get them done. Still, we’ve got a chance in the playoffs.”