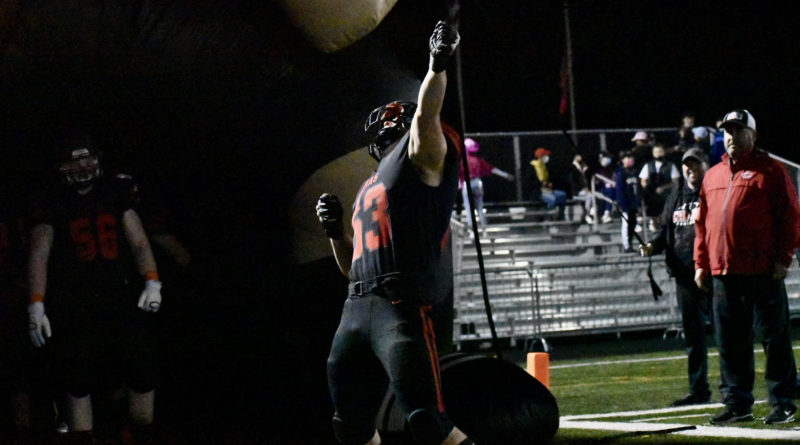 CAMAS, Wash. — As the seconds ticked down on the scoreboard, Taylor Ioane cased the Camas sideline and took a long look at the raucous student section, clad head to toe in pink for breast cancer awareness.

The junior quarterback was experiencing his first taste of a signature win, and he didn’t want to waste a second.

Who can blame him? On Friday night, the Papermakers (4-4) went from prey to predator, riding suffocating defense and a consistent run game and a clock-eating offense to a 17-7 win over No. 10 Skyview (6-2).

The win for Camas, which started the season 0-4 against Oregon state powers, marks 11 straight over the neighboring program, and denies the Storm their shot at a first outright league title since 2011.

“I’m excited,” Camas linebacker Jairus Phillips said. “I don’t even know what to say. That was big. There was a few things they said online, whatever, we disregarded it and spoke what we needed to say on the field and obviously it showed tonight.”

Skyview’s fourth quarter comeback attempts were dampened by a missed 29-yard field goal and an offense stymied out of its more regularly fluid movement.

The still-reigning 4A state champions lost their first four games of the season. They’ve won four straight. And now, improbably, they’re one win away from claiming the 4A GSHL title outright.

An über-conservative offense paid off for Hathaway, Camas

If you came expecting two offenses operating at high-octane — like when the two teams played in the spring — Friday night was a sore bummer.

Instead, the Papermakers moved the ball methodically.

And their defense forced Skyview into a lot of punts — and several key turnovers.

The Storm opened the third quarter with a long, clock-munching that ended with Gabe Martin punching in a 1-yard run to pull even at 7-7. Ethan Ouchi converted a 32-yard field goal to put the Papermakers up 10-7 at the end of the third.

Camas drove the ball into Storm territory, then Skyview’s Jalen Salavea came up with a strip sack to give the Storm the ball on its own 11. The next play, Papermakers junior Zach Blair picked off Niko Arriola, and Ioane hit Natha Criddle on a 12-yard pass to go up 17-7 with 8:40 left.

The time of possession wasn’t tracked, at least publicly. But the Papermakers looked like run game wizards. What better way to keep an opposing offense at bay than to keep them off the field?

Those lessons, Hathaway thinks, were learned — and earned — by opening with four-consecutive Oregon state big-school contenders.

“It’s a couple plays here and there,” Hathaway said. “We could have been victorious in some of those games and that prepared us for the future, here tonight.”

The 4A Greater St. Helens League crown must go through Camas

The last time Skyview won a league championship outright (the three-way tie in the spring doesn’t count) was in 2011.

All that to say, as the Papermakers rose to a state 4A power under coach Jon Eagle, if you beat them, chances are you’ll win a league title.

“In the end, it’s all about our league and winning those games,” Hathaway, who should highlight the team’s last two results when he applies to become the full-time head coach at season’s end, said. “And those games, we had to go through and endure, and some battling, figuring out who we are helped us tonight. I 100 percent believe that.”

Camas took a page out of Skyview’s book

Skyview entered the game with one of the state’s more formidable one-two backfield punches in Jaydin Knapp and Martin, and an O-line plenty capable of paving their way.

They ran into a defense that hits hard — and refused to allow the Storm any leeway up the middle.

“We might not be the biggest, probably not the fastest, but we will play harder than you,” Hathaway said.

The Papermakers welcomed back senior defensive back Conner Murphy, Philips and receiver/defensive back Blair — three standouts who didn’t play at Tumwater in Week 7 due to injury.

They did what Skyview has done well when at its best, controlling the game on the ground and frustrating opposing offenses with the size and discipline of its front seven.

Senior running back Jon Schultz logged 30 carries for 160 yards, including a 50-yard scamper down the right sideline that helped set up the Papermaker’s final touchdown.

And a red zone stand to force Skyview into 4th and 14, setting up a field goal attempt (and miss).

“Our defense worked well as a whole,” Phillips said. “We worked together, did everything a good defense needs to do. It’s more of a family than a defense to me.

At the end of the day, good defense comes down to discipline. An understanding of teammates’ tendencies doesn’t hurt either, which doesn’t hurt the Storm, since the linebacking corps has played together since elementary school.

Said Jamison: “Everyone read their lines, filled their holes and no one else tried to do anything more. That would have allowed big plays.”

Storm have chance to rebound

Cutting through a musty room filled with disappointment were the Storm’s seniors. Martin, Knapp, Division I prospect Tanner Beaman, receiver Teddy Beaver and some of the other elder statesmen stood up and addressed the team in the postgame.

“I feel like this opened our eyes to how good the state can be, even though we didn’t think the were as good as they were,” Evans said.

The two could face off again in the tiebreaker, which looks like a round robin college overtime challenge.

Bring it on, say the Storm.

“Yeah I want to play them again,” Evans said. “I want to show these people what Skvyiew football is about.”

But Storm players gave plenty of bulletin board material to the home team in the days leading up to the game, Camas players say.

“They were talking a lot, which was really surprising for us, like why do you guys think we’re gonna get destroyed?” Jamison said. “We came out here, did what we knew we were going to do and they can’t talk (smack) anymore.”

“Keep our heads up,” Evans relayed his coach telling the team, “and let’s go show the state what we’re about. We’ve got to wake up and go do us, be a family again.”

The Papermakers just made the race for the 4A Greater St. Helens League title and one of the league’s two berths that much more interesting.

They also raised the odds of a modified Kansas City-style tiebreaker after Week 9, if it ends in a three-way tie for two berths.

By denying Skyview a chance to claim the league title outright, Camas claims at least a share with a chance to win it all with at Union next week.

And that leaves a four-team league with three 4A state playoff regulars and owners of three of the past four 4A state titles fighting over two postseason bids.

If Union, who beat Wenatchee 41-20 Friday night, edges Camas in Week 9, the Titans (6-2) force a tiebreaker after Week 9. The Storm are done with league play and will host Nelson of Oregon in Week 9.