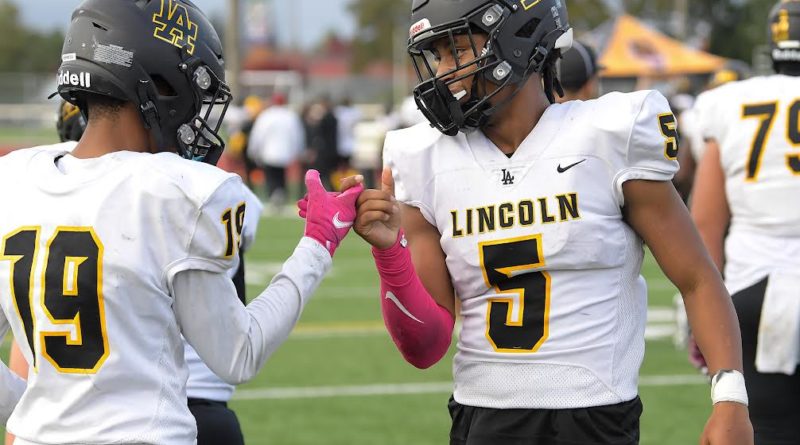 LAKEWOOD – Once again, the eighth-ranked Lincoln of Tacoma Abes are back on top of the 3A Pierce County League.

Led by the dual-threat contributions of quarterback Gabarri Johnson, the Abes held off undermanned Lakes, 36-34, at Harry E. Lang Stadium on Saturday afternoon.

With the victory, Lincoln won its first league title since 2019 – and will be the No. 1 seed in the postseason.

And nearly blowing a two-touchdown lead in the second half, the Abes did not put it away until Johnson’s 6-yard run on third and 5 with two minutes remaining.

Lakes came into the game missing eight starters after a mid-week COVID-19 outbreak, including four starters along the offensive line. That is usually a problem when you are facing one of the biggest and most active defensive fronts in the state, led by top 2023 recruit Jayden Wayne.

“We thought we could have a little more success up front, but they brought their best,” Lincoln coach Masaki Matsumoto said. “They caused us some problems.”

Here are four observations from the Lincoln-Lakes game:

NOT SURPRISINGLY, GABARRI JOHNSON WAS THE DIFFERENCE

Matsumoto had an idea this could be a special week for his Abes after what he saw during one conditioning session.

It was actually a game of ultimate football, and Johnson made one highlight-reel move after another.

“He is a special kid,” Matsumoto said.

For three-plus quarters, most of Johnson’s impact plays came off scrambles and read-option runs. He finished with 187 rushing yards on 31 carries, scoring four touchdowns.

“He is just so hard to tackle,” Lakes coach Dave Miller said. “He’s not the fastest guy in the world, but he’s super shifty and super quick, and he made a lot of guys miss.”

In his first year as the starter last spring, Johnson was more passer than runner – except for when he led the Abes on a game-winning 90-yard drive in the final minutes to beat this same Lakes squad at Lincoln Bowl.

This fall, the training wheels are off – and Johnson is a full-bore dual threat. It helps he’s that much more comfortable in the offense in his second year. And he has also noticeably trimmed down.

“I feel like that is where the dual threat comes from, being able to do both – on the ground and throwing the ball,” Johnson said. “Just being super deadly at both, what is the defense going to do with it?”

BUT THE GAME’S DECISIVE PLAY WAS THROUGH THE AIR

Normally a strong-armed and accurate deep passer, Johnson did no real damage for much of the game against this good Lancers’ secondary.

But after Ki’marree Washington’s 16-yard touchdown dash for the Lancers cut it to 28-27 with 7:21 to go, the Abes faced a third and 7 on their end.

Coaches wanted Johnson to find Wayne on a hitch pattern along the left sideline to get the first down, and keep the clocking running. But Johnson remembered that Lakes cornerback David Wells had tried to jump short routes a few times earlier in the game, so he checked the play at the line of scrimmage.

Instead, he opted for “Hippo” – a hitch-and-go pass play.

Wayne off the line methodically, almost to lure Wells up. And as soon as the defensive back made his break, the big wide receiver raced right by him.

“I thought I did good (selling it),” Wayne said.

Johnson lofted a pass to Wayne in stride, and he finished off the 33-yard score. Johnson ran in the two-point conversion, and Lincoln led 36-27 with 3:58 remaining.

LAKES NEARLY PULLED IT OFF

The Lancers have had their share of upheaval this fall, including losing two-way standout Devon Nofoa-Masoe to a knee injury early in the season.

And coming into the biggest game of the year, Miller learned of the in-house outbreak Wednesday – and knew immediately his roster would be down a lot of key contributors.

Knowing he was at a serious disadvantage up front, Miller devised a game plan to attack the perimeter with quick throws by Brennan in the flat, and plenty of fly-sweep runs by running backs Leo Pulalasi and Washington.

Offensively, except for a pair of turnovers, the Lancers executed the game plan well. Brennan completed 11 of 14 passes for 214 yards and two touchdowns. Pulalusi rushed for 69 yards on nine carries, scoring twice. And Washington chipped in with 40 rushing yards on five attempts, also scoring.

“I think we wore them down a little bit, so we were able to soften them up … and attack the middle in the fourth quarter,” Miller said.

On defense, given the fact the Lancers rotated just one player who weighed more than 200 pounds along the line, they did a pretty good job on the Lincoln tailback duo of Navarre Dixon (18 carries, 91 yards) and Kelly Sio-Fetaui (eight carries, 29 yards).

“My kids played their butts off – but that is how they’ve been all year,” Miller said. “They have handled so much adversity, and they don’t blink and they keep battling.”

GETTING BACK TO WINNING 3A PCL TITLES

When Matsumoto was hired by the Abes in 2015, they were in the middle of a string of league championships.

And after regaining the 3A PCL title a year later, it was Spanaway Lake that emerged in the spring and dominated the league.

“This is something we have to cherish and work for,” Matsumoto said. “So we try and make a bigger deal out of it, and really say, ‘Hey, this is the first step to our ultimate goal.'”