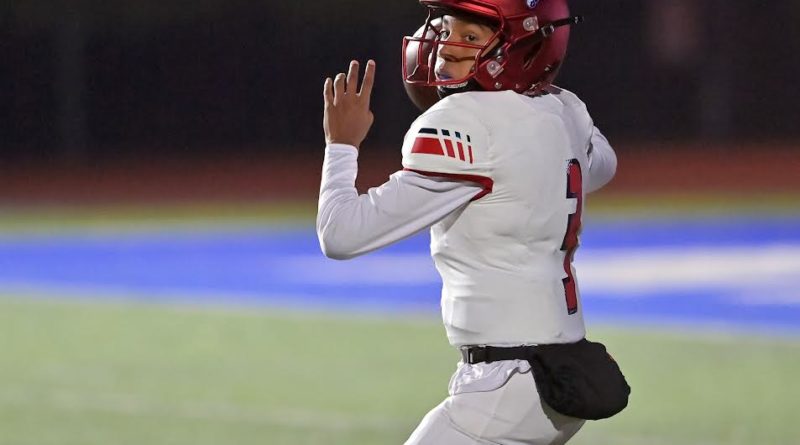 KENT – Lamont Richardson caught six passes for 114 yards and two touchdowns, Donovan Lowe paid off the game’s first drive with a 1-yard TD run on his way to a 74-yard evening and Kennedy Catholic beat Kentwood, 21-10, to grab the 4A North Puget Sound League title for the third consecutive season on Friday night at French Field.

The Lancers went 80 yards in 18 plays to open the game, held that 7-0 lead through the remainder of the first half before Kentwood cut the lead to four, 7-3, on Thomas Allam’s 27-yard field goal with 6 minutes, 15 seconds to play in the third quarter.

Kennedy extended the lead to 21-3 on their first two possessions of the third quarter on Richardson’s two scoring receptions from freshman quarterback Devon Forehand. That made Kamal Hamilton’s touchdown reception for the Conquerors (4-4, 3-1) with 8 seconds to go nothing but window dressing for the final score.

“They put this game last, it’s kind of like the Apple Cup,” Kennedy Catholic coach Sheldon Cross said. “It’s our rival game. The last three years in a row, the title came down to this, these opponents.”

Here are four observations from the Kennedy Catholic-Kentwood game:

THE WAIT IS ON

Both teams now wait until a week from Sunday to find out who each will open the Class 4A state playoffs against. That’s the day the WIAA seeding meeting takes place to determine matchups for the first weekend in November.

“For us, that’s good,” Kentwood coach Michael Bush said. “We can focus on ourselves, and not somebody else. The key is just to keep getting better. It’s about reps. With this bye week now, we can get more reps in.”

THE FUTURE HAS ARRIVED

As Kennedy Catholic put the finishing touches on another 4A NPSL crown, the Lancers did so with a different cast of characters from the previous couple of seasons. Those years, of course, were dominated by Washington high school’s all-time leading passer and current UW freshman Sam Huard, as well as a plethora of teammates who moved on to NCAA Division I collegiate programs as well.

The guy now leading the offense into the 2021 playoffs is another ninth grader in Forehand, who made just his second start of the season against Kentwood and wound up completing 22 of 26 passes for 244 yards and the two Richardson scores.

“I think you’ve gotta really know, to go to a freshman quarterback,” Cross said. “The last time we did it, it worked out well.”

That was Huard, of course. But even Huard’s team didn’t win a league title that season. Cross isn’t about to compare Forehand to Huard after two starts, but the Lancers have known for a while what they may have.

“We call him Russ,” Cross said, a reference to Seattle Seahawks star Russell Wilson. “There are kids at school who don’t even know his real name because everyone just calls him Russ. Early on this season, we just wanted Devon to make sure and settle in. But we had a gut feeling he’d have a season. He throws a good ball.”

The guy who started the first six games of the season, Mason Hayes, still is all over the field for Kennedy Catholic. He’s just moved back to wide receiver, where he played with Huard. And Hayes made five catches against the Conquerors, including four on the game’s first drive that ended in the Lowe touchdown run.

THE PREDICTED DEMISE MAY BE PREMATURE

With the victory, Kennedy improved to 6-2 overall (after an 0-2 start), and of course the 4-0 NPSL record to earn the third consecutive title.

“We had those first two games, those were two tough opponents (in Eastside Catholic and O’Dea),” Cross said. “I think people wrote us off, and that’s OK. We’ve got a good team, we’ve got a good DNA. We’re a championship program. This is our third championship in a row, and I’m proud of the guys.”

ONE PLAY CAN CHANGE EVERYTHING

The first Forehand to Richardson pass, a 46-yarder, seemed to finally ignite an offense that had stagnated since the game’s first drive. After earning 85 yards and the Lowe score, the Lancers managed just 74 more over more than two quarters of game clock until that play.

Kentwood held an advantage in total yards to that point, 200-159, and had dictated the clock.

“We just went into the locker room, told ourselves we’ve got to lock in,” Lowe said. “We knew we were going to beat them up front. We just had to execute. That’s all it was.”