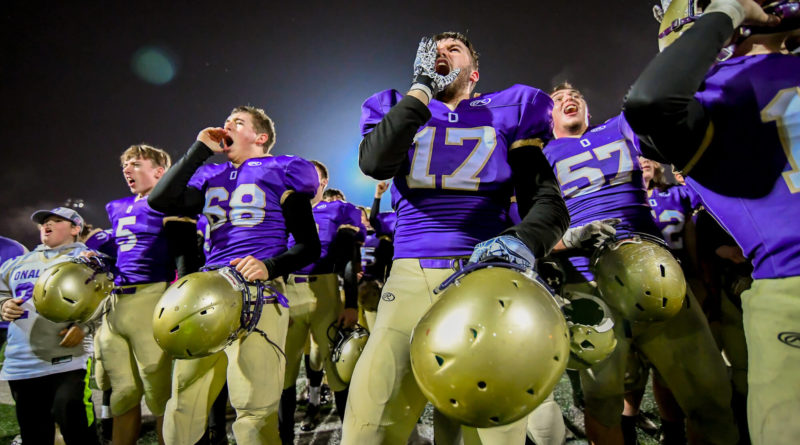 Whether it comes via phone call, email, text message, social-media direct contact or chirpy cockatoo – no pandemic-induced two-word message this fall has stirred a level of panic as intense as this one for high school football coaches and athletic administrators:

If an opponent contacts you early enough in the week, usually a team can find a replacement game. But the later the news breaks, the more difficult – and stressful – the endeavor becomes.

“It sucks,” Onalaska coach Mazen Saade said. “What do you tell your players? Be ready … because we might have another game, or we might not.”

Six months ago, when reigning Class 2B champion Onalaska was set to put the finishing touches on its fall football schedule, all that was left was to finding an opening-weekend opponent.

So, athletic director Dennis Bower reached out to Oroville, a eastern Washington program in Okanogan County. The two parties agreed to play a non-league game.

“We started getting ready for Oroville,” Saade said. “We exchanged film. And our booster club got us rooms at a hotel. We thought it would be great to get the kids experience going over the (mountains).”

Two days into practice before that game, Bower got a phone call from Oroville administrators: The team was struck with COVID-19 and had to shut down all operations.

“My reaction was, Here we go!’” Saade said. “We had just finished a year when we had just six games, but did not know if any of them were guaranteed.

“It is the biggest gut drop you’ve ever gotten.”

So, Saade, his coaching staff and Bower went into what he described as “The Great Scramble.”

They got on the phones, or on message boards, or started calling coaching friends to see if anybody had a lead on an unscheduled opponent.

Saade even noticed that one Tri-Cities media member – Matt Evans, of Evans Rankings – had sort of become the live-matchmaking hub for lost opponents looking for another game.

Evans has continued to serve in this capacity throughout the season.

“In all honestly, (messages from coaches or ADs) can range from a couple in a day, or 10 or 15,” Evans said. “It hasn’t been just ADs, or just coaches or players. It is a vast variety of folks who will contact me.”

And Evans can sense the level of anxiety by what day of the week it is.

“It depends mostly … on the timing of it,” Evans said. “If it’s on a Monday, they know they have a couple of days. But if it comes on a Thursday, it’s like, ‘What can we do, and who can we find?’”

In this instance for the Loggers, the week did not continue to go well. Saade was informed that the team was still charged $1,500 after cancelling its hotel reservations in Leavenworth.

Saade and Bower kept investigating leads in both Washington and Oregon. Montesano popped up – but the Bulldogs had their own COVID-19 issues. A couple of Oregon programs showed interest, but only if the Loggers were willing to travel.

And on Friday of that week, a better-suited program – 1A Foster – reached out to set up a Saturday game

“We heard from the guy at 3 p.m. Friday, so I tell them we are ready to go,” Saade said. “The kids are jacked. We have a 5 p.m. dinner. I go watch (Week 2 opponent) Napavine play. Then I call the Foster coach to confirm.”

Saade said he finally received a text-message apology the next day saying the verbal agreement fell through.

“By the end of Friday, when I had not heard back, our players knew nothing was going to happen,” Saade said. “They just had that gut feeling.”

Two more times this fall, including this week, schools have called to cancel games with Onalaska.

“These kids, they roll with the punches,” Saade said. “Last year opened their eyes to the fact there is no normalcy.”

No program, East or West, had more ups and downs in rescheduling the first half of the fall season than Liberty Christian, a Class 1B program in the Tri-Cities.

And although a couple of opponents canceled games for reasons other than COVID-19, two schools – Yakama Tribal and St. John-Endicott – had to shut it down because of pandemic-related reasons.

The good news is that in its rescheduling efforts, Liberty Christian found replacement games for four of the first five weeks.

The bad news? The Patriots played perennial 2B playoff team Tri-Cities Prep and 1B state favorites Odessa and Almira/Coulee-Hartline all on short notice – all on the road.

“From a COVID standpoint, these players have shown to be resilient,” Liberty Christian coach Craig Lukins said. “From a scheduling standpoint and who we’ve played – we took a beating. We played the top two teams in the state, and an 11-man team. We’ve been through the meat grinder … and that was tough.”

On top of that, Lukins did most of the reaching out for rescheduling games on his home became school athletic director Rick Godwin was battling COVID-19.

Then, Lukins had to shift gears in getting his players ready for a new opponent.

“It was tough. One week, we were preparing for St. John-Endicott … and then we had the defending state champions (Odessa) up in 16 hours,” Lukins said. “The mentality it totally different. And our last-minute prep was a couple of walkthroughs.

“But clearly we were willing to play just about anybody,” Lukins said.

LYNDEN CHRISTIAN: EXPERIENCED BOTH SIDES OF IT

Last spring, Whatcom County Class 1A powerhouse Lynden Christian was supposed to play Northwest Conference foe Meridian, but the game fell through because of the Trojans’ COVID-19 issues.

In mid-September, amid a campus outbreak, the Lyncs were the ones who had to nix their schedule game with Blaine.

“You feel guilty a team you were supposed to play lost a game,” Lynden Christian coach Dan Kaemingk said. “But at the same time, you feel a loss for your own kids and your own community.”

Oddly enough, earlier this month, both Lynden Christian and Onalaska were in search of a game – and finally settled on a matchup against each other. The Lyncs won, 38-20.

As far as the number of schools in Washington that have been affected by a COVID-19 cancellation, Evans estimates it is at least 140 teams so far this fall.

“It is not as shocking to the system as it was a couple of years ago,” Kaemingk said. “We play (Mount) Baker this week, And in any minute, I could get a text from my friend over there – Coach Ron Lepper – or we could do the same. It is possible.

“This feels like the new reality. When I look at a Friday night score, and I see one that surprises me, in the back of your mind you wonder if somebody was missing kids?”