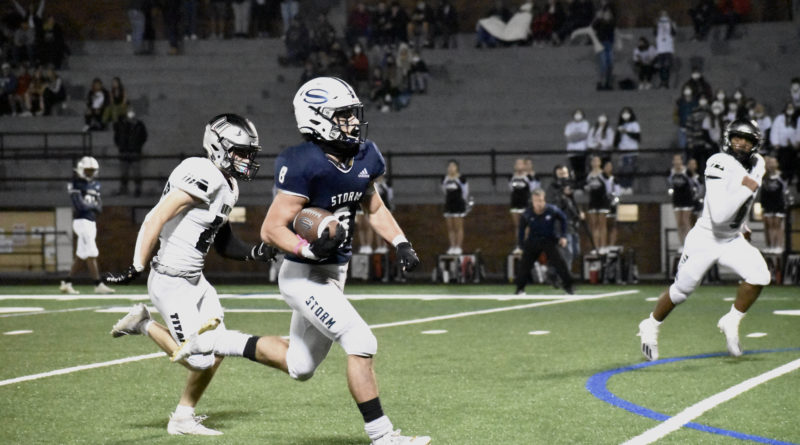 Ranked teams battled for league supremacy across the state in Week 7, with Arlington stunning No. 3 Marysville-Pilchuck, No. 5 Eastside Catholic narrowly edging No. 10 Rainier Beach and Moses Lake escaping Sunnyside in the CBBN, to name a few.

Behind the slate of game were, as always, a lot of standout individual performances. Which stood out above the pack? We’re keeping a running tally.

Here are the top Week 7 performances:

After running back Zac Abshire went down with a season-ending injury, his older brother showed he has speed, too, rushing for two touchdowns, including a 94-yard burst in a 30-7 win over Cheney.

After being asked to tap into his youth football quarterback roots, Bergeson showed why he’s more than just fill-in out of necessity, completing 11 of 20 passes for 235 yards and five touchdowns opposite an interception in a 42-0 win over short-manned SCAC foe Zillah. He also logged an interception on defense and returned it 31 yards for a touchdown.

Hauled in four long touchdown passes from his twin brother Derek, scoring from 69, 6, 29 and 31 yards. He finished with 161 yards receiving in a 42-0 win over Zillah.

Caught seven passes for 157 yards receiving and added eight solo tackles in a 29-7 win over Capital, reports The News Tribune.

Completed 22 of 39 passes for 359 yards, six touchdowns opposite one interception, added 99 yards rushing on 11 carries and grabbed an interception on defense in a 56-21 win over Bremerton.

Recorded five catches for 98 yards, including the game-winning 71-yard highlight reel-worthy touchdown in a 28-21 3A NPSL title-clinching win over Auburn Mountainview in the Ravens’ best season in program history. On defense, he had six tackles, a sack, 1.5 tackles for loss, an interception, a forced fumble and an interception.

Rushed 11 times for 129 yards and two touchdowns, including a 45-yard scoring run to put the first points on the board in a 48-30 win over Stanwood, reports Whatcom Preps.

Took six carries for 120 rushing yards and two touchdowns, took his one reception 33 yards for a third touchdown, kicked a 33-yard field goal and finished 6 for 6 on extra points in a 45-14 win over Mark Morris.

Took 10 carries for 165 yards and two touchdowns on the ground, including a 74-yard score, and connected with QB Lucas Razore on a 34-yard reception in a 53-7 win over Liberty of Issaquah.

Racked up 388 total yards and seven touchdowns in a 58-6 drubbing of Onalaska. He went 10-for-13 passing for 256 yards and four touchdown heaves and rushed for 132 yards on 11 carries with three more scores on the ground.

Took 26 carries for 206 rushing yards and a 57-yard touchdown in a 30-18 win over Cedar Park Christian, per The Everett Herald.

Turned 13 carries into 139 yards and three touchdowns in a 45-14 win over Aberdeen, reports The Chronicle.

Threw three touchdown passes while completing 7 of his 8 attempts to help the Panthers breeze past Meadowdale, 30-7, reports The Everett Herald.

Tossed three touchdown passes and rushed for 149 yards and a fourth TD in a 71-20 win over Kent-Meridian, per The News Tribune.

Workhorse Oregon State back rushed for 187 yards, one touchdown, five tackles for loss to two sacks in a 32-26 win over Montesano, per The Chronicle.

Tossed three touchdown passes and rushed for two more in a 46-7 win over Vashon Island, reports The Everett Herald.

Threw five touchdown passes and ran in a sixth in a 41-6 win over Bonney Lake, reports The News Tribune.

Scored on two big-gain touchdowns, on connections of 60 and 80 yards from quarterback Taylor Ioane in the first half of a 28-26 win over Camas.

Rushed 18 times for 149 yards and a touchdown in a momentous 37-7 win over Union, including a 42-yard burst in the game’s final minutes.

Caught seven passes for 169 yards and two touchdowns, rushed for another 15-yard touchdown and hit a 37-yard field goal in a 51-6 win over Elma.

The linebacker is everywhere – and tends to announce his presence through lumbering hits. He logged 10 tackles — one for loss — and three assisted tackles in a 53-7 win over Liberty of Issaquah.

Completed 10 of 14 pass attempts for 223 yards through the air with five touchdown passes and added 47 yards rushing in a 70-35 win over Vernonia of Oregon, reports TDN.

Logged 15 tackles, three interceptions and a punt return for touchdown in a 59-14 win over Kentridge.

Caught a career-high 10 passes for 148 yards and a touchdown in a momentous win over No. 5 Sumner.

Busy day for the freshman running back/linebacker. He rushed four times for 98 yards and two touchdowns and caught two more touchdown passes, finishing with 98 yards receiving, too, as well as four solo tackles, three tackles for loss, a sack and fumble recovery in a 72-0 win over Northport on Thursday.

Rushed for 175 yards and threw for 144 more in a 42-40 win over Seton Catholic, including a go-ahead four-yard run late, reports The Columbian.

Threw for three touchdowns and ran for two more and returned an interception for touchdown in a 73-0 win over Wapato, reports The Yakima Herald-Republic.

Threw five touchdown passes on 10-of-14 passing for 203 yards inn a 40-0 win over La Salle, reports The Yakima Herald-Republic.

Tossed four touchdown passes in a 63-0 win over Medical Lake to keep the Scotties in the hunt for a three-way tie scenario atop the 1A Northeast League.

Threw for all three of the Mustangs’ touchdowns in a 19-7 win over Othello, reports The Yakima Herald-Republic.

Returned a kickoff and a punt for touchdown, the latter a 64-yard game-winning effort to hold off Rainier Beach, 28-27.

Completed 31 of 41 pass attempts for 344 yards, three touchdowns and an interception to push Puyallup to double overtime before falling in the final seconds, 24-21.

Returned a punt 60 yards for touchdown to go with two scoring receptions in a 47-6 win over North Thurston, per The News Tribune.

Washington State pledge took 30 carries for 236 rushing yards, with touchdown runs of 90 and 28 yards in a 34-14 win over Sedro-Woolley.

The pass game opened, and Sloman was the Vikings’ biggest beneficiary. The speedy sophomore had five catches on five targets for 153 yards and two touchdowns in a 56-21 win over Bremerton.

There always room for more than one standout rushing performance at Squalicum. Smithson turned 10 carries into 150 yards and three touchdowns, including touchdown runs of 22 and 80 yards, in a 34-14 win over Sedro-Woolley.

Scored on a 52-yard in the first half and on a 31-yard pass from quarterback Kellen Flanigan in the final minutes of a 38-24 Battle of the Bell rivalry win over Mead.

Turned 26 carries into 164 rushing yards and three touchdowns to help lift the Ravens to their first 3A NPSL title in school history.

Caught a 73-yard touchdown pass and tallied 115 receiving yards on three catches in a 30-7 win over Meadowdale, per The Everett Herald.

Rushed for 231 yards and three touchdowns inna 35-24 win over Rogers, per The Spokesman-Review.

Turned 16 carries into 149 rushing yards and three touchdowns in a 34-22 win over Meridian, reports The Everett Herald.

Completed 17 of 24 pass attempts for 362 yards and three touchdowns opposite an interception and ran for another score in a 51-6 win over Elma.

Accounted for four total touchdowns — two on the ground and two through the air — in a 21-20 win over Ridgeline, per The Spokesman-Review.

The recent Eastern Washington commit completed 15 of 20 passes for 275 yards and two touchdowns through the air, as well as 71 rushing yards and two scores on the ground in a told-you-so 41-14 win over No. 5 Sumner.

Threw for 261 yards and seven total touchdowns, four rushing and three passing, in a 48-6 win over Dayton.