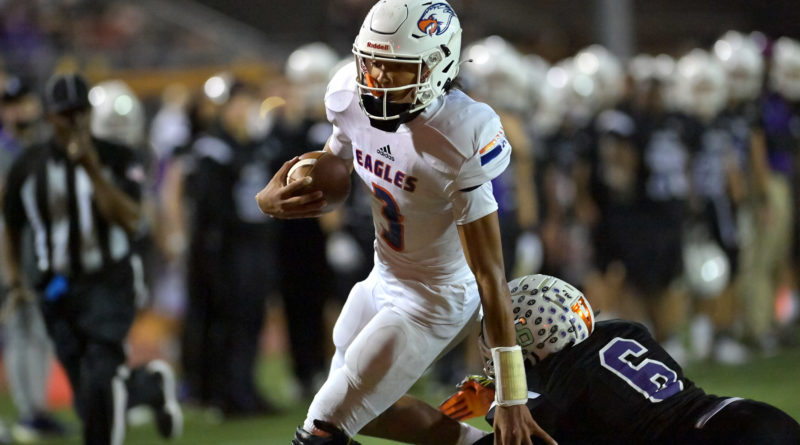 Even in a game where there was a considerable feeling-out process, once top-ranked Graham-Kapowsin found its groove – it became a dance party.

The Eagles scored three touchdowns in the final 4:46 of the first to turn a scoreless tie into a see-you-later 41-14 victory Saturday over No. 5 Sumner at a packed Sunset Chev Stadium.

Not surprisingly, Eastern Washington University quarterback commit was right in the middle of everything. He completed 15 of 20 passes for 275 yards and a pair of touchdowns, and added 71 rushing yards and two more scores.

“(Sumner) did a good job of changing some things they did on defense,” Eagles coach Eric Kurle said. “We had to slow it down a little bit … and go to some two-back stuff.

“Then the kids played lights-out after that.”

Here are five observations from the Graham-Kapowsin-Sumner game:

THE EAGLES WAITED PATIENTLY … THEN POUNCED

Normally a play-you-straight-up defense, Sumner instead gave the Eagles plenty of zone looks – and the Eagles responded with 13 rushing attempts out of its first 17 plays.

Wood was fantastic taking what was there – and eventually connected with tight end Andrew Savaiinaea, who got behind the Spartans’ secondary for a 25-yard touchdown at the 4:46 mark before halftime.

“We knew what we had to do going into halftime,” Wood said. “We knew we had to go down and score, and take control of the game.”

Once they started, they did not stop.

After a Sumner turnover, Wood scrambled around right end on the first play for a 24-yard touchdown – the Eagles’ second score in 21 seconds.

Sumner went three-and-out, and Graham-Kapowsin marched 92 yards on 12 plays. Wood capped it with his 6-yard touchdown keeper with 14.2 seconds remaining in the half. The Eagles led, 20-0.

“That quarterback (Wood) is really, really good,” Sumner coach Keith Ross said. “He’s by far the best player at quarterback in our league. He can run. He can throw.”

When the teenager first arrived in the Eagles’ program, Kurle admitted the coaching staff never saw him as a starting candidate.

But Pletcher improved so much over the summer, coaches now cannot keep him out of the lineup on defense.

“He’s just blossomed, and plays with so much energy, so much desire,” Kurle said.

And the guy who has played free safety, inside linebacker and outside linebacker for the Eagles this fall – he had a career moment late in the first half.

After the Eagles scored their first touchdown, Sumner went right to the air with Bo Carlson. And Pletcher was waiting.

“I saw (the wide receiver) release on a back-side post route, so I dropped back right into it,” Pletcher said.

He picked off the pass, setting Graham-Kapowsin up at the Spartans’ 24.

ASIDE FROM WOOD, NO G-K PLAYER IS MORE IRREPLACEABLE THAN JALEN DAVENPORT

Last spring, Jalen Davenport quickly carved out a reputation as a high-volume power running back hard to knock off his feet.

But this fall, his role has changed. He is the undisputed leader of the linebacking corps, and probably has more importance on defense.

That is not to say Kurle still doesn’t call his number when he needs a first down. He did that in the final minute of the first half – and watched his standout crumple to the ground, grabbing the back of his leg after a 1-yard loss.

“It was more of a bruise on his thigh … and scared him more than anything,” Kurle said.

Davenport returned in the second half, and made a key fourth-down stop of Carlson on a run. He finished with 69 rushing yards and two touchdowns. And he also flashed a booming leg as a punter.

Kurle said his staff has a pretty good workload-management system in place for the junior, but quipped, “he always wants to put in more.”

Ross was not only set on pounding the middle of the Graham-Kapowsin defense with plenty of Peyton Wing runs, he was also planning on utilizing a lot of two-back looks with Eric Buck back there as well.

Wing, the reigning 4A SPSL player of the year, saw plenty of action on Sumner’s opening drive with seven carries for 19 yards, and catching two passes for 14 yards.

But on his last 9-yard reception along the Spartqns’ sideline, he came up limping after tweaking a nagging knee injury.

Wyatt Redding’s 41-yard field goal attempt was later blocked, and Sumner came away with no points.

“We started off just like I thought we would … but (missing the field goal) hurt us,” Ross said.

Wing played one more series on defense, but was replaced for good with two minutes remaining in the first quarter.

HOW CAN A TEAM BEAT GRAHAM-KAPOWSIN?

Teams have tried many different ways – throwing on the secondary and running right at the Eagles’ defense. Little has worked.

Kurle chuckled at a question about how can his team be defeated, then gave as logical a response as can be.