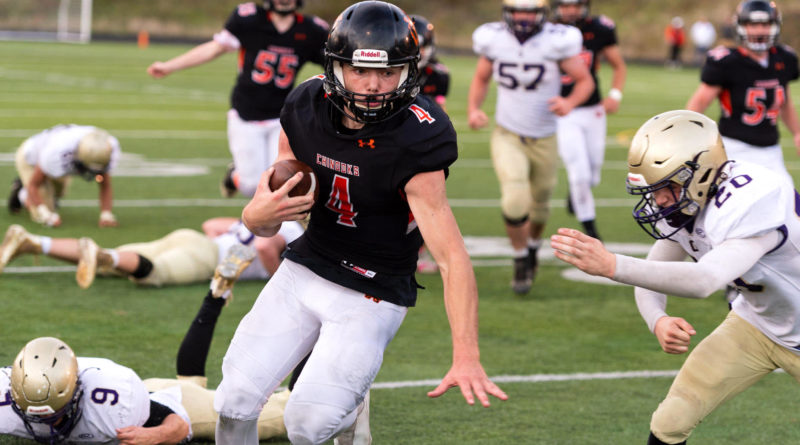 KALAMA, Wash. — There aren’t enough superlatives to accurately describe Kalama’s 58-6 walloping of Onalaska on Saturday. So let’s just leave it at one word:

Jackson Esary accounted for seven touchdowns and 388 yards of offense as the second-ranked Chinooks dismantled the seventh-ranked Loggers.

“You got to be ready for us,” Esary said to the rest of the 2B classification. “We’re coming, and we’re here to win.”

Onalaska and Kalama account for the last three 2B State championships. Kalama won in 2017 and 2018. Onalaska topped Kalama in the title game in 2019.

Esary was just a freshman tight end on Kalama’s last championship team. On Saturday, he showed how far he’s come since then. He threw for 256 yards on 10-of-13 passing, with touchdown throws to Jaxxon Truesdell, Max Cox and Jack Doerty (twice). He also ran for 132 yards on 11 carries and touchdown runs of 45, 8 and 1 yards.

“He’s an athlete you see only once every 20 years,” Kalama coach Sean McDonald said. “Anytime you have a player like that, you’re going to score a lot of points.”

Doerty hauled in four passes for 104 yards and two scores. He also forced the running clock with a third-quarter 95-yard interception return for a touchdown. The Chinooks (6-0) host Toledo next Friday in the penultimate game of the regular season.

Onalaska (2-4) had little going for it Saturday. They ran for 221 yards, with Marshall Haight’s 71 yards on 22 carries — including a 2-yard touchdown run — leading the way. But the Loggers also turned the ball over four times and tallied 82 yards in penalties. The Loggers hope to get back on track with a road trip to Adna next Friday.

The Chinooks have taken part in the last three 2B State championship games, so nobody was overlooking this high-flying squad. But what Kalama did to a very good Onalaska side is remarkable.

Kalama triggered the running clock early in the third quarter, after dominating every facet of the game. There’s plenty of season left and lots of teams that’d like to get a word in, but a Napavine-Kalama postseason game appears inevitable.

“We wanted to make a statement tonight, and I think we did that,” McDonald said.

There’s not a lot Jackson Esary can’t do. Especially when he’s afforded the time to do so. Onalaska didn’t send extra rushers at the senior quarterback too often Saturday, and that allowed Esary to sit back, move around the backfield and find his guys.

Jaxxon Truesdell (two catches for nine yards), Jack Doerty (four for 104) and Max Cox (four for 143) understand exactly where to be when Esary is buying time. It’s an emphasis in practice for Kalama, and allowed the Chinooks to hit repeatedly on big pass plays.

“I’ve been doing this for two years, just running in circles,” Esary said. “They’ve gotten really good at being open when they need to be.”

Kalama better up front than it gets credit

The Chinooks aren’t the biggest team in the trenches by any stretch of the imagination. They certainly weren’t against a plodding Onalaska team.

But Kalama proved up to the task in defending the triple-option attack the Loggers are known for.

“We brought a lot of pressure and the guys up front just played lights out,” McDonald said.

Loggers can’t get out of their own way

Even the Loggers can’t chop their way out if they get behind the sticks as often as they did on Saturday.

Onalaska committed 11 penalties for 82 yards. With a run-heavy approach, even a five-yard penalty can kill a drive. On Saturday, Onalaska could never get momentum as a penalties continuously sapped the life out of the Logger offense.

They also turned the ball over four times, which will surely be one of coach Mazen Saade’s talking points in practice this week.