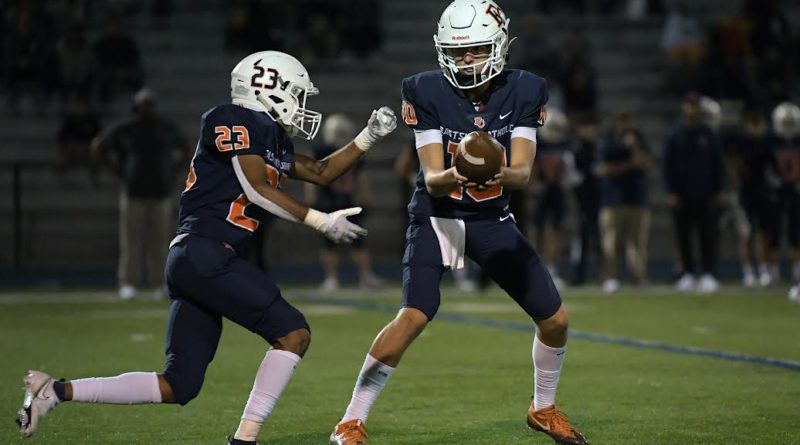 Turns out, the Eastside Catholic football senior standout was always built for those jobs.

The 5-foot-9, 175-pound Sanidad, in his first year returning kickoffs and second bringing back punts, padded his resume by taking one of each back for a touchdown as the host Crusaders fought off a stubborn Rainier Beach team, 28-27, in Friday night’s Metro League battle at Acosta Field.

Sanidad delivered the clinching blow for Eastside Catholic (6-1 overall, 4-0 Metro League) in a back-and-forth contest, juking and then scooting 64 yards for a punt-return touchdown with 2:08 remaining in the third quarter. His touchdown pulled his team even at 27-27 and Adam Jacobs booted the go-ahead PAT kick as the Crusaders fended off the hard-charging Vikings (3-3, 2-2).

“All season long (assistant) coach Dwayne (Pocknett) he’s been on my tail to return one,” said Sandid, who took back a kickoff 90 yards for a score early in the third quarter to give his team a 21-19 lead. “(Pocknett) goes, ‘We average one [return for TD] at least every game.’ And, I said, ‘That’s kind of tough.’ But nothing’s better than showing up for the community and for the team.”

The win gave Eastside Catholic the inside track to take the top spot in Metro’s Mountain Division over O’Dea (3-1), which it beat last week 24-14.

Sanidad’s second-half magic was a big reason the Crusaders came out on top in demanding game in which Rainier Beach outgained the Crusaders, 319-210.

“His moves and change of direction are insane,” said Eastside Catholic wide receiver Andrew Martorano, who hauled in an in-stride 50-yard touchdown pass from quarterback Brady McKelheer to wipe out an early 7-0 deficit late in the first quarter. “Those two [returns], I mean without him, in this game, we would’ve had a tough game. It would would’ve been tough without them.

“He’s just that type of guy. Put him anywhere and he’s going to make the play.”

Rainier Beach appeared poised for the upset victory when it took a 27-21 lead. That lead came on Scott’Tre Humphrey’s 2-yard waltz into the end zone and Chance Guadiz’s two-point conversion pass to Sir’ Asaad Shaki Davis with 5:22 left in the third quarter.

Here are four observations from the Rainier Beach-Eastside Catholic game:

It looked like when Rainier Beach junior Myles Daymon returned the opening kickoff to start the second half for a 71-yard touchdown that all the momentum was on the Vikings’ side.

But that’s when Sanidad, who also plays defensive back and receiver, turned the tide back to Eastside Catholic at least temporarily. Sandid took the kickoff following Daymon’s TD return up the middle and initially looked like he’d just run into a crowd, but a fake and burst got him loose to go 90 yards to the house for the 21-19 edge.

“Coming out of the halftime, they returned one back to the house,” Sanidad said. “It was just a statement to come back and then return one for us to take the lead again. I feel like that was really a momentum shift in the game.”

With Rainier Beach driving for the go-ahead score inside two minutes, Humphrey (146 yards, 1 TD on 19 carries) strained and stretch for an extra yard near the Eastside Catholic 37-yard line.

Humphrey, a 5-foot-11, 215-pound junior, got enough yardage for the first down, but as he twisted for even more, the football came loose and the Crusaders’ Peter Taoipu recovered the fumble with 1:56 remaining in the game.

After a Rainier Beach timeout and a 6-yard run by Masen Uribe gave Eastside Catholic a first down, all the Crusaders needed to do was kneel on the ball twice to preserve the win.

Added Sampson: “We’ve played back-to-back hard-nosed football games with those guys. Unfortunately, we came up short at the end. I thought we were going in to score and they called our guy [Humphrey] for a fumble and I thought he was down. But, in the end, we shouldn’t have given up that many points.”

DAVID LENE IS OFFENSIVE WEAPON, TOO

Twice when his team needed big first downs in short yardage, linebacker-turned-running back David Lene came through out of the “Wildcat” formation.

Down 13-7 and facing third-and-2 on the Rainier Beach 8-yard line, Lene scored a touchdown over the left side with a determined run and that put Eastside Catholic up 14-13.

Again on fourth-and-1 early in the third quarter, Lene, just a sophomore but stout at 6-foot, 215 pounds, took a direct snap and pounded out a 9-yard run to pick up a first down. The Crusaders failed to score and pad their 21-19 lead that time as Jacobs missed a 30-yard field goal.

Still, the Crusaders now know they can lean on Lene in crunch time when the need hard-earned yards.

Sampson knew his Vikings’ team was this good and can hopefully ride a confidence-gaining performance into a postseason run.

“We proved we are good football team and that we are disciplined, play hard and play smart. I thought we proved a point today.”

The Vikings just want two big plays they gave up on special teams back.

“Our special teams let us down this week,” Sampson said. “So, hopefully next week we’ll get it together and go back at [Seattle] Prep and be ready.”