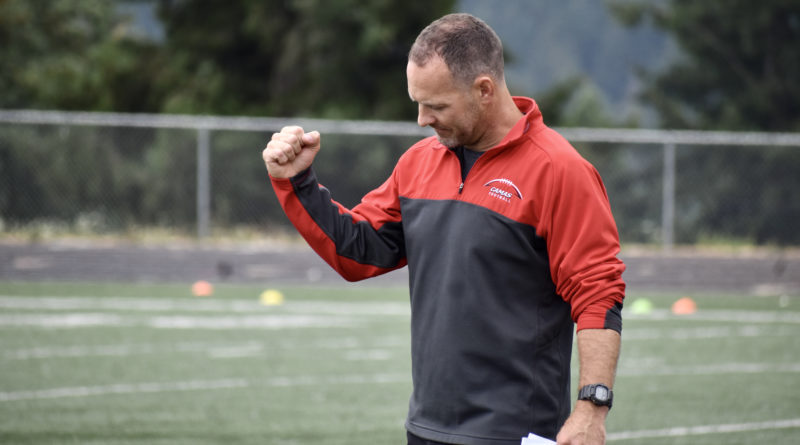 Jack Hathaway could have looked beyond a non-league game with a 2A school, even one as tough as Tumwater, to critical matchups the next two weeks with 4A Greater Saint Helen’s League foes Skyview and Union.

But the first-year Papermakers’ coach knew nothing could vault his team into that critical stretch of league play like a victory in a battle of 2019 state champions.

“It’s huge,” he said after Camas held off a furious fourth quarter Thunderbirds’ rally to claim a 28-26 victory at Tumwater District Stadium that went down to the final 30 seconds.  “To beat a program like that is really good for our kids’ confidence.”

Camas began the season 0-4 after losing to powerhouse Oregon schools each week, but has yet to lose against a Washington school.

“We’ve been through a ride like no other,” Hathaway said.

A loss is a loss, but Thunderbirds’ coach Bill Beattie got what he believes his team needs as the playoffs approach:  a night-long battle against a quality opponent.

“I guarantee that we’re better now than we were at the start of that game,” Beattie said.

Tumwater won the last 2A state tournament contested, in 2019, while Camas won 4A state that season, so fireworks were to be expected.  Fans got their money’s worth as the teams players what Beattie called “two different games,”

In the first half, the Papermakers took advantage of Tumwater mistakes and their own high-powered offense to take a 28-7 lead.

“We want to play great competition and teams like that are going to come out and get after you,” Beattie said.  “It took us a half to wake up.  We made way too many mistakes.

After Tumwater (4-2) capitalized on a Camas’ fumble to go up 7-0 early on a 1-yard run by Carlos Matheney, the Papermakers made it look like they would blow out Tumwater.

Twice they scored on bombs from quarterback Taylor Ioane to Mark Thorkelson, one from 60 yards out, the other from 87.

“We always look for those quick strike plays,” said Hathaway.

“Ioane threw great balls.  We had perfect blocking, so everything worked out for us,” he said.  “This was crazy.  That’s the Camas way.  We come out hard and keep going.  We don’t stop.”

“The first touchdown, I pump faked and saw the corner bit.  The second one, I could see they weren’t really ready, so I snapped it quick and he got by the press,” the quarterback said.

Then, a little more than five minutes before halftime, with Tumwater knocking  the door on third down from the Camas one, a direct snap to running back Payton Hoyt went awry and the Papermakers’ Nathan Criddle scooped the ball up and dashed 82 yards for a 28-7 lead.

But Camas would never score again as Tumwater methodically worked its way back into the game after a scoreless third quarter.

“We talked to our kids at halftime about not being complacent, reminding them who we were up against,” Hathaway said.  “We got a little conservative and we’re best when we’re going all out.”

Taking over at their own 27 late in that period, the T-Birds moved quickly to the Camas 30.  Quarterback Alex Overbay, who had taken over for starter Brady Prothero after halftime, threw a cross field pass to receiver Seth Weller to cut Camas’ lead to 28-14.

Holding Camas to just five yards on its next possession, Tumwater put together a 14-play, 69-yard drive culminating in another 1-yard touchdown blast by Matheney, who totaled 150 yards rushing.

What turned into disaster struck, though, when a bad snap on the extra point attempt left Tumwater down, 28-20.

With just three minutes to play, the T-Birds needed to recover an onside kick and did.  This time, they drove 45 yards in nine plays and scored when Overbay, who completed 8 of 10 passes for 113 yards, found Ryan Otton for a 21-yard touchdown.

“Alex stepped in and did a fantastic job during the second half,” said Beattie.

On the two-point conversion, though, the guy who had shined in Camas’ passing game, Thorkelson, stymied Tumwater’s, stepping in front of tight end Austin Terry to intercept Overbay’s pass.

“I saw the quarterback staring (Terry) down, so I just went there and got it,” Thorkelson said.

In addition to Matheney’s production on the ground, Tumwater got 105 yards rushing from Hoyt.

The T-Birds next opponent will be Pioneer Bowl rival Black Hills, but Beattie says the job at practice over the coming days will be to reduce Tumwater’s own mistakes as much as working on a scouting report.

“I can’t wait for Monday,” Beattie said.  “I can’t wait to get back out on the field.  Our kids are going to be hungry to play next week.”