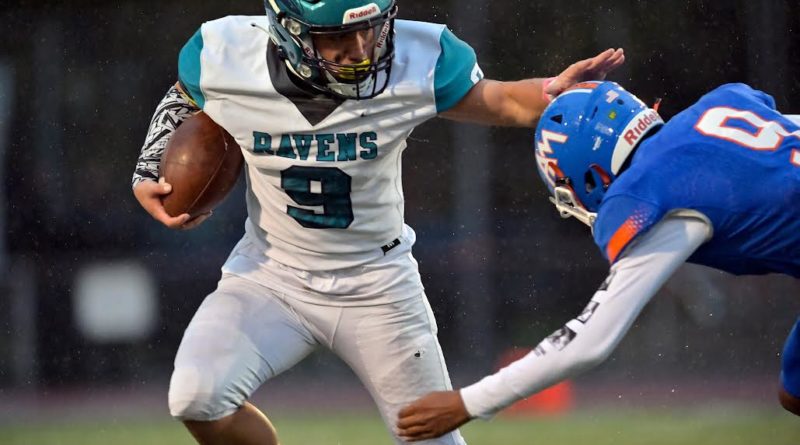 AUBURN, Wash. – Andrew Butler somehow grabbed a pass that seemed destined to be at least batted away, broke a tackle and raced 71 yards down the sideline in front of his teammates on the Auburn Riverside bench for the game-winning touchdown on Thursday night at Auburn Memorial Stadium.

Butler’s play, with 5 minutes, 31 seconds to go, gave the Ravens a 28-21 victory over rival Auburn Mountainview, the 4A/3A North Puget Sound League title and the league’s top seed into the postseason that begins in a couple of weeks.

“I talked to the guys the entire game about, just stay ready for your moment,” second-year Auburn Riverside coach Greg Herd said. “He stayed ready for his moment. A big play, toe-tapping on the sidelines, too, so just a ton of guts from our guys.”

Here are four observations from the Auburn Riverside-Auburn Mountainview game:

The Ravens beat both Auburn and Auburn Mountainview this fall as they’ve marched to a 6-0 overall record, including 3-0 in league play.

“It belonged to Auburn for the first 20 years or so,” Auburn Mountainview coach Jared Gervais said of the trophy. “Lately, it’s gone back and forth between us (the Lions and Ravens, who each have won it four times in the past eight years).”

For the first 16 minutes of this one, it looked as if a Ravens’ rout was developing.

Auburn Riverside scored the game’s first two touchdowns, taking a 14-0 lead with 10:10 to go in the second quarter on Thaddeus Umi-Tuato’o’s second touchdown run of the game, from 15 yards out.

On two of its first three possessions, Auburn Mountainview made mistakes that led directly to both of those scores. Three plays into the game, Lions quarterback Kayde Bodine was intercepted by Diego Flores, who returned the ball to the Auburn Mountainview 9-yard line for a first and goal.

Two Umi-Tuato’o runs later, the Ravens led it 7-0 at the 10:10 mark of the first quarter. Two possessions later, a Bodine pass fell incomplete on a fourth-and-18 from the Ravens’ 30.

The Lions forced an Auburn Riverside punt on the ensuing drive, but then muffed the punt return. The fumble was recovered by the Ravens at the Auburn Mountainview 28. Four plays later, three of them Umi-Tuato’o runs, and he was in for that second score.

The senior finished with 164 yards rushing on 26 carries.

“We have a lot of seniors,” Umi-Tuato’o said. “And we’ve worked since summer to get here. Our O-Line is really good.”

“Football is about, offensively, getting the ball in the hands of your playmakers,” Herd said. “Getting that guy touches and touches so he can go do his thing. The line played really well tonight, as well.”

Despite the deficit, the Lions (4-2 overall, 2-2 league) rose up over the final eight minutes of the first half.

Johvaea Vailoa finally got Auburn Mountainview on the scoreboard on his 3-yard plunge capping a 60-yard drive with 6:15 remaining in the first half. Bodine then connected with Nazar Stasyuk for a 12-yard scoring pass with 11 seconds to go in the second quarter to complete a touchdown trade between the teams in the final 51 seconds, and Auburn Mountainview had closed to 21-14.

The Lions managed to keep Auburn Riverside out of the end zone on the first possession of the third quarter, despite a roughing-the-punter penalty that extended the Ravens; drive and helped push Auburn Riverside, ultimately, down just shy of the Auburn Mountainview 23.

That’s where a fourth-down pass completion from Accetturo to Thyrou Umi-Tuato’o came up less than a football length short on a fourth-and-4 attempt. Five plays later, Vialoa smashed his way into the end zone to complete a hard 26-yard run and tie the game at 21-21 with 5:24 to go in the third quarter.

The Lions just couldn’t make the play they needed to get over the top.

On two fourth-quarter possessions (not including a desperation try in the final 21 seconds), Auburn Mountainview drove to the Ravens’ 14 each time.

The first trip, Joeray Kilgore was tackled for a 5-yard loss on a fourth-and-2. The second time, a fourth-and-6 pass from Bodine was batted down with 1:50 to go.

Bodine did start, despite a deep bone bruise in his right throwing shoulder. But following his second interception of the first half, the junior gave way to running back Vialoa, who turned the Lions’ offense into more of a power “Wildcat” threat.

It worked for 118 yards and two touchdowns, including the game-tying score, for the emergency quarterback. However, when the first of the two late drives stalled at the 14, Bodine tried again.

He re-entered the game for the third time to lead the second fourth-quarter drive again as far as the Ravens’ 14 before the final pass was knocked down.

“We had kind of stalled out on the one drive, and the reason we had was because of a lack of communication,” Gervais said. “Just kind of the no-huddle nature of our offense makes it hard to adjust. Kayde does so much for us, making us right even if we call the wrong play. Looking back, of course, I wish we could have stayed in it (the big set with Vailoa). But that’s kind of the reasoning about why we got out of it.”