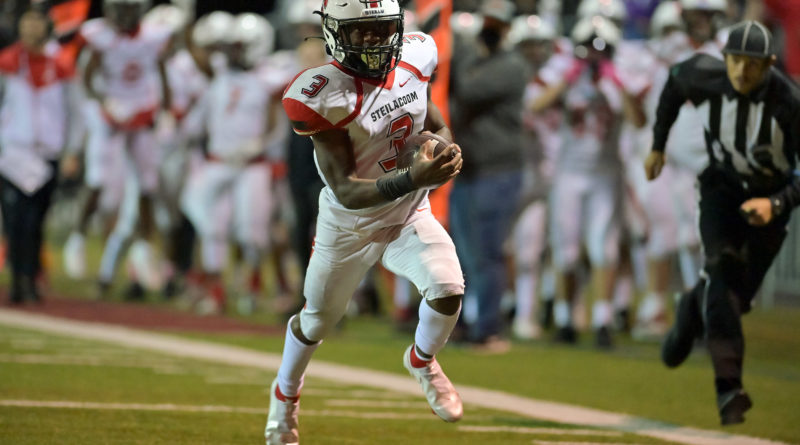 UPDATE: After voting closed Friday morning, Almira/Coulee-Hartline senior lineman Reece Isaak’s pair of forced turnovers in the Warriors’ win over Odessa were voted the top play in the state of Washington in high school football games that took place between Oct. 7-9. View the full results here.

Defenses reigned supreme across the state of Washington in Week 6.

From game-sealing interceptions, momentous forced fumbles and a litany of scoop-and-scores, which play stood out above the rest? SBLive narrowed down the 10 best plays of the week for you to decide between. Cast your vote below. Voting ends on Friday at 9 a.m. and the winner will be announced shortly thereafter.

Finley Bragg, Woodinville (4A): Kicked a 34-yard field goal with three seconds left to lift the Falcons to a 16-14 win over 4A KingCo district rival North Creek.

Auden Eggers, Newport of Bellevue (4A): The 6-foot-6, 28-pound defensive lineman returned a fumble 94 yards for touchdown against No. 1 Bellevue.

Reece Isaak, Almira/Coulee-Hartline (1B): Forced two third quarter turnovers — first a tipped interception recovery on an option pass, then a  forced fumble after rocking the opposing quarterback on the very next drive — in a momentous 50-20 win over No. 1 Odessa.

Jaelin Green, Rainier Beach (3A): The sticky-handed receiver hauled in a pass from Chance Guadiz through two defenders in a 41-0 win over Garfield.  (Credit: Northwest Ballers)

Jarrett Jacobsen, Davenport (2B): The linebacker picked off a pass as time expired to preserve a 51-50 win over Liberty of Spangle in a Northeast 2B clash.

Myles Mayovsky, Kennewick (3A): Hauled in a 94-yard kick return for touchdown in a 34-20 loss to Kamiakin. (Video credit: Northwest Ballers)

LaDaimien McCord, Heritage (3A): 80-yard pass from Kahlil Osborn in the second half of a momentous 16-13 win over Evergreen, just moments after McCord tipped a pass to the end zone for a Timberwolves interception. (Video credit: Tim Martinez, The Columbian)

Dishawn Misa, Eastside Catholic (3A): Returned a scoop-and-score in a win over O’Dea — one of the Crusaders’ eight forced turnovers. (Credit: O’Dea Digital Media Club)

De’Andre Napier, Steilacoom (2A): The senior returned a kickoff to the Enumclaw 34 yard line, hurdling a defender in the process, setting up his 26-yard end-around touchdown run to lift the Sentinels to a 14-7 win.

Wyatt Redding, Sumner (4A): Here’s one way to detect a standout high school kicker — breaking your own school record, like Redding did by hitting a 54-yarder against Curtis. He set the record as a sophomore.