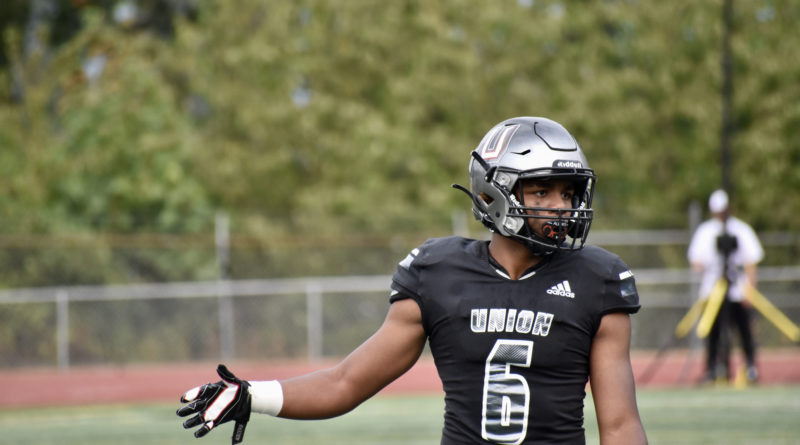 Week 6 of the high school football season features the top matchups in some of the state’s most competitive leagues, a No. 1 vs. No. 2 8-man showdown in Coulee City and, as always, a long list of outstanding individual performances.

Which ones stood out above the pack? We’re keeping a running tally.

If you know of an individual performance worthy of recognition that took place in Week 6, please let us know in the comments, on social media @SBLiveWA across platforms or by email to andy@scorebooklive.com. This post will be updated as more games are played.

Here are the top Week 6 performances:

Caught 11 passes for 127 yards and two scores, highlighted by a 60-yard go-ahead touchdown late to lift new Ridgeline to its first win as a program, per The Spokesman-Review.

Finished with 120 yards on eight carries, including a 65-yard touchdown run in a 51-14 win over Oak Harbor, per Whatcom Preps.

Accounted for 214 passing yards and five total touchdowns in a 52-6 win over Curtis.

Finished with five catches for 113 receiving yards, a rushing touchdown and two interceptions on defense for the red-hot Spudders (6-0) in a 42-0 drubbing of Mark Morris.

Scored twice on the ground and had an interception on defense in a 63-9 win over Newport of Bellevue.

Scored on both sides of the ball — a 69-yard interception return for touchdown and a touchdown reception in a win over Mariner.

Rushed eight times for 157 yards and two touchdowns in a 48-6 win over North Thurston, reports The News Tribune.

Rushed for 128 yards and a touchdown and threw a touchdown pass to Austin Terry in a 58-0 win over Shelton.

Was responsible for 266 passing yards and four touchdowns to help No. 9 Lakeside stay undefeated on the season, per The Spokesman-Review.

Junior quarterback was an efficient 15-for-18 passing for 186 yards, threw two touchdown passes (opposite one pick) and ran 20 yards for another, finishing with 49 yards in his best performance of the season.

Was involved in five touchdowns in a program-defining 50-20 win over No. 1 Odessa., including runs of 52 and 36 yards and a more than 70-yard gain from a pass to Grady Murray.

Forced two game-altering turnovers in the third quarter of a momentous 50-20 win over No. 1 Odessa — a tip interception on a quarterback option pitch and a fumble forced on a hard hit.

Erupted for a career-high 257 yards rushing and five totals in a 43-6 win over Battle Ground, his second 200-plus rushing performance of the year.

Accounted for 285 passing yard, 110 rushing yards and six total touchdowns (five passing, one rushing) in a 44-0 win over Bonney Lake, per The News Tribune.

Finished with 215 rushing yards and four touchdowns in a convincing 35-14 win over Kelso, per The Columbian.

Racked up 262 yards receiving and four touchdowns on 12 receptions in a 42-40 win over Winlock, reports TDN.

Had five catches for 98 yards, an 80-yard interception return for touchdown, blocked two extra point attempts and went 5 for 5 on PATs in a 35-18 win over Eatonville.

Tallied 183 rushing yards and three touchdowns on limited carries in a 56-7 win over Mariner.

Tipped a pass in coverage to a teammate for an interception, caught touchdown passes on 80 and 40 yards and finished with three catches for 130 yards receiving and 28 rushing yards in a win over Evergreen, per The Columbian.

Rushed for 159 yards and three touchdowns in a momentous 35-7 win over Central Valley.

Took 24 carries for 130 rushing yards and a touchdowns as Timberline pulled away from Capital, 28-14, reports The Olympian.

Completed 23 of 40 pass attempts for 265 yards and three touchdowns, including a corner fade to Payton Graham to go ahead two scores in the final minutes of a big win over Kennewick.

Turned a fumble recovery scoop-and-score and grabbed an interception in the final minutes to hold off O’Dea, 24-14.

The senior quarterback connected on four long-gain touchdown passes of 37, 47, 34 and 53 yards in a 55-13 win over Marysville Getchell.

Rushed for three touchdowns in a 41-7 win over Skyline.

Racked up 282 passing yards and four touchdowns in a blowout win over winless Rogers of Spokane, per The Spokesman-Review.

Completed 24 of 52 pass attempts for 290 yards and three touchdowns, including a 15-yard game-winning pass in double overtime, per The Yakima Herald-Republic.

Tallied all six of his team’s touchdowns and 364 yards of offense in a 40-7 win over Newport.

Turned 20 carries into 119 rushing yards and two touchdowns in a 29-14 win over Gig Harbor, reported The News Tribune.

The well-practiced kicker had a busy night. He broke his own school record he set as a sophomore with a 54-yard field goal in a 52-6 win over Curtis, recovered his own onside kick, converted a fake punt and sent eight kickoffs for touchback.

Turned 27 carries into 116 yards rushing and a touchdown in a 34-20 win over 3A MCC power Kennewick.

Smith had the Panthers back to their winning ways, going 19 of 22 passing with 262 yards and a touchdown through the air, as well as 182 rushing yards on 13 carries and four more touchdowns in a 35-21 win over Ballard.

Returned a punt 72 yards for touchdown and caught four passes for 78 yards and scored on a six-yard run.

Recorded two touchdowns and 141 receiving yards on seven catches in a loss to Elma.

Sacked the quarterback three times in a momentous 34-20 win over Kennewick.

Rushed for 147 yards on four carries, highlighted by a 70-yard touchdown run in a 49-13 win over Mount Vernon.

Three of the Crusaders’ eight forced turnovers were Weaver interceptions — a breakout night by the sophomore cornerback.

Tallied 184 total yards and three touchdowns — 137 and two touchdowns on the ground and a 20-yard touchdown on a screen pass, reports The Everett Herald.

Ran for 167 yards and three touchdowns on five carries and took the opening kickoff back for a touchdown in a 54-7 win over Highland, per The Yakima Herald-Republic.

If you know of an individual performance worthy of recognition that took place in Week 6, please let us know in the comments, on social media @SBLiveWA across platforms or by email to andy@scorebooklive.com.

How the Top 25 fared (all-classification)