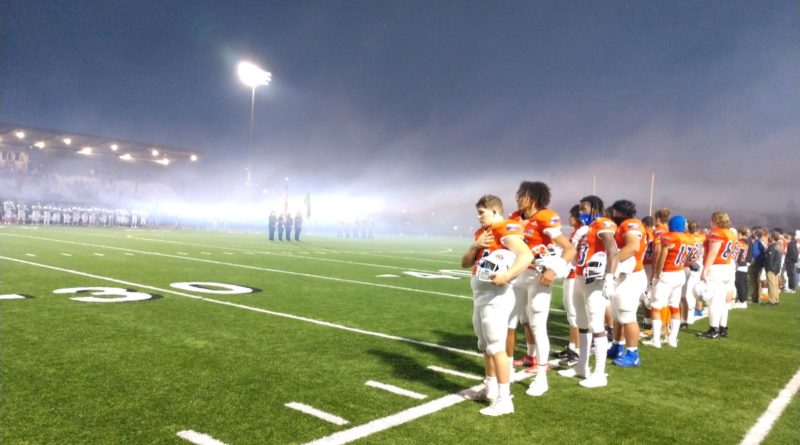 No. 1 Graham-Kapowsin continued to bully its way through the 4A South Puget Sound League football ranks on Friday night. This time, the Eagles dispatched with the first of two straight teams that entered play this week unbeaten like themselves.

Graham-Kapowsin recorded its fourth shutout in six games, as well, with its 41-0 victory over visiting Bellarmine Prep at Art Crate Field.

The Eagles now have outscored their six opponents, all in league play, by an astronomical 284-15.

Despite the gaudy numbers over the first two-thirds of the schedule, Kurle said his team isn’t invincible.

“We’ve got to get better,” Kurle said. “We make mistakes that we see all the time. We’ve got to improve, and that’s our biggest thing. We talked about to our kids, what we’ve got to do. Yeah, we’ve got to execute against what they’re doing, but we have to take care of what we’re doing.”

The mistakes Kurle speaks of may not be so noticeable to the average person, especially after a game in which the opponent had eight consecutive three-and-out possessions to start the game resulting in three total yards of offense for the Lions prior to their final time with the football in the fourth quarter.

Bellarmine finished with 58 yards of offense, thanks to the 55 yards the Lions gained on their final possession of the game. Bellarmine also earned its first first down of the game two plays into that drive, getting a 14-yard pass completion off the arm of sophomore quarterback Tyler Stowers with just under four minutes to play.

By the time that completion happened, the Lions already were down 41-0 and there was a running clock invoked after Marques Naputi’s 11-yard touchdown run extended the G-K lead past the 40-point mark. That came with 2:24 left in the third quarter.

“We just want to stay physical, stay dominant,” junior running back and linebacker Jalen Davenport said. “Show that we’re not going to let you come out here and just walk all over us. So we stay aggressive. Our defense is really strong physically.”

Stowers had to be in the game after junior starter Ty Faker was hit by two of those Eagles defenders on Bellarmine’s first possession of the third quarter. Faker was letting go a pass on third down, got hit and crumpled to the turf.

He was helped off the field and did not return. After the game, his left ankle was wrapped tightly and Faker was using crutches to make his way back to the locker room.

He and assistant coach Sefo Liufau indicated that they did not know the severity or exact injury yet.

While the Lions changed quarterbacks out of necessity, the Eagles had the luxury of playing virtually everybody thanks to another huge performance by the starters.

The final G-K touchdown run, from Naputi, was the fourth on the ground of the game by the fourth different running back to score on Friday. Naputi, who took the handoff from the second quarterback to play in Cohen Miller, followed Khalil Yarbro (five yards), Zack Lee (eight yards) and Davenport (three yards).

In all, 12 different Eagles had at least one rushing attempt in the game, good for 301 yards on the ground. Graham-Kapowsin quarterbacks also threw for 219 yards, giving the team 520 yards of offense in the game.

Of those passing yards, newly-minted Eastern Washington commit Joshua Wood accounted for 198 on 15 of 20 passing. He had the first two scoring plays, on passes to Andrew Savaiinaea (11 yards) TD on the team’s first possession and Julian Mason (21 yards) on the second to stake the Eagles to a 14-0 lead less than 10 minutes into the game.