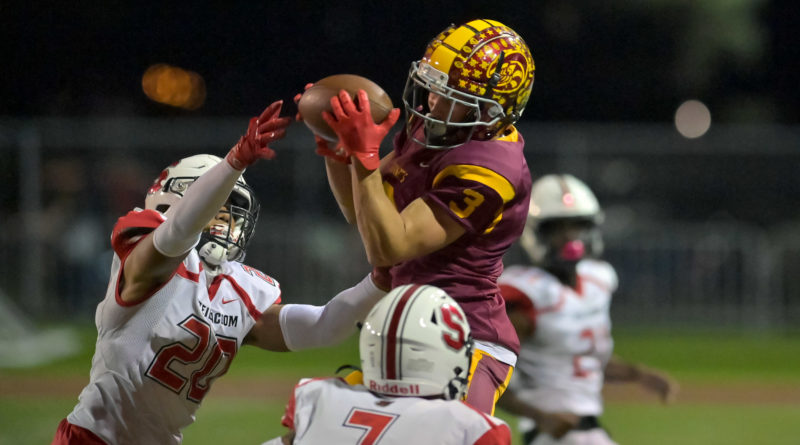 ENUMCLAW – The mode is certainly different, but the results are still the same for sixth-ranked Steilacoom High School.

Paced by a high-pressure defense – yes, defense – the Sentinels survived a country grinder, 14-7, against No. 7 Enumclaw on Friday night at historic Pete’s Pool (Enumclaw Stadium), taking a huge step toward clinching their third consecutive 2A SPSL crown.

Steilacoom won despite being outgained, 286-160, in yardage. Its defense was fantastic all night, officially closing the door by forcing a Malcolm Harper incompletion from the Enumclaw 30-yard line on fourth down with 63 seconds remaining.

“We feel great,” Interim Steilacoom coach Kyle Haller said. “We knew this was a big test in the middle of the season. But we also we haven’t handled business in the way we’ve wanted to.

“We are not overlooking anybody.”

Here are four observations from the Steilacoom-Enumclaw game:

REHEARSE THE CODE, PLAY BY THE CODE

With all the star power that graduated from the offensive side of the ball, including wide receiver Emeka Egbuka and quarterback Chance McDonald, the Sentinels’ defense anticipated this might be the season it carries the load.

And leading up to the start of games, the unit came up with a slogan: “Molon Labe.”

“In Greek, it means, ‘Come and get it!'” Steilacoom two-way all-league lineman Sam Stowers said.

This defensive front has no problem doing that.

On seven of Enumclaw’s nine drives, the Sentinels made at least one tackle for loss – and 10 total, led by Stowers and Nicholas Barnes on the line, and Austin Kinney and RJ Brewster in the linebacking crew.

And they even blocked a 34-yard field goal attempt in the second half.

“They’ve been doing that to our offense all year (in practice),” Haller said. “We knew this group was special … with a lot of speed, and a lot of guys that haven’t truly had an opportunity. It was there for them.

They been doing that tour offense all year. We knew this group was special – a lot of speed and a lot guys that haven’t truly had an opportunity. It was there for them.

ONE PLAY – A STOWERS EXCLUSIVE – SET THE TONE

This game, especially early on, had a feel-you-out championship tension to it.

And Enumclaw coach Mark Gunderson made the call that shifted the momentum of the game.

In a scoreless tie, the Hornets’ offense stayed on the field for a fourth-and-4 (inches) play from their own 20 with 5:20 remaining in the first half.

Harper, a dual threat, just kept the football himself on a sneak up the middle.

“Sometimes those (gambles) work; sometimes they don’t,” Gunderson said. “Fourth and inches … I am betting on our guys again. But we gave them seven points there, and that was a factor in the game.”

Steilacoom capitalized on the instant-red-zone possession by 20 yards in six plays, capped by Jaycion Cain’s 1-yard touchdown run up the middle to give the Sentinels a 7-0 lead with 1:49 to go in the half.

THE ENGINE OF THE STEILACOOM OFFENSE? TWIN TAILBACKS

Senior De’Andre Napier and Cain, a sophomore, are not really twins – but when they come through the line of scrimmage on a carry, they have similar builds, running styles and big-play capability.

And here’s the thing: They root for each other.

“When we met each other, we clicked,” Cain said. “We give each other energy.”

After Enumclaw tied the game at 7-7 on Emmit Otero’s 5-yard touchdown scamper with 8:50 to go, Napier answered in a big way.

He took the ensuring kickoff back to the Hornets’ 34, even hurdling a guy along the Enumclaw sideline at the end of the return. Three plays later, he took a carry around the left end 26 yards for the game-winning touchdown at the 7:08 mark.

Cain finished with 61 yards on 13 carries, while Napier added 58 yards on 12 carries.

“We like them a lot,” Haller said with a smile. “They both catch the ball. Both are willing blockers. Both have really good vision, and when they hit a hole and take off … they have speed.”

BEHIND OTERO AND DYLAN WATTERSON, HORNETS HAVE BOUNCE-BACK CAPABILITY

Gunderson will certainly bite his life watching the review of this game film as his offense marched inside the Sentinels’ 35 on five of their drives, but only came away with a touchdown.

“We couldn’t finish it. That is not like us – we finish those off,” Gunderson said. “But that’s a good football team over there.”

Otero was a hard charger between the tackles, with just enough elusiveness to break off a few big plays. Enumclaw’s primary running back finished with 107 yards on 24 carries while adding four receptions for 40 yards.

And Dylan Watterson does have legitimate home-run playmaking ability. On defense, he stopped an early Steilacoom series with an interception. And on offense, he had 53 yards on seven carries.

“Emmit never seems to take that big hit,” Gunderson said. “And Dylan, he’s got a chance to take it the distance every time he touches it.

“Those guys are pretty fun to hand the ball to.”