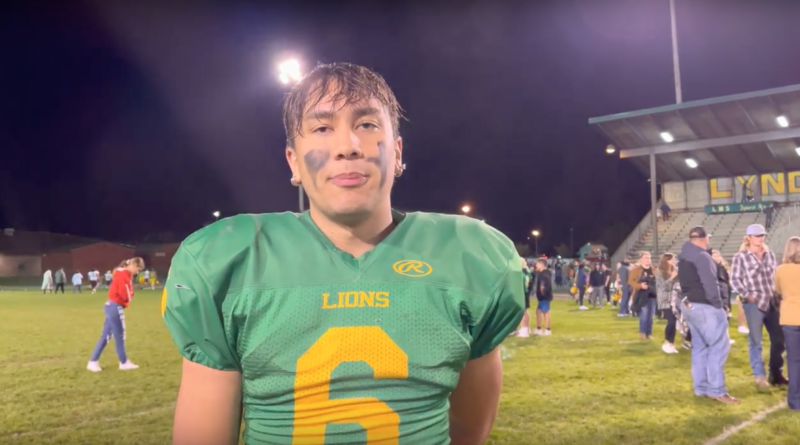 The top of the 2A Northwest Conference is getting a little less crowded.

Coming into the season, it looked like Lakewood, Lynden and Squalicum would be battling it out for the district’s two berths to the state playoffs.

Now 3-0 in conference play, the Lions are well in control of the rest of the regular season and beyond, while the Cougars are now on the outside looking in for the postseason.

Fast start for the Lions

Lynden had no trouble moving the ball its first two possessions coming away with touchdowns in each.

The Lions fed running back Lane Heeringa on both drives, which eventually set up long touchdown passes of 38 and 67 yards from quarterback Kaedan Hermanutz to wide receiver Kaleo Jandoc. The pair connected for four touchdowns on the night.

Lynden led 14-0 less than eight minutes into the game.

The Cougars and quarterback Justice Taylor found their flow after the first quarter.

Taylor and the Cougars offense dictated the pace of the game in the second quarter picking up two touchdowns to get right back into the game. If it weren’t for a blocked extra point, the game would’ve been tied at 14 heading into halftime.

Lakewood took the lead on the opening possession of the second half with a 9-yard run from Taylor and held all the momentum.

Down, but not out

After the Taylor touchdown to open the second half, Lynden’s following possession couldn’t have been more important.

Having returned the kickoff to the Lakewood 31-yard line, the Lions were working with a short field and not much later, for the third time of the game, Hermanutz and Jandoc connected for a score, this one from 17 yards out.

Lakewood offense couldn’t get going in second half

Except for the touchdown on its first drive of the third quarter, the Lakewood offense wouldn’t cross the goal line in the second half.

A three-and-out, interceptions on back-to-back possessions and a turnover on downs was all the Cougars’ offense would put together the rest of the game.

Lynden was finally able to get pressure in the backfield which turned the game back in the Lions’ favor.