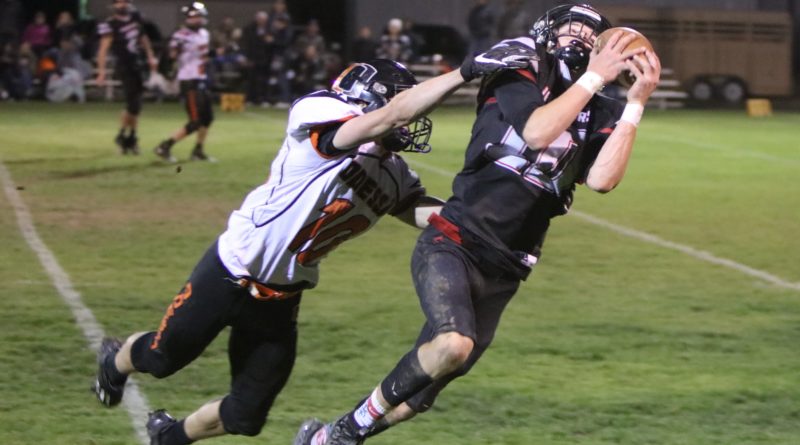 Odessa has played very few close games during its dominance atop the 1B classification.

Now, for the first time in years, the Tigers have something to chase.

Dane Isaak accounted for five touchdowns and Reece Isaak forced two third quarter turnovers to lead No. 2 Almira/Coulee-Hartline to a 50-20 win in Coulee City on Friday night, handing No. 1 Odessa its first loss in nearly four years in a battle between state 8-man powers.

“I tell you what, it feels really good,” ACH coach Brandon Walsh said. “Our kids played hard. That was a fun one.”

The No. 1 Tigers (5-1), the two-time defending 1B state champions, bussed into Coulee City with a 37-game win streak, and left with heads dropped. Odessa coach Jeff Nelson said some players felt “embarrassed.”

“They out-coached us, outplayed us, they were bigger and more physical than we were,” Nelson said.

In the 8-man game, punting was nonexistence, teams onside or squib kicked every kickoff and not a single PAT was attempted.

And these two teams have been at the top of the classification for years. At least one of has been in each of the last five 1B state championships. Both coaches have 10 8-man state titles between them — seven for Nelson, three for Walsh.

But it was the quarterbacks who shined on Friday night, particularly the one leading the Warriors, who returned every starter from the spring and eight total seniors.

Three of Isaak’s touchdowns came on the ground — rushing scores of 15, 52 and 36 yards. Two linked through the air, including a more than 70-yard touchdown pass to Grady Murray. Odessa junior QB Collin Martin threw two touchdowns passes to Davey McMillan in the first half to keep the Tigers close before ACH blew the lid off in the third quarter.

Odessa’s halftime deficit looked to be in jeopardy as the Tigers marched down the field, into the Warriors’ 25, appearing ready to come within striking distance on the first drive after halftime.

Until Reece Isaak jumped a quarterback option run, tipped Martin’s pitch up to himself and ran the ball back until he was chased down at the opposite 46 yard line.

Four plays later, Dane Isaak hit Grady Murray for a touchdown. On the next drive, Reece Isaak lowered the boom and forced a fumble on an Odessa run play. Correia leapt on the ball and recovered and Dane Isaak turned a 36-yard touchdown run on the next play.

All in all, ACH scored three unanswered touchdowns after halftime to build up a 50-14 lead.

“Those kids are studs,” Walsh said.

There may not be a more dominant pair of defensive ends than the two lining up for the Warriors.

As they’ve done all year, the senior duo wreaked havoc in the trenches, slowing an Odessa rush attack which had its top three rushers with 806 yards (Davey McMillan), 708 yards (Daeton Deife) and 226 yards (Anthony Elder) on the ground through five games.

Isaak’s size and force 6-foot-3, 250 pounds and Correia’s speed on the edge forced Odessa to ditch the rush — the very facet of the game it has torched the state with for the last four years.

“We just had no answer for them tonight,” Nelson said.

Their ability to get into the backfield was bolstered by a defensive approach where Isaak and Correia’s tactics were deceptive.

One play they’d go outside the guard, other times they were crashing. A combination of good play-calling and execution allowed the Warriors to keep Odessa off balance all night.

Walsh considers Reece Isaak and Correia to be among the best defensive linemen who have ever come through the program. He also praised John Pierce’s play at nose guard.

“Those kids are studs,” Walsh said. “We hoped over the course of four quarters they would kind of have that effect, and they did.”

Odessa takes to the air

The way ACH send its athletes into the box to stop the run begged Odessa to look downfield.

So with their rushing attack muted, the Tigers took to the care and took shots through the air out of play action.

READ: Farming, family and football: The legacy of 8-man football in small-town Odessa

Martin found some success establishing the pass game when ACH’s defense was daring him to by taking away what Odessa does best.

“I don’t have a lot of 3rd and 15, 4th and 20 plays,” Nelson said. “We’re a run-oriented team and you’re forcing us absolutely to throw, it makes it tough. Our quarterback was back there just getting hammered.”

Warriors taking presumed jump to No. 1 in stride

ACH’s win over Odessa almost ensures it will jump the Tigers for the No. 1 spot in SBLive’s weekly power rankings.

As momentous a win as it was, especially for a senior-heavy group who hadn’t beat Odessa since middle school, the Warriors don’t feel like they’ve arrived anywhere, or accomplished their ultimate goal of a state title.

These teams could meet again — in the state playoffs

When the state playoff seeding committee meets at the end of the regular season to determine the field, there’s a chance these two teams might end up at Nos. 1 and 2.

Both teams are counting on seeing one another again.

“Now we’ve got the bullseye on our chest, and they’re coming for us,” Walsh said. “Hopefully we stay healthy, make the run we want to make and I fully anticipate (Odessa) to be in the hunt.”

Due to the state allocations released by the WIAA in early October, the 1B state playoffs will be a 12-team field, expanding from eight in recent years.

All photos by Carrie Isaak