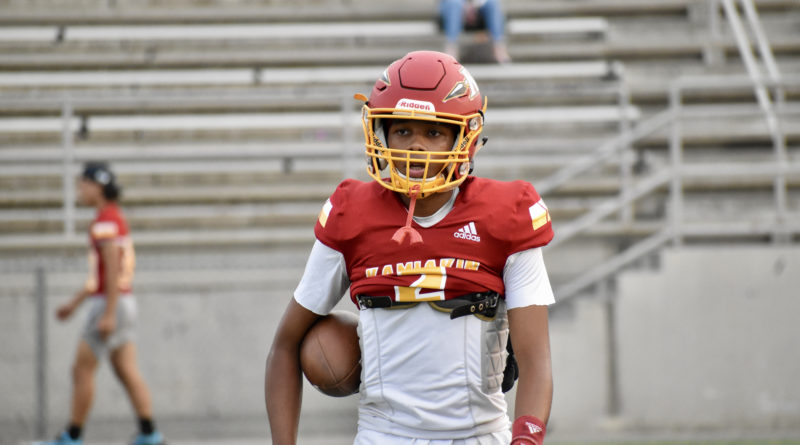 For years since they were little kids, players from both Kennewick and Kamiakin high schools have grown up together on the football field.

“There has to be close to 60 of us who played together (or against each other) in Grid Kids,” said Kamiakin senior Payton Graham. “We’re all friends.”

And on Friday night, some of those friends had to lose, as Kamiakin pulled away in the second half for a 34-20 Mid-Columbia Conference victory at Lampson Stadium.

The win gives the Braves a perfect 6-0 record — both in MCC and overall play.

The difference in Friday’s game was the Kamiakin defense shutting out the Lions in the second half.

Coming out of intermission tied at 20-20, the Braves did a good job adjusting to the Lions’ offensive attack.

“We knew this was going to the be the biggest fight, like a Rocky movie,” said Kamiakin coach Scott Biglin.

And the Braves had to go without four starters in the second half. Gabe Tahir, a wide receiver and defensive back, was limping on the sideline with his right knee packed in ice.

Linebacker/receiver E.J. Hawkins was on crutches. Two other linemen were ejected for throwing punches on separate plays.

Still, the mantra at Kamiakin this season has always been Next Man Up.

Case in point: running backs Charlie Munn and Makram Altahir stepped in for an exhausted Luis Salgado early in the fourth quarter, with Altahir (a sophomore) scoring on a 3-yard run to give the Braves the lead for good at 26-20.

Next case in point: senior Cade Hansen, having never snapped the ball in a competitive game, stepped in at center to keep things moving for Kamiakin.

And Kennewick coach Randy Affholter made it clear after the game that the Braves’ best defense in the second half may have been their offense.

“In the second half, our offense did sputter,” said Affholter. “But Kamiakin’s offense just took control.”

Indeed. The Braves offense had the football for 16 minutes and 46 seconds of the 24 second-half minutes.

“Last spring I was co-Lineman of the Year with (Kennewick’s) Ayden Knapik,” said Tano. “Tonight, I came out with a lot of energy. I felt I had a breakout game.”

And when Kennewick did move the ball, Graham stopped things twice with interceptions.

It was Graham — who is headed to Gonzaga University next year to pitched for the baseball team — who also scored the final touchdown to give Kamiakin the breathing room it needed.

Graham, lined up on the left side, ran a perfect route to the left corner, where quarterback Henry Mercado laid it perfectly into his arms for a 9-yard TD play.

“We’ve been practicing that route all year, but that’s the first time we’ve used it,” said Graham, who finished with 7 catches for 75 yards. “It was just a goal line fade.”

The game was tied three different times, and the lead changed hands three more times, in a game that featured a wild first half.

Salgado scored twice for the Braves in the first half, on a 6-yard run, and a 5-yard TD reception. He would finish the game rushing 26 times for 130 yards.

Kennewick countered with a Dayton Davis TD pass and a 34-yard touchdown scamper; and Myles Mayovsky returned a kickoff 94 yards for a score.

“I’m glad I don’t have to see Myles again,” said Biglin of the Lions senior, a four-year starter.

It’s true. Since Kamiakin is Class 4A and Kennewick is 3A, the two rivals will go their separate ways come postseason.

Meanwhile, Biglin must continue finding new guys to step up when others go down.

“We are so competitive with each other in practice,” he said. “We’re not very nice to each other. Practices are pretty intense.”

Mercado completed passes to eight different receivers. … Tano led Kamiakin with 5 tackles (one for loss) and those three quarterback sacks. Aidan Canada had two tackles, two covers, and recovered the opening kickoff loose ball. … Angel Salgado added 5 tackles, while Kale Crawford had four tackles (one for a loss). …. The Lions had plenty of standouts on defense, led by senior Bronson Childs’ 10 tackles. Simeon Howard added 9 tackles (one for loss), while Mayovsky, at linebacker, had 8 tackles and a pass breakup. …. Kamiakin travels to Pasco next Friday, while Kennewick plays host to Hermiston the same night. The Lions then play at Chiawana, and host Richland the next few Fridays.