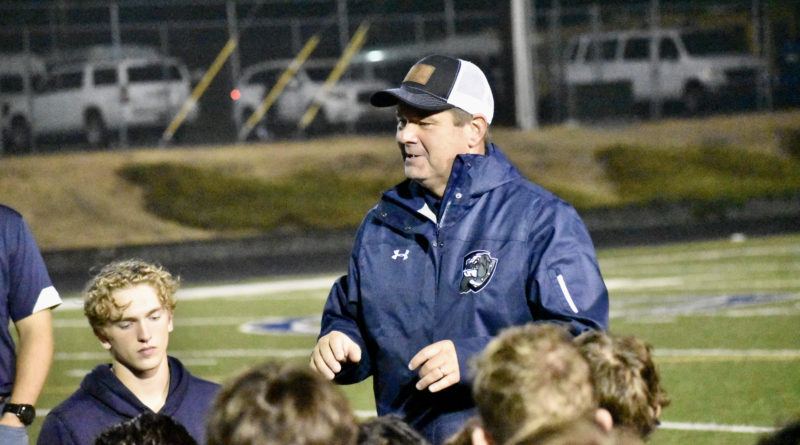 VERADALE, Wash. — And just like that, Gonzaga Prep is once again the class of the Greater Spokane League.

In what was a de facto league title game between the GSL’s top two teams, the Bullpups (5-0) seized control and kept Central Valley (4-2) increasingly out of reach on its senior night Friday, coming away with a 35-7 win that puts them on the fast track to larger ambitions.

As has been the M.O. for G-Prep all fall, everything flowed through Ryan McKenna. The Bullpups’ star quarterback finished with 159 rushing yards on 18 carries and picked up three touchdowns — two rushing and one passing — to lead a statement win over a team that’s still a legitimate postseason contender.

“He’s a great football player, I’m proud of him,” said Prep head coach Dave McKenna of his son. “But he’s got 10 other dudes out there fighting with him, so it’s a team thing and I’m proud of them.”

Running back Matteo Saccomanno added a touchdown in the winning effort, and the third-ranked Bullpups are in the driver’s seat from here on out with a huge crossover matchup looming in Week 10.

In truth, the first two drives of the game were all CV, which was previously unbeaten in GSL play. The Bears forced a three-and-out on Prep’s first drive and stormed down the field on the ensuing possession, culminating in their only touchdown, a short-gain rush from Trevor Gravele set up by a 30-yard bomb from Abshire the play previous.

“Early we had the opportunity, but they put the clamps down defensively on us and we just weren’t as efficient as we have been the last couple of weeks,” CV coach Ryan Butner said.

But after that, drives kept coming up short. The Bullpups spent plenty of time on defense, but the Bears just couldn’t find the end zone. CV quarterback Luke Abshire (19-39, 215 yards, two interceptions)  kept testing Prep’s secondary with deep throws, but a flurry of incompletions and untimely penalties stacked up, along with a pair of drive-stopping sacks that took the air out of hopes of a rally.

It didn’t help that starting center Kadin Sweeney left the game midway through the third, leaving the Bears to put out fires in the pocket against a defense that already didn’t need any help forcing Abshire to scramble.

What could’ve been a momentum-saving CV field goal became disastrous after a high snap created a turnover that led to Prep’s third touchdown of the night, and the Bears never threatened to score again save for Abshire’s efforts.

Both defenses looked stout, but G-Prep made the most out of big plays.

Prep forced three turnovers and sacked Abshire six times in the rout, routinely forcing him out of the pocket and into long incompletions downfield. CV actually held the Bullpups to its lowest point total of the season,

“The defense played well all game,” Gonzaga Prep coach Dave McKenna said. “We gave up a long drive and then some uncharacteristic things. [Defensive Coordinator H.T.] Higgins called a great game and the kids were dialed in.”

The Bears were no slouches on defense either, but huge plays from McKenna nullified any chances for a momentum shift of their own. Prep’s QB broke through and ripped off 43- and 45-yard scores that shifted the complexion of the game permanently.

CV tightened up in the second, holding Prep scoreless until two late touchdowns turned the game into something more lopsided, but even in the third it was too late. Going punch-for-punch with Prep is hard enough, but finding headway against a defense rolling like the Bullpups’ was is an even taller task.

“Our defense looked really good in that second half, keeping us in the game,” Butner said. “We just couldn’t capitalize offensively.”

G-Prep looked energized after an unexpected bye week. What’s next?

Ridgline’s forfeit last week left the Bullpups with a week off they didn’t plan for, but they put it to good use, dealing with nagging injuries and prepping for their biggest game of the fall so far.

The Bullpups have the top 4A seed secured ahead of a Week 10 crossover matchup with a Mid-Columbia Conference opponent, but if you ask Dave McKenna, this win doesn’t change anything about Prep’s approach from here on out.

““We just take one week at a time with these guys, especially with all the things that have surrounded us the last 18 months,” he said. “We want to enjoy every moment we get with these guys.”

Gonzaga Prep hopes to remain undefeated next Friday against Lewis & Clark, with CV set for a non-conference matchup on the road against 2A Cheney that same day.