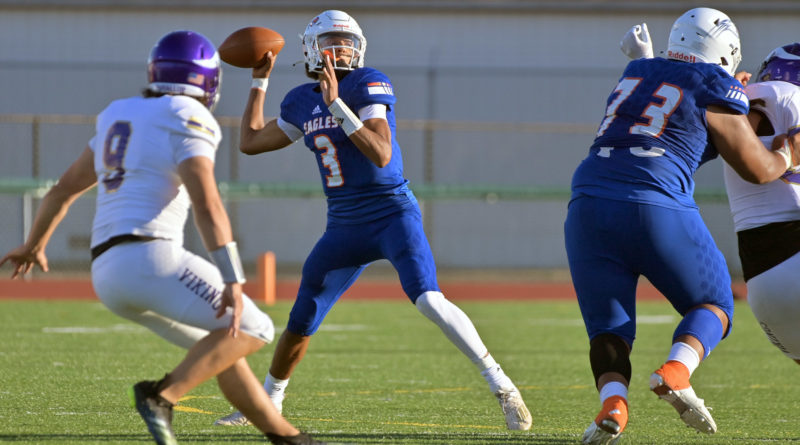 Everyone who has been around Joshua Wood – or played football with hm at Graham-Kapowsin High School – knows the teenager has flair and style.

And he decided to incorporate that this week in revealing his college choice at quarterback – the Eastern Washington Eagles.

On his unofficial visit to Cheney last weekend, he had gathered so much information and comfort that he was leaning toward making the decision soon. So, he asked some of the current players – how should he break the news to Eagles’ coach Aaron Best?

“He was actually walking the dog,” Wood said. “I caught him off guard a little bit, but he kind of knew.”

When you are the top in-state quarterback prospect in the class of 2022 – one who is at the helm of the No. 1 team in the state – you can call anytime.

The reigning Northwest 9 Showcase senior-class champion has backed up his strong sprint debut with wildly-efficient numbers this fall: Through five games, he has completed 57 of 84 passes (67.9 percent completion rate) for 812 yards and 14 touchdowns, adding 105 rushing yards on 11 carries with three more scores.

And not only does he have a perfect record in his 10 starts (10-0) over two seasons, he has an unblemished track record for making the correct cool-customer decisions for this Graham-Kapowsin offense on the fly.

“Eastern is a great fit for Josh,” Graham-Kapowsin coach Eric Kurle said. “They product great quarterbacks, and they will use his talents to the fullest.”

EWU is very familiar to Wood. His brother, Jordan Laurencio, played running back for the Eagles until 2017.

“They’ve always been on my radar,” Wood said.

During the offseason, EWU was one of three Big Sky Conference programs to offer Wood – and has kept showing constant interest.

“They just showed so much love and everything,” Wood said. “I got a text almost every day, or a call every 2-3 days. They kept building a relationship throughout the process.”

Because Wood did not make his varsity debut until last spring, some in his corner advised him to wait it out to see what bigger-school offers would come his way.

“I had a conversation with me, my mom and dad about it, and after the (unofficial) visit, I felt this was the place I could call home,” Wood said.

And now the dual-threat standout goes to a program that has seen its past three multi-year starters at quarterback – Vernon Adams Jr., Gage Gubrud and Eric Barriere – all post two or more seasons of averaging at least 350 yards of total offense,

“I have a relationship with all of them,” Wood said. “And seeing what offense they run and what they do with their quarterbacks … I knew this was the best choice for me.”

As for trying to play basketball at EWU – he is a top-rated point guard, too – Wood said he has not closed the door on that option, but admitted football was the higher priority.