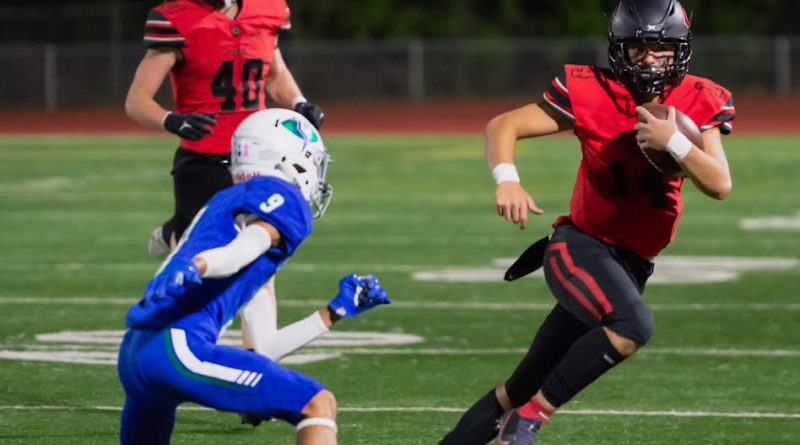 After an 0-4 start against Oregon squads, the Papermakers have won their past two games, easily dispatching Mountain View, 38-7, in a 4A-vs.-3A Greater St. Helens League game Thursday night at McKenzie Stadium.

The Papermakers (2-4), the last team to win a Class 4A title, have won 20 of their past 21 games against in-state squads. And about that 0-4 start this season? Well, that’s a distant memory.

“We’re just hungry and we like getting better,” Camas first-year coach Jack Hathaway said. “This is what it looks like when guys are hungry and they work hard.”

Taylor Ioane threw for a pair of touchdowns and ran for one as he amassed 235 offensive yards in the dominating Papermakers’ effort.

Mountain View (4-2) quarterback Mitch Johnson threw an interception to Bradley Prouse on the opening possession, and the woes continued throughout the night. The Thunder aim to get back on track on the road against Prairie next week.

Camas tests itself in non-league action once more — an Oct. 15 heavyweight bout against 2A champion Tumwater — before league games against Skyview and Union decide the 4A GSHL crown.

Here are four observations from the Camas-Mountain View game:

Anybody who has seen the Papermakers play this year already knew that. Camas flies around on the defensive side of the ball. Even when the results weren’t showing it, the Papermakers never flinched.

“Belief was never a question,” Camas defensive lineman Jack Hanley said. “We were playing these ranked teams in Oregon, and it was almost like a breath of fresh air coming back here and showing just what our defense can do.””

Prouse had an interception on Mountain View’s opening drive, and Hanley recovered a fumble on the Thunder’s second possession to set the tone for the game.

TAYLOR IOANE SETTLING IN AT QUARTERBACK

The junior quarterback didn’t get a lot of football action in a COVID-shortened sophomore season. So there’s good reason why the 5-foot-11, 175-pound signal caller has taken some time to figure things out.

Thursday was his most complete performance of the year. He was calm under center and operated a smooth offense, throwing for 186 yards on 15-of-18 passing and touchdown throws to Mark Thorkelson and Brock Thornburg. He also ran for a 20-yard score and had 49 yards on six carries.

His 10-play, 99-yard touchdown drive with two minutes remaining in the first half was especially exceptional.

“We’ve seen it in practice and we’ve seen it in games, but not always the whole game,” Hathaway said of his quarterback. “There’s still some things he needs to work on, but … he’s making some good strides.”

Mountain View is a good football team, and likely favorite to win the 3A GSHL. And yet, Camas just took it to the Thunder from the opening whistle.

It’s easy to overlook any team that starts 0-4, but those losses came to Oregon 6A powers Central Catholic, Clackamas, Jesuit and West Linn.

Now, the Papermakers face a Tumwater team that is widely considered among the best in the state regardless of classification.

If they can make it through a tough 4A GSHL, they will be playoff ready.

JACOB MARTIN IS THE REAL DEAL

There weren’t a ton of positives to take away from Mountain View’s night, but Jacob Martin continues to impress anybody who sees him.

The 6-foot-2 junior is going to be a hot name in recruiting circles sooner than later. He hauled in a 30-yard touchdown pass from Mitch Johnson in the fourth quarter, and had a second-quarter interception.

He also punts and returns punts for the team, showcasing his athletic prowess every chance he gets.