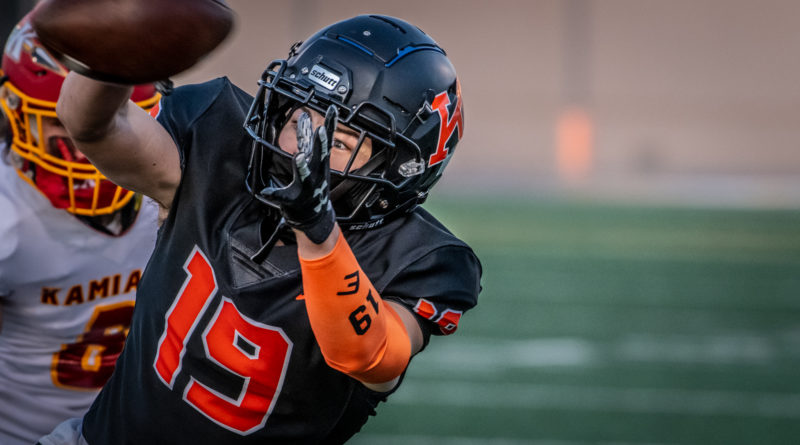 Does the Mid-Columbia Conference championship get decided in the first full weekend of October? Are these the two best teams in the Metro League? Who is the top dog in the 4A Greater Spokane League?

Those answers are coming Friday night.

Here is a quick recap of last week’s highlights, and a look forward to Week 6 storylines and games to follow (featured photo by Scott Butner):

THREE THINGS WORTH REVISITING FROM WEEK 5

After the lights went out … in Leavenworth

Here’s a craziest-game-of-the-year candidate – Chelan’s 55-54 win over Cascade of Leavenworth. It featured extreme momentum swings (and 1,000 yards of total offense), two onside-kick recoveries, a streaker, a stadium-lights shutdown (in the final seconds) – and backup kicker Jahir Garduno converting the game-winning PAT boot. “Anyone who watches (TV series) ‘All-American’ and knows how unrealistic it is – this game was one of those things,” Chelan coach Travis Domser said.

No team has sent bigger shockwaves around the state than No. 5 Marysville-Pilchuck, which has posted blowout wins over ranked Glacier Peak (49-14) and Ferndale (49-15) last week to seize control of the 3A Wesco. “We’ve played really well – and really clean in terms of penalties and turnovers,” Tomahawks coach Brandon Carson said. The defensive line, led by Nate Elwood, Blake Jones and Brayden Rogers, has given up 50 rushing yards on 37 carries in those two wins.

Bellarmine Prep has survived two 4A SPSL thrillers against playoff hopefuls – the last one a 23-20 win at Emerald Ridge last Thursday. Now, the unbeaten Lions – heavy underdogs – will play at No. 1 Graham-Kapowsin on Friday, led by Tristan Warner. They were also the first opponent Eagles’ quarterback Joshua Wood faced last spring. “No question, we are underdogs – and they are No. 1 in the state,” Lions coach Brian Jensen said. “It is David and Goliath here. Who knows?”

What we learned in Week 5: SBLive Washington podcast

In 2019, rebooted Lincoln of Seattle played a JV schedule with 27 players. Last spring, the Lynx won two varsity games in the Metro League. And this fall, the newer kids on the block – with up to 75 guys – are 4-0 in the league’s third division – with convincing wins over Ingraham (42-6), Chief Sealth (42-0) and Cleveland (45-0). They play Lindbergh on Friday. “We get on the bus, and they know it is a business trip – and that we are going to do things our way,” Lynx coach Aaron Hart said.

It’s been a topsy-turvy first month for Lakewood, the No. 2 preseason team in Class 2A. The Cougars are 2-3, with loses to Northwest Conference foes Sedro-Woolley and Burlington-Edison. With only two state berths from its district, Lakewood has to likely win out – starting with a game Friday at No. 3 Lynden. “We are going to need some help,” Cougars coach Dan Teeter said. “But we feel we can beat any team in the conference – and that every team is also dangerous.”

Biggest 1B game of regular season happening in Coulee City

Brandon Walsh can feel a different level of excitement around school – and the Almira/Coulee-Hartline program this week as the No. 2 Warriors welcome reigning two-time defending Class 1B champion and No. 1 Odessa to town Friday night. Both teams like to run the football, just out of different formations (ACH is spread; Odessa is power-I). “I have a good senior group that has never beaten Odessa,” Walsh said. “We are hoping we can get it done this year.”

Skinny: Contrast of styles – Bullpups will run while the Bears air it out – make this 4A Greater Spokane League championship matchup very intriguing, especially behind two great quarterbacks.

Skinny: Expect physical play in the trenches, but winner could be determined by who shines brightest out of offensive backfield – Kennewick RB Myles Mayovsky or Kamiakin QB Henry Mercado.

Skinny: One of the most intriguing matchups of the fall comes this week – the Irish run game, led by RB Jason Brown, against Eastside Catholic’s talented linebacking trio.