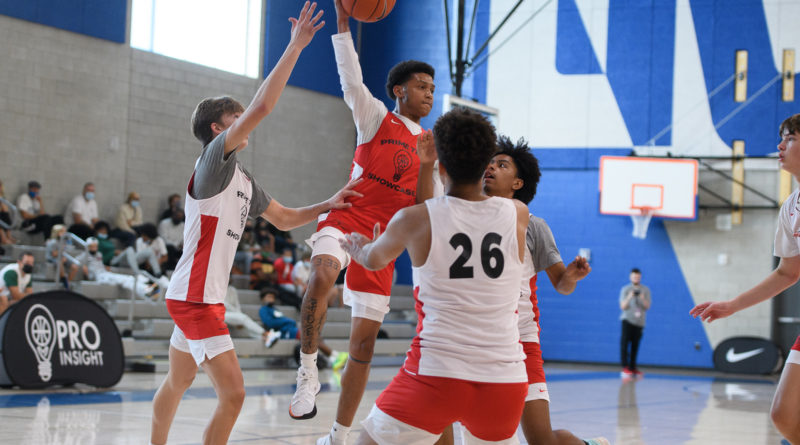 GRESHAM, Ore. — If you passed through Gresham High School’s gymnasium Saturday and didn’t know any better, you might have mistook the gym full of tall, lanky athletes undergoing physical measurements, Nike product testing and 5-on-5 scrimmages played above the rim for some sort of professional combine.

In essence, it’s not far off. At least that’s the design organizers were aiming for.

The fifth annual PrimeTime 40 Showcase powered by Pro Insight hosted 40 of the region’s top boys basketball talent in the Portland suburb, many of them Division I prospects. The event did not take place in 2020 because of COVID-19, making Saturday the first time the event had been held in two years.

It began as an event built around then-highly touted Oregon prep prospect Payton Pritchard in 2015, in hopes his budding stardom would shine a light on Oregon’s under-recruited, overlooked talent.

Six years later, Pritchard is a second-year backup point guard on the Boston Celtics and still helping the event in an effort to show appreciation and stay tapped into the Portland basketball scene, PT40 organizer and director of PrimeTime Reggie Walker said.

MORE: Here’s who was invited to the PrimeTime 40 Showcase

And the reach of the PT40, which does not charge players an entrance fee, has expanded to some of the top uncommitted freshmen, sophomores, juniors and seniors in Washington and Idaho as well as one apiece from Hawaii and Utah.

Pritchard’s charity arm — the Payton Pritchard Foundation — footed the bill for the event he once helped put on the map, as the NBA guard keeps close tabs on up-and-coming talent in the Portland area.

The field of 41 did not have as many present day Division I prospects as years past, which have featured the likes of Nolan Hickman, Kaden Perry and Ben Gregg (Gonzaga), Nathan Bittle (Oregon) and Pritchard. But there were D-I prospects aplenty, and a lot of promising underclassmen.

Coaches in attendance hailed from Division II or lower. Because Saturday took place outside of a D-I recruiting window, no D-I coaches attended in official capacity, though it was live streamed.

Wasatch Academy (Utah) senior Koren Johnson, a Seattle native and transfer from Garfield, was the most highly touted prospect at the event, and he played like the most refined player in the building.

Not far behind from the 2023 class was 6-7 wing Jaylin Stewart, who looked noticeably taller and bulkier than he was while starting for Brandon Roy and WIAA 3A state champion Garfield as a freshman.

And the invitees from the 2024 and 2025 classes — underclassmen — flashed a lot of promise.

“Ultimately our goal is to make sure the players in our area have as much opportunity as they can to earn scholarships or reach their goals,” Walker said. “If we can elevate that percentage, or make it become more of a tangible goal, that’s what we want to do.”

It felt like when Johnson wanted to, the senior’s top gear was higher than everyone else’s in the building.

Johnson is a Rivals four-star and borderline Top 100 prospect in 2022 who has narrowed his college pick between Washington, San Diego State and Arizona.

After helping Garfield (Wash.) win a 3A state title in 2020 and averaging 28 points, five rebounds and four assists in his shortened junior season, he transferred to nationally-competitive Wasatch Academy after his junior season in hopes of shining under a bigger spotlight. The Mt. Pleasant, Utah, based boarding school joined the newly formed National Interscholastic basketball Conference with powers such as Oak Hill, Montverde and IMG Academy, among others.

He wanted to fly to Portland to play in the PT40 and prove he’s the event’s most polished prospect.

“Kind of wanted to show Seattle and Portland what I’ve been working on in general, just come back and put on for the Pacific Northwest,” Johnson said. “I feel like I had a good day today.”

He’ll be making his college decision on his birthday at the end of October, he told SBLive on Saturday.

Johnson’s dominance also served as a measuring stick for how far Hicks has come since attending the event as a freshman.

During the full-court scrimmage portion, Johnson and Hicks shared a backcourt. The Seattle Rotary teammates scored on all three levels, threw dunks with ease and could seemingly take over games when they chose.

For Hicks, it was a show of improvement over two years from high-scoring freshman into a bonafide Pac-12 prospect.

He was invited to the previous PT40 in 2019. The high-volume scorer led Timberline immediately as a freshman, and he has matured and developed considerably since. But at the PT40, the stage might have been bigger than he was prepared for.

“We had him as a freshman, he was the youngest kid at our camp and he wasn’t ready for it,” Walker said. “He was just overmatched. The fact that he was out here today, being an alpha, he showed out. You can’t tell me he wasn’t one the five best guys here.”

The big names from the Pacific Northwest in the 2021 class are off playing in college. So, who’s up next?

All said, 17 underclassmen filled the field of 40 — eight freshmen — and they showed just how bright the next few years in the region could be, going up against players as many as three years their senior.

6-foot-3 Barlow (Ore.) freshman Jalen Atkins showed poise, physical maturity beyond his age and an ability to score in a variety of ways.

Atkins played with Pritchard in the Portland ProAm by Pritchard’s request over the summer, and he was on the floor when the former West Linn (Ore.) great scored 92 points in a game.

Garfield freshman Legend Smiley, who might be the top 2025 prospect in Washington, showed in moments why so many hold the sharpshooting 6-3 guard in as high of regard as his father, former USC guard Roydell Smiley, who played for Garfield with Roy in the early 2000s.

“I feel confident in my game and I’m just here to see what I can do better,” said Smiley, who holds an offer from San Francisco. “I know my game is complete, but it could be better than what it is. So, when I go back to Seattle, I want to improve on what I did here.”

Freshman JJ Mandaquit flew in from Honolulu, Hawaii, to compete against a crop of talent he isn’t used to seeing and that he hopes will prepare him for Iolani High School on the big island.

The 6-foot-1 guard is the first Hawaii prospect to compete in the PT40, and he was invited through a connection.

Mandaquit’s tight handle and pressure defense stood out throughout the day. His family back home watched the event live stream closely and texted him support whenever he’d make a productive play.

Guarding players such as Johnson gave him a taste of what’s to come in high school.

“I got to see where I’m at,” Mandaquin said. “I felt like it was a successful weekend. I know what I’ve got to work on.”

One of the livelier moments from the full-court scrimmages came in one of the last games of the afternoon when West Seattle guard Isaiah Watts threw down a dunk over Hicks, sending the gym into what might have been the day’s loudest cheer.

“I don’t know why he jumped, but I told him somebody’s getting caught today,” Watts said. “I don’t think he had it in me, because it was all vertical, I just turned around and dunked it. It’s special, because that’s a big-time guy.”

It was a highlight moment for the skilled shooting guard, who holds an offer from Eastern Washington. He couldn’t help but smile recounting it afterward.

Asked if any of the 40 prospects’ skillset surprised him, Hicks didn’t hesitate: Watts’.

“He got me, he got me,” Hicks, who made a genuine attempt to slide into the paint and block the dunk, said, smiling. “We’ll see it somewhere.”

The next play down the floor, Hicks flew through the lane and threw down a put-back dunk, though not over Watts.

The 6-4 senior stretch forward from southern Oregon was the most physically imposing player on the floor, swatting shot attempts into the benches and recording several rim-rocking dunks.

Malachi Seely-Roberts was a flamethrower from deep

2023 forwards Moroni and Malachi Seely-Roberts might not be identical twins, but they mirror each other in how well they can score.

On Saturday, the 6-8 Malachi was dangerous from deep, sprinkling contested and open 3s throughout the scrimmage portion of the showcase.

After leading Yamhill-Carlton (Ore.) to a 3A state title in June, the Seely-Roberts twins transferred to 6A Lincoln, following their mom, Heather Seely-Roberts, who was hired as the Cardinals’ head coach — the first female head boys basketball coach in Oregon 6A history.

The two best represented schools were Roosevelt (Ore.) and Central Catholic (Ore.) with three attendees apiece. The Roughriders, who are set to be loaded with returning standouts, sent sophomore guard Terrence Hill (6-1) and Utrillo Morris (5-8), as well as 6-5 senior forward Donatello Tupper.

Hill, who has an offer from Portland, and Johnson both shined.