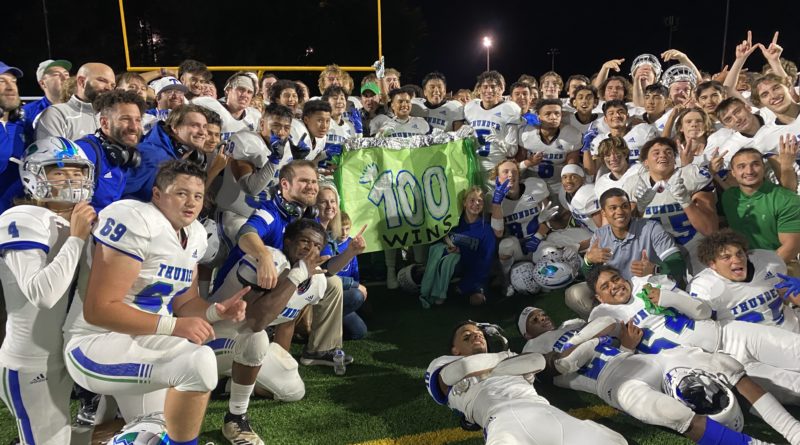 But Smith, who beat the Thunder on a last-minute field goal at home in 2019 as a sophomore, pulled the 31-yard attempt wide left and Mountain View held on to win 20-17 on Friday night at Schroeder Field.

“This one, I guess, is payback,” said Mathieson, Mountain View’s head coach.

With the win, the Thunder (4-1, 2-0 3A Greater St. Helens League) clear maybe its largest league hurdle and jump into first place of a 3A GSHL that will vie for just two postseason bids.

It also secured Mathieson his 100th career win as a head coach.

The Thunder led 20-10 at halftime, but Kelso’s defense dominated the second half, keeping Mountain View out of the end zone.

Senior wideout Colby Cooper stepped under center and ran 14 yards for a touchdown to bring Kelso (4-1, 1-1 3A GSHL) within three heading into the fourth.

“They’re who we thought they were, and the good news is we think we’re a good team to,” Mathieson said.

Added Mountain View corner Kyle Chen: “We stuck together as a team all week, through the rain, through the mud. We knew it was going to be a long 48 minutes and we got it done.”

The Hilanders big, physical defense had only given up one defensive touchdown through four games, and it came late in a comfortable Week 4 win over Prairie.

After giving up nearly 220 yards of offense and 20 points to the Thunder in the first half, the Kelso defense on display in the first four weeks of the season showed up after halftime, forcing turnovers and keeping Mountain View out of the endzone.

So, how exactly did Amrine and his staff’s conjure the table-turning defensive performance at halftime?

“Message was to finish, tackle and not to give them any easy yards,” Hilanders senior quarterback/linebacker Hunter Letteer said.  “Coach made it clear we were the tougher, better team and we showed it.”

The Hilanders needed a mentality switch to go with its schematic adjustments.

“They went man coverage and moved some guys closer to the box and started pressuring us,” Mathieson said.

They turned the Thunder over, too — twice in the third quarter — and didn’t just keep the Thunder out of the end zone, but also didn’t let them move the ball.

Kelso DB Zeke Smith picked off Johnson on the first possession of the second half, then Colby Cooper forced a Mountain View fumble at the end of a 4th and 2 conversion.

And the Hilanders’ two fourth quarter stops kept them in the game, first backing Mountain View up and forcing it to punt on 4th and 27, followed by two more defensive stands in the final four minutes that set up Kelso’s chance to win or send the game to OT.

“We won the second half everywhere but the scoreboard,” Amrine said.

Before Kelso’s defense took over after halftime, the Thunder strung one long, clock-chewing drive after another to build up a 20-10 first half lead.

Mitch Johnson ran in a one-yard touchdown on the Thunder’s first possession of the game. After Kelso answered with Hunter Letteer hitting Zeke Smith in the corner of the end zone from five yards out, Johnson hit sophomore tight end Aiden Johnson for a 44-yard touchdown, giving the Thunder a 13-7 lead.

Then Mason Smith hit a 23-yard field goal to pull Kelso within three at 13-10, which gave the Thunder the ball back with 2:37.

Mountain View proceeded to drive the length of the field, setting up Johnson’s one-yard touchdown run with a second left to take a 20-10 halftime lead.

“We were at the one-yard line, you’re in Kelso, big game, why kick a field goal there? Let’s go for it,” Mathieson said. “Mitch did a nice job managing there.”

The Thunder are sure glad they went for seven with a second left, instead of kicking a field goal. The score gave the Thunder a margin that narrowly withstood Kelso’s second half rally.

Mathieson can rattle off specific details of each of his 47 losses in his head coaching career with precise details.

“I’m much more concerned about losing than winning,” he said. “There are like three wins over the last 15 years that stand out.”

So as uncomfortable as he says he is with winning, he took Friday’s achievement as an opportunity to celebrate his program.

“When it happens, you have to finds the comfort in it, because you need to recognize the people who have been part of the journey, that’s what you’re trying to celebrate, the journey over time,” Mathieson said Thursday. “I’ve been fortunate enough to be in a place long enough to where you can have the success you have.”

The team gathered in the end zone for Mathieson’s postgame dispatch, and as he delivered an impassioned, fiery address in the minutes following the final horn, his assistant coaches snuck crept up behind him with a green poster celebrating his 100th win.

Mountain View-Kelso has rivalry feel to it

There was an energy buzzing at Schroeder Field.

Beneath the mutual respect the head coaches trade is a will to send the other home a loser. It’s the same will the bore out a chippy final seconds of the contest Friday, where players had to be momentarily separated on the field after a Hilander personal foul.

“I love playing at Kelso, love playing in the one-horse town,” Mathieson said. “It’s kind of fun going into a place where nobody likes you, everyone wants to see you get pummeled. Older people walked in their letterman’s jackets. That’s fun, and you don’t always have that in suburbia where everyone’s sharing stadiums.”

The Thunder have been the longtime gatekeepers standing in the way of a 3A Greater St. Helens League title, having won four of the last five, and the last time these teams played to a full capacity stadium was in 2019, when Mason Smith won Kelso the game with a go-ahead 25-yard field goal in the final seconds.

Longtime Kelso coach Pat Hymes even paid a visit to the Hilanders at the end of Thursday’s practice. He gave a speech detailing the pride the program takes in playing home rivalry games, and how the strong teams from Vancouver typically fit the bill of a rival, even if they’re not a crosstown foe. Hymes went 103-64 in 17 years as the program’s head coach and inducted into the Washington State Football Coaches Hall of Fame in 2019.

The message wasn’t lost on the Hilanders after the bitter loss. Tears and frustration permeated the home sideline after the final horn.