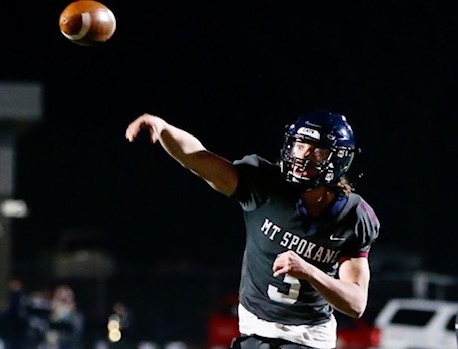 MEAD, Wash. — Mitigating circumstances are all the rage these days, but Mt. Spokane had no need for them Friday evening against Lewis and Clark.

Shorthanded and without their head coach due to a COVID outbreak on the team, the Wildcats (3-1) still controlled the game from the onset, coasting to a 27-0 win at Union Stadium over the Tigers (2-3), who had more than twice as many players available on the sidelines.

“I think the kids really bought into the fact that there was some adversity and we always talk about overcoming adversity,” said offensive coordinator Danny Figueroa, who took over on-field coaching duties this week from head coach Terry Cloer. “They met that head-on when they could’ve gone into it saying ‘Woe is me’  when we had a lot of our guys gone. And they just kind of bumped it up and he said, ‘Hey, look, we have to keep playing because if we don’t play, then we’re going to forfeit the game.’”

The Wildcats’ starters remained largely intact, however, and it showed from the first drive, a four-minute affair that brought them 57 yards downfield at a rapid pace after a 37-yard kickoff return from receiver Tyler Alm.

LC struggled to pressure the Wildcats’ line, giving senior quarterback Kellen Flanigan and his receivers plenty of time to hunt while converting on short-yardage opportunities near effortlessly.

Flanigan completed 14 of 23 passes for 210 yards to go with passing and rushing touchdowns, and Alm (151 all-purpose yards and a rushing TD) and deep threat Aiden Prado (106 yards on three receptions, two TDs) found plenty of room as his go-to targets.

The Tigers got 196 of their 209 total yards from Charles Northern and Gentz Hilburn, all on rushes. LC only attempted four passes in total, going without a single completion all night.

“Our game plan was stop the run, and then man behind it,” Figueroa said. “And they did a great job when they tried to throw it. We had guys in the right spot.”

They were down to fewer than 25 players against an LC squad that had upwards of 50.

They were missing Cloer and starting wideout Jordan Sands due to COVID protocols.

The Wildcats didn’t look anything like circumstantial underdogs. They were opportunistic on offense, averaging 7.4 yards per play en route to a 390-yard night, picked up 22 first downs to LC’s eight and converted on seven of nine third downs.

Mt. Spokane’s defense bent but didn’t break against an LC offense that didn’t complete a single pass on just four attempts, culminating with a goal-to-go stop in the fourth to preserve the shutout — the only time all game that the Tigers cracked the opposing 20-yard line.

“What was fantastic was that our coaches that were quarantined were coaching from home,” Figueroa said. “We had zoom meetings three days this week and  they were going over film with them. They did their game plan from there, and really all we did thee, but we just implemented them on the field. Our guys who are gone, our head coach, he did our defensive game plan like he always does. Our other secondary coach met with the secondary guys on zoom just to do some stuff together.

“So they took it upon themselves to really buy into the game plan, practice well, and really commit to each other.”

Statement win for the Wildcats

After losing to No. 16 Central Valley (3-0) last week by just two points, Mt. Spokane was looking for momentum. A 27-0 shutout with just 24 players will do plenty to inspire confidence, especially considering the aforementioned circumstances.

“Before we quarantined on Monday, we preached that this was going to be our week to get better,” Figueroa said. “And even when those guys were gone, the guys who were left continued to continue to get better … And we use that as a positive instead of kind of focusing on what almost happened, you know?”

Figueroa said Alm, who led the Wildcats in rushing and added a 37-yard kick return, is still working back into the swing of things after a calf injury kept him out for the first two weeks of the season.

“He’s getting back to full strength,” Figueroa said. “He was about 85% last week against CV. He’s a little closer to about 95, 96% now. I think he’s on his way back and he makes us a lot better, because we can run at a ton when he’s in there and he really hits those holes up inside really hard.”

Lewis and Clark had opportunities for game-changing plays, but they slipped out of their hands — literally.

Twice in the first half, the Tigers had chances to swing momentum before costly drops evaporated them completely.

In LC’s first drive, Northern broke through the Wildcats’ secondary on a QB rush and reached the six-yard line before a forced fumble and Mt. Spokane recovery nullified the possession.

Two drives later with the Wildcats up 13-0, DB Tommy Mickelson would’ve been bound for the end zone if he had held onto an intercepted pass from Flanigan, but another drop kept Mt. Spokane in control. LC wouldn’t threaten again until their goal-line stand late in the fourth.

“Mt. Spokane played inspired and Coach Figueira filled in tonight for coach Cloer and had his team ready,” said LC head coach Joe Ireland. “They are a good football team. The Tigers must improve, we have a tough opponent next week vs. U-High.”