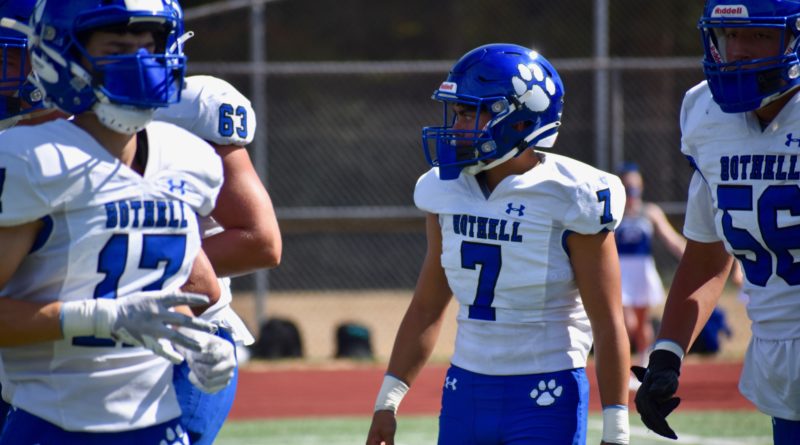 SNOQUALMIE – Bryce Kooy’s biggest play of the night was his last. And it was a final-minute game winner.

Kooy broke through the line and raced 22 yards for the game-winning touchdown to give fifth-ranked Bothell a hard-fought 16-10 victory over host No. 10 Mount Si on Friday night.

“My quarterback was doing a great job making the right reads,” Kooy said. “Finally, a gap opened up and my line pushed them out and it was wide open. Just amazing.”

Kooy’s run came with 1 minute, 6 seconds left on the clock and paid off am eight-play, 48-yard drive for the Cougars. He finished game with 112 yards rushing on 24 attempts, with only three going for 10 yards or more.

Here are three observations from the Bothell-Mount Si game:

Kooy’s touchdown run staved off a potential third overtime game for the Wildcats, who had won their past two games – against Post Falls, Idaho, and Skyline – in extra time. This one appeared destined for the same fate – until Bothell’s final drive.

And the Cougars needed a close call of their own to make Kooy’s run possible.

Lacio’s pass faded low, forcing Percival to his knees just beyond the first-down marker. The senior wide receiver reached out with both palms up, knuckles almost on the turf and pulled the ball into his chest at the Wildcats’ 24 to earn four new downs with 2:11 to go.

Two plays later, Kooy was in the end zone – and Bothell had its only lead of the game.

“I had a little out-route,” Percival said. “It was a little underthrown, but I knew I had to make the play for my team, so I got my hands under there and made the play.”

THE WILDCATS ARE IMPROVING

The two overtime wins improved Mount Si to 3-1 after a thorough defeat, 41-20, at home to 3A Yelm during Week 2. Against the Cougars, there weren’t a ton of opportunities.

But the Wildcats did score on each of their initial possessions in the first and second halves. Both put them in front.

After forcing a Bothell punt on the game’s first possession, Mount Si quickly drove 66 yards in seven plays. The Wildcats took the initial lead, 7-0, when Liam Christensen hauled in a 27-yard touchdown pass from Avery Walker as he fell to the ground with 6:33 to go in the first quarter.

Lacio tied it at 7-7 with 8:45 to go in the second quarter and the game went to the half at that score.

Getting the ball to start the third quarter, Mount Si drove to the Bothell 26-yard line before settling for Cooper Britton’s 43-yard field goal and a 10-7 lead with 9:17 remaining in the quarter.

“I’m old enough to know, we just want to be playing well at the end of the season,” Mount Si coach Charlie Kinnune said. “We’ve had seasons where we were 5-4 and made the playoffs – and won.”

Bothell improved to 5-0 overall, and is still unbeaten in the 4A KingCo as well.

“That was a close one,” Bothell coach Tom Bainter said. “We had a couple of close calls that went our way. I love those guys over there. They are great friends. And that was a great football game. It’s too bad somebody had to not win that game.”

Despite the success on the scoreboard, Bainter sees the bigger picture.

“We dropped balls, we made mistakes,” Bainter said. “And it’s our seniors and our best players who are making mistakes. Those are things that we can’t have happen and we have to fix.”

The Cougars, in part, kept this one close by limiting chances. Bothell’s possessions ate up clock while Mount Si had six drives of five plays or fewer, including four that were three-and-out situations.

“I think that’s kind of the football team we have to be,” Bainter said.

Even the game’s final possession, with Mount Si trying to drive the field in the final minute, was quick. Walker completed two passes to get the Wildcats to their own 45 as the clock ran inside 30 seconds. But offensive penalties on the next two plays pushed them back to their own 25-yard – and they couldn’t recover.

“We had plays that we could make and we didn’t,” Bainter said. “We feel like we should hurry up and get on the bus and get out of here (with the win).”