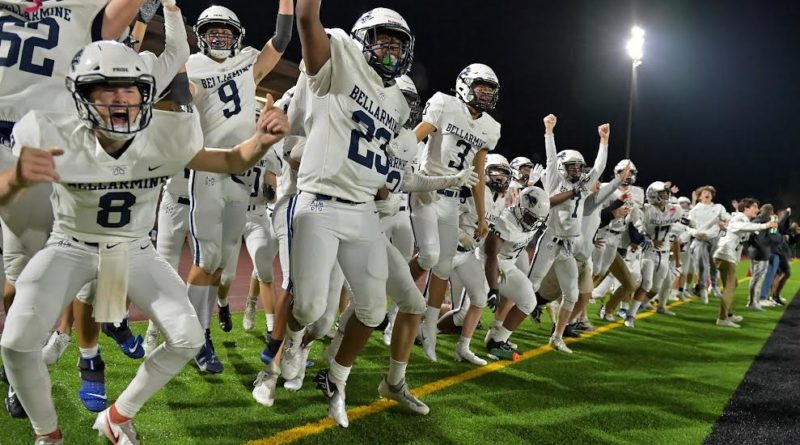 PUYALLUP – This fall, Bellarmine Prep has found a knack for pulling close games out in the final minute.

Trailing for most of the first three quarters, the Lions rallied for a 23-20 victory over Emerald Ridge on Thursday night at Sparks Stadium.

At one point, Bellarmine Prep trailed 14-0 midway through the second quarter. But the Lions fought back to tie it at 20-20 on Tristan Warner’s 14-yard touchdown scamper on the first play of the fourth quarter.

And in the closing seconds, the Lions blew up Emerald Ridge’s fake-punt pass – allowing kicker Max Walker a chance at a game-winning 25-yard field goal on the final play, which he converted.

“It was crazy,” Warner said. “I always got to trust Max.”

Bellarmine Prep (4-0) travels to top-ranked Graham-Kapowsin in a matchup of 4A SPSL unbeaten teams next week.

Here are four observations from the Bellarmine Prep-Emerald Ridge game:

THE GAME RESULT CAME DOWN TO A GRAVE ‘MISCOMMUNICATION’

As both teams traded big plays – and critical mistakes – for 471/2 minutes, this game appeared headed to overtime.

After Schakel was sacked on third down with 22 seconds remaining, Emerald Ridge lined up to punt the football away – and to live another day.

But then the unexplainable happened – the punt snap went to upback in formation, who threw out to a wide-open Sean Tutty in the left flat, but well short of the first down.

Emerald Ridge was called for a penalty, giving the Lions possession at the Jaguars’ 9 with 16 seconds to go – setting up Walker’s game-winning kick.

After the game, Jaguars coach Adam Schakel explained there was a “miscommunication in our calls.”

“It wasn’t intentional, but it happened,” Schakel said.

The root of the miscommunication came on the heels of a near-fake punt call that was discussed on fourth and 2 near midfield late in the third quarter.

“It was fresh in our minds,” Schakel said.

“That is not on the kids. That is on the coaches to fix that.”

The amazing thing about Bellarmine Prep’s 4-0 start is top running back Gage Hicks (foot) and wide receiver Tariq May (foot) have not played a snap this season as they recover from injuries.

The one thing the Lions do have is depth at quarterback. So, coach Brian Jensen moved Warner – the team’s opening-day signal caller – to running back, and has been starting Payton Faker at quarterback.

The switch has worked – Warner was easily the Lions’ most effective offensive threat Thursday, rushing for 140 yards on 31 carries, with touchdown scampers of 3 and 14 yards.

But 30-plus carries for a guy who has been conditioned to pass the ball more than run with it?

“He is a strong, fit young man,” Jensen said. “That (workload) doesn’t bother him. He gets better as he goes.”

Warner said it wasn’t that easy to bounce back from a heavy workload.

The last time Bellarmine Prep saw Jake Schakel, the Emerald Ridge was making his first career start as a ninth grader last spring – throwing a game-winning touchdown in the final seconds to win on this same field.

For the most part Thursday, Schakel was pretty good. He completed 22 of 31 passes for 204 yards and a pair of touchdowns. But he also tossed three interceptions.

Jake Schakel led the Jaguars 80 yards on seven plays to open the second half, capping the march with a 15-yard touchdown strike to University of Washington commit Denzel Boston to extend the lead to 20-10.

In fact, the sophomore hit on 11 of his first 12 passes of the final half, and had Emerald Ridge in position to go win the ballgame at the Lions’ 28 when he threw a floater to the left sideline that was picked off by Bellarmine Prep’s Alex Quintanilla with 1:14 remaining.

“We made some mistakes,” Adam Schakel said. “But our goals are there still.”

Since the 4A SPSL gets six postseason berths, the top four in the league get home games in the round of 32.

And now with wins over Olympia and Emerald Ridge, Bellarmine Prep appears to be no worse than the No. 4 seed – and has a chance to move up further with remaining games against preseason league contenders Graham-Kapowsin, Sumner and Puyallup.

“This is a good sign,” Jensen said. “These guys … don’t let big plays early in the game dictate the rest of the game, and (battle) through the adversity.”

Who knows – maybe it is Bellarmine Prep’s year to run through the league. It will get its biggest test next week against the Eagles.

“It is going to be a great game,” Warner said. “We’ll be ready for those guys.”