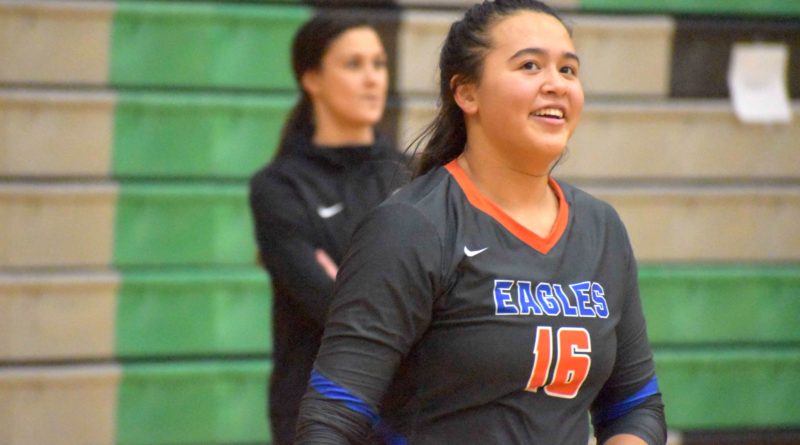 As contending teams position themselves for an October run to a league title – and postseason riches – that is usually the time top-tier talent shines on the volleyball court.

CLASS 4A VOLLEYBALL PLAYERS TO WATCH

An all-4A SPSL selection from her ninth-grade season on, the feared Eagles’ hitter has given recent verbal commitment to Illinois State.

Still just a junior for the high-powered Vikings, is hitting at .283 clip this fall. Has committed to play collegiately for the Air Force Academy.

The Vikings’ captain of an up-and-coming 4A SPSL group is off to a great start to 2021, converting on .270 of her offensive attempts.

Another junior that has solidified her future plans early, has committed to play indoor and beach volleyball at Florida State.

High court awareness has eased transition from middle blocker to the outside, where her athleticism makes her a dangerous attacker.

A force to be reckoned with, Gonzaga commit led the Storm to its first state tournament appearance in a decade two years ago (no state in 2020).

One of the main offensive threats for a deep Vikings squad, the 6-foot-11 hitter has added 54 kills so far this season to her career total of 228.

A digging machine that just understands where to be to rescue plays. The Vikings captain has 94 digs over her first 12 matches of the season.

Dominant offensive force for a squad that recently finished fifth at the Kent Classic has committed to play on the beach at USC.

The junior co-captain is hitting at a huge .466 percentage for Class 4A-contending Vikings team off to a 6-1 start this fall.

The Vikings’ co-captain presents an all-around threat for opponents – as a hitter and ball-handler (92 kills, 53 digs).

CLASS 3A VOLLEYBALL PLAYERS TO WATCH

All-state facilitator has been an impact performer from the time she first stepped on campus, and is leader for two-time Class 3A champions.

The 6-foot-2 force in the middle also hits on the outside for the Roughriders. Is committed to the Ivy League’s Columbia University for 2022.

Not just the younger sister of University of Washington’s Maeve Griffin, this right-side hitter fires away (.314 clip, 43 kills, 37 digs) for Seahawks.

The 6-foot-1 Hawaii-Hilo commit has the Hilanders off to a undefeated start in the 3A Greater St. Helens League.

A fierce competitor on the volleyball or basketball floor, the 6-foot-4 force inside has committed to play volleyball at the UW.

Averaging 4.4 kills per set, Mekelburg is hitting at a robust .401 clip. Already amassed 349 career kills to go with 111 service aces.

Standout offensive threat (.270 hitting clip) has Panthers right in the thick of it in the Greater Spokane League, leading upset of Mount Spokane.

At 5-foot-8, not the biggest hitter outside. But hops and anticipation work well – she has 112 kills already for the Saints.

CLASS 2A VOLLEYBALL PLAYERS TO WATCH

Seen this name before? She is the younger sister of Allie (Baylor) – and now it is her turn to be the tall (6-foot-5) defensive wall ready to stifle attacks.

Quickly established herself as one of the rising attackers in the state as a ninth grader, and has continued to pace the offense for the Bulldogs.

The engine that makes the two-time defending state champion Spudders go, she has facilitated the attack that beats 4A and 3A schools regularly.

Don’t let the 5-foot-6 frame fool you, she easily elevates over blocks for offense – and gives the Patriots a go-to attacker in the 2A SPSL.

Consistent all-NWC first-teamer registered back-to-back seasons of 900-plus assists during her first two full years – and on pace for that again,

Ability to hit various shots when necessary, she attacks defenses at different angles. Consistent presence on defense and at the serve line.

As if Spudders needed it – another dominant offensive force for a squad that recently captured Kent Classic title; USC beach volleyball commit.

All-around player also sees time at setter – and produces wherever she is for Nighthawks (70 kills, .307 hitting clip; 88 digs, 30 assists).

Can do it all – hit, pass and serve. Became the second Marble sister to bring home Class 2B state title (2019) playing for mom, Suzanne.

One of two all-Caribou Trail first-team performers returning this fall. Standberg is a massive-upside athlete who can take over a match.