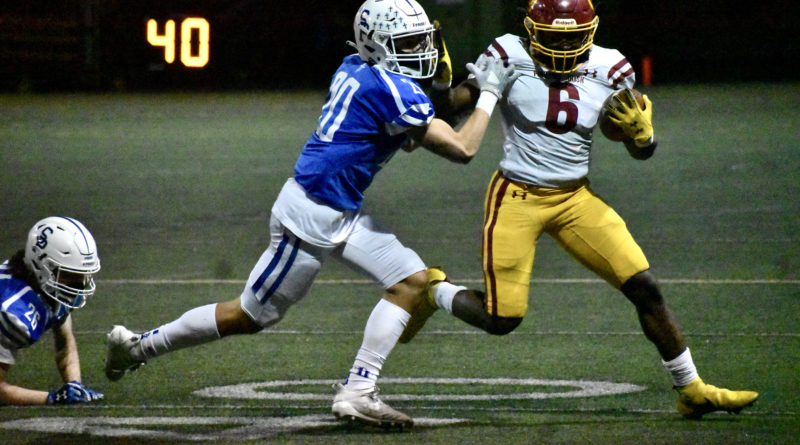 The calendar is about to turn to October, which means league championship races will hit a different gear.

This week, one might very well be decided – the 3A Wesco – when eighth-ranked Ferndale visits No. 6 Marysville-Pilchuck on Friday night.

Here is a quick recap of last week’s highlights, and a look forward to Week 5 storylines and games to follow:

THREE THINGS WORTH REVISITING FROM WEEK 4

Central Valley coach Ryan Butner had just witnessed Texas A&M commit Ethan Moczulski convert two onside kicks for Mount Spokane – and now the teenager was lining up for a 60-yard field goal to beat the Bears on the final play. Heart racing? Butner said he stayed calm, and later admitted he purposely didn’t call a timeout to try and ice him “because in the moment … they had to rush it” with no timeouts. “He overswung and pulled it,” Butner said. “And I finally exhaled.”

Maybe there was a reason why junior Gabarri Johnson was receiving FBS offers before making his first varsity start at quarterback for Lincoln of Tacoma last spring – he’s talented. And that is showing up this fall (1,238 passing yards, 254 rushing yards, 19 total TDs), and is coming off a big outing in win over then-No. 4 Spanaway Lake. “He’s comfortable with the offense and the scheme now,” Abes coach Masaki Matsumoto said. “He’s more confident with a year under his belt.”

Dylan Spicer shows D.K Metcalf side of his skills at linebacker

Tenino coach Cary Nagel said when linebacker Dylan Spicer “decides he wants to go – he goes” – and that burst likely saved a win Friday against reigning Class 2B champion Onalaska. Loggers standout Marshall Haight busted through the line and was headed to the end zone on the final play of the first half when Spicer chased him down to knock him out of bounds at the half-inch line. It kept Onalaska’s lead at 14-6 – and Tenino rallied for a 20-14 victory.

You rarely see games with this level of importance on the first day of October – but the winner between Chiawana and Richland is in the driver’s seat for the 4A Mid-Columbia Conference’s final playoff berth behind Kamiakin. Expect both quarterbacks – JP Zamora, of the Riverhawks, and Cameron Kitchens, of the Bombers, to sling it around often at the Bomber Bowl. “This is a playoff game, no question about it,” Richland coach Mike Neidhold said. “You cannot look at it any other way.”

Editor’s note: Later in the week after this Week 5 primer published, the WIAA revealed that the MCC/GSL, indeed, has three playoff allocations this fall, not two.

State’s biggest surprise 4A unbeaten? It is Redmond

There was 10 undefeated teams remaining in Class 4A – and Redmond is one of them. The Mustangs, who face No. 8 Eastlake on Friday, are well on their way to a first winning season in the 4A KingCo since 2007 under second-year coach Lance Delay, a transplant from Texas. When he took over, the program had 32 kids. Now, it has more than 80. “We are trying to build a foundation,” Delay said. “Every week, we are trying to take another step.”

Also at 4-0, don’t forget about rising Kamiak in 4A Wesco

Bryant Thomas isn’t sure his Kamiak squad is ready to battle Lake Stevens and Glacier Peak for 4A Wesco supremacy, but he does think the Knights can earn a postseason berth – especially after their strong start. “There are levels to the progression,” Thomas said. “Do I think we’ve got the talent and pieces to do something? Yes.” Wide receiver Wesley Garrett is a rushing-receiving playmaker, and quarterback Ben’tre Worthy gives jet-sweep offense a passing element.

Skinny: Wasn’t more than a few months ago both squads were throwing the football with ease and efficiency. Now, the offenses are a tad more conservative – at least in early going of KingCo4A fall.

Skinny: Could be a quick encounter between two rushing offenses – Ferndale’s Wing-T attack vs. the Tomahawks’ Slot-T offense. Great running backs in this one with Isaiah Carlson (Ferndale) and Dylan Carson (M-P).

Skinny: You could say O’Dea tailback Jason Brown officially arrived in last spring’s Metro League title game against these Panthers (247 yards, three TDs) – a 49-7 win. Seattle Prep cannot have a repeat of that to win.