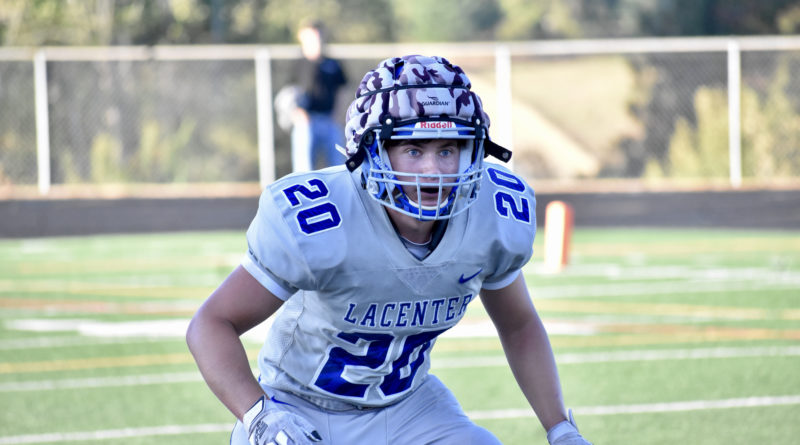 LA CENTER, Wash. — As the head coach of a Class 1A football program in a small city just north of Vancouver, John Lambert has a pretty good idea when a standout player is about to come through La Center High School.

Sometimes that player is a local youth standout. Sometimes the player grows up in his own home, like recently graduated three-year starting QB/LB Tom Lambert.

But sometimes, that player is discovered at a middle school recess.

When the Wildcats (2-2) take the field this fall, Ben Rembisz can hardly remember why he was never drawn to football during his childhood. The now-6-foot, 195-pound junior surprises himself recounting his path to the gridiron.

Once a scrawny freshman soccer player, his decision to give kicking a go despite not having a background playing football ended with him becoming the team’s kicker, starting linebacker, wide receiver and O-lineman.

Word first began to spread about his kicking abilities when Rembisz was in middle school. He grew up playing club soccer and one day at recess, classmates on the football team asked him to try kicking a field goal.

“I can’t remember how far back I was, but I was back aways and I drilled it though the uprights, hit the portable and I’m like ‘that’s pretty cool’ and everyone’s just looking at me,” Rembisz said. “So that was when I kind of started realizing that I can kick a football pretty well.”

Turned out, La Center was looking for kickers. Lambert has players check to see if there are any middle school kicking prospects who don’t have a football background. Word of Rembisz’ recess prowess reached Sean Fox, who was then the Wildcats’ soccer player-turned kicker, and trickled up to the Lambert.

Drawn to being a part of the the spectacle of high school football, Rembisz joined the team as a freshman and become Fox’s backup.

“The overall environment of football, the fans, the energy it brings, soccer always had that energy, but it wasn’t amped up like football,” Rembisz sad. “The feeling of Friday Night Lights, the energy, it was such a cool experience.”

But he stood at 5-foot-10, weighed about 150 pounds and knew if he wanted to be relied on in the future to make open field tackles on kickoffs, he’d need to commit to the weight room.

When COVID-19 pandemic hit, Rembisz starting lifting daily. He developed a routine, stuck to it and re-tooled his body. By the start of his junior season, Rembisz weighed in around 200 pounds.

“It became almost a comfort to me during COVID,” Rembisz said. “It was kind of my release.”

It was also the Wildcats’ gain.

When a starting receiver went down with an injury, Lambert looked up and down his roster and plucked the next most athletic player, Rembisz, who had never even played receiver, let alone any skill position.

“We’re like Ben, you’re stronger than the rest of the guys, you’re the best fit for this,” Lambert said, “and he’s like, ‘yeah, I’ll do whatever for the team.’ Those are the kind of guys you want to show to other players.”

When a starting O-lineman went down with an injury in the Wildcats’ 35-13 loss to No. 2 Eatonville on Friday, Rembisz stepped in against perhaps the most imposing Class 1A defense front in the state.

The future is the brightest as a kicker. He’s developed into a college kicking prospect, and was selected for the invite-only Chris Sailer Kicking Underclassmen Invitational in July after being selected to the first team all-1A Trico League.

That all started with one brow-raising showing after another booting field goals through the uprights at recess.

Learning new positions on the fly and playing all over the field can be tough, he admits, but Rembisz enjoys the challenge — especially if it helps his team. He no longer plays club soccer, and didn’t play for his high school team as a freshman in order to focus on football, but he plans on going out for the team in the spring.

“Caching footballs isn’t always about getting the stud athlete coming in and nurturing that,” Lambert said. “It’s seeing the kids who didn’t think they could play, or didn’t know they wanted to play, then become really passionate about it.”