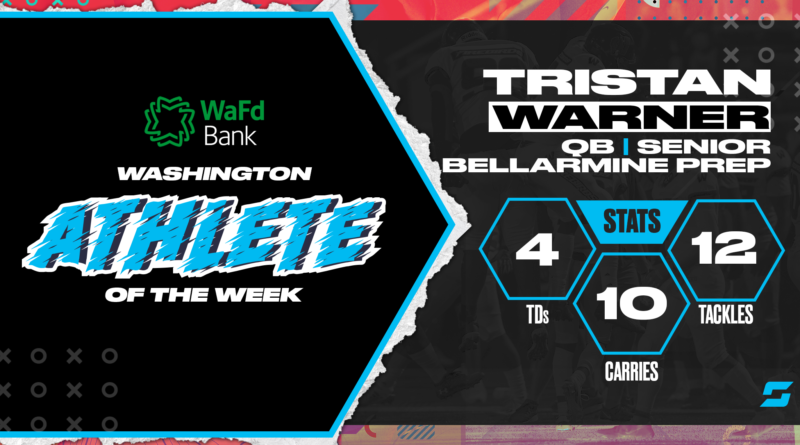 The senior moved into the backfield and rushed for 223 yards and four touchdowns on 10 carries in a 42-27 win over Curtis. He also had 12 tackles, a forced fumble and a fumble recovery on defense.

Warner received 40.16% of the vote, beating out Shadle Park’s Tryson Town who finished second with 19.54%. Mt. Spokane’s Jordan Sands finished third with 8.75% and Kamiakin’s EJ Hawkins finished fourth with 7.47% . There were over 52,000 votes tallied this week!

Delp had 19 kills and four blocks to lead North Central to a straight-set sweep of East Valley.

Faamausili had 37 assists, 12 digs and 6 kills in a straight-set victory over Tumwater.

Finnegan had eight kills and 16 digs in Gonzaga Prep’s straight-set victory over Mead.

Ammons scored four goals and added an assist in an 8-0 win over Steilacoom.

Turned 14 carries into 105 rushing yards and two touchdowns in a 35-15 win over Columbia River.

Even in a game where the sophomore phenom seemed a little quiet, he still tallied 209 rushing yards on 27 carries in a loss to Lake Stevens.

Completed 23 of 38 pass attempts for 320 yards, three touchdowns and an interception in a 34-20 loss to 3A power Kennewick, per The Yakima Herald-Republic.

Had an interception and a fumble recovery in an impressive 20-3 win over O’Dea to open the season.

Scored five first half touchdowns to help Cashmere ease past Granite Falls, including a 90-yard touchdown on a reverse, reports The Wenatchee World.

Tossed for 179 yards on 9 of 18 passing, 12 carries for 78 rushing yards and four total touchdowns in a win over Evergreen of Vancouver, reports The Chronicle.

Completed 27 of 47 pass attempts for 420 yards and three touchdowns in a 63-21 loss to Idaho’s Lewiston, reports The Yakima Herald-Republic.

Had an interception, along with a 70-yard rushing touchdowns and a 70-yard receiving score in a 20-3 win over O’Dea.

Blocked a punt for a safety, pulled in diving catches for 38 and 34 yards, and 11-yard touchdown reception — 99 yards total — in a blowout win over Richland.

Had an interception, a blocked punt and a nine-yard touchdown catch in the fourth quarter of a 35-0 win over No. 7 Hockinson.

Accounted for six total touchdowns in a 78-36 win over Charles Wright.

The junior caught eight passes for 137 yards and three touchdowns in a 28-24 loss to Olympic.

Turned 29 carries into 183 rushing yards and two touchdowns in a 49-7 thrashing of Woodinville on Thursday.

Tallied 288 rushing yards on 32 carries and three touchdowns in a 34-20 win over West Valley of Yakima, per The Yakima Herald-Republic.

Rushed for 222 yards on 23 carries, completed 17 of 30 pass attempts for 181 yards in the air and accounted for six total touchdowns — three passing, three rushing — in a 43-42 OT loss to Idaho power Coeur d’Alene.

Connected 13 of 18 pass attempts for 219 yards and four touchdowns in a thrashing of Richland, bringing his season touchdown total to 12 through three games.

Had nine catches for 149 yards, a touchdown an interception and two tackles in a 41-0 season debut over Franklin Pierce.

Rushed for a career-high 106 yards on just nine carries, fueled by a 74-yard touchdown run in a 15-12 win over Squalicum, according to Whatcom Preps.

Rushed for 72 yards and two total touchdowns, which included an 86-yard kick return for touchdowns in a 34-28 win over Chelan, per The Spokesman-Review.

Senior QB Tossed eight touchdown passes for a career-high 381 yards on 20 of 25 passing in a 59-7 win over Wahluke, per The Yakima Herald-Republic.

To continue his red-hot start to the season, the two-way standout had 225 yards rushing on 23 carries and an interception for touchdown in a 38-20 win over Timberline.

Hauled in six passed for 176 receiving yards and two touchdowns  in a 41-0 win over Ridgeline, according to The Spokesman-Review.

Rushed for 160 yards and three touchdowns in a 42-20 win over Rogers of Spokane, per The Spokesman-Review.

Logged 99 rushing yards on seven carries and two touchdowns, one a 44-yard run, in a 28-6 win over South Whidbey, according to Whatcom Preps.

Caught a 73-yard touchdown pass to help the Panthers pull away from Mount Baker late.

Followed up a dominant Week 2 performance by logging more than 100 yards on the ground, 79 receiving and four total touchdowns in a 44-7 win over Bishop Blanchet.